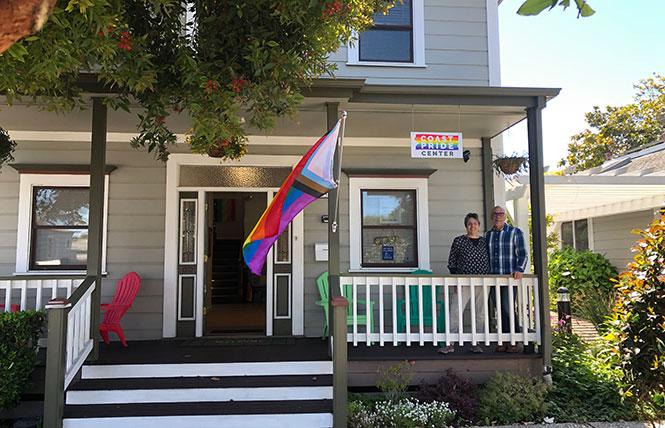 With $35,000 from San Mateo County and donations from community supporters, the new CoastPride Community Center in Half Moon Bay surpassed its fundraising goal of $75,000 and plans to hire a part-time administrator to help oversee the LGBTQ facility on a one-year contract.

Located in a prime spot in the coastal city's downtown district, the LGBTQ center officially opened its doors June 1 and launched the fundraising drive to help support its operations. The all-volunteer run group CoastPride launched in August 2019 with the goal to not only bring services to LGBTQ residents between Pacifica and Pescadero but also to open its own center.

At the request of Supervisor Don Horsley, who represents the coastal communities, the Board of Supervisors unanimously voted June 29 to award CoastPride the money from the county's Measure K funds. The countywide half-cent sales tax extension passed by voters in November 2016 supports essential services, facilities, and local needs.

"June 30 is really the end of Pride Month, so it is really appropriate to be bringing forth this item," Horsley, who attended the center's ribbon-cutting ceremony, said Tuesday. "The dedicated volunteers and board at CoastPride have grown the organization over the last two years and they are making services available and accessible to a more diverse coastside community."

He wrote that his office "stands with CoastPride in representing all who are fortunate to live or visit the Coastside. We celebrate the people of all sexual orientations, gender identities, and expression and welcome them here."

As the Bay Area Reporter noted in a story about the newest Bay Area LGBTQ community center in its June 24 Pride issue, it was a needs assessment that San Mateo County was conducting to better serve LGBTQ coastal residents that led to the formation of CoastPride. In a phone interview Horsley told the B.A.R. that he had a staff person present at the meeting and had pledged to lend his support to the leaders of CoastPride when they formed the organization and began laying the groundwork to open a dedicated facility to host their programs and services.

"This is an opportunity for me to make good on a promise to be a help," said Horsley of the county's funding allocation.

Having the CoastPride center located in the heart of Half Moon Bay provides a space most people on the coast can easily access, particularly seniors, youth and those without a car.

"For young people, it is not really easy to get into a car and go over the hill," Horsley noted.

CoastPride co-founder Jenny Walter thanked the supervisors for their financially supporting the LGBTQ center as it works to expand its hours and programming.

"On behalf of the CoastPride board I am extremely grateful to all of you for your consideration of this resolution," said Walter, who is bisexual and, with her wife, Deb Hedger, raised the couple's now 18-year-old daughter Jessie in Half Moon Bay. "Without your work in establishing the LGBTQ commission and all of our work trying to establish the Pride Center in San Mateo County, we just wouldn't be here today opening up the CoastPride center."

Walter, who served as a co-chair of the county's LGBTQ commission, stressed to the B.A.R. that the money from the county and that raised through public donations will only allow the new LGBTQ center to hire someone on a part-time basis for 12 months. The CoastPride board will need to continue raising funds in order to extend the person's employment and increase their hours.

CoastPride had set an initial operating budget of $55,000 for its first-year in operation. The center, located in a two-story building at 711 Main Street, is currently open from 2 to 6 p.m. Mondays, Wednesdays, and Fridays and from noon to 4 p.m. Saturdays.

To learn more about CoastPride, and the activities and services it is offering at its community center, visit https://coastpride.org/

Wiener secures $1.5M for Milk plaza project
In the budget bill adopted Tuesday by the California Legislature, gay state Senator Scott Wiener (D-San Francisco) secured an additional $1.5 million for the proposed renovation of Harvey Milk Plaza above the Castro Muni station in San Francisco's LGBTQ district. Governor Gavin Newsom still has to sign off on the budget before the funding is finalized.

In 2019, Wiener secured $1 million in state funding for the controversial project that calls for a revamp of the public parklet at the corner of Castro and Market streets so it provides an improved memorial for the late gay San Francisco supervisor who was assassinated in 1978. The Friends of Harvey Milk Plaza group has cycled through a number of architectural consultants since the effort to redesign the space launched in 2017.

Costs for the renovation have been pegged at around $10 million, with the bulk expected to come from private donors. Detractors of the plan have argued a far less costly cosmetic upgrade that maintains the current design of the space could be undertaken instead of demolishing portions of the plaza, which they argue should become a city landmark.

Last week, the international landscape, architecture, planning, and urban design firm SWA Group revealed the latest preliminary designs for how it proposes to alter the look of the plaza. A larger gathering space would front Castro Street with a smaller entranceway built for the subway station. New walkways would be built on either side of the stairway and escalator into the Muni stop, which would sport a reimagined tribute to Milk, the first LGBTQ elected official in both the city and state of California.

Asked by the B.A.R. why he sought the additional money for the Milk plaza project, Wiener stated, "As a longtime resident of the Castro and a gay man, I see Harvey Milk Plaza as an important community gathering place, and a way to remember Harvey and his contributions to our city and to LGBTQ rights. Harvey Milk Plaza will be a special memorial and space for San Francisco, and I am proud to support its design and construction."

The funding was part of more than $17 million Wiener secured for various projects in the city, including $1.7 million for the San Francisco Gay Men's Chorus's National LGBTQ Center for the Arts on Valencia Street and $4.2 million for a San Francisco meth sobering center.

"These programs, nonprofits, parks and plazas are so important to the fabric of our community, and it is truly an honor to champion their causes in the Senate," stated Wiener in announcing the funding allocations.

Web Extra: For more queer political news, be sure to check http://www.ebar.com Monday mornings for Political Notes, the notebook's online companion. This week's column reported on the swearing in of the members to the revived LGBTQ advisory committee for the San Francisco Human Rights Commission.