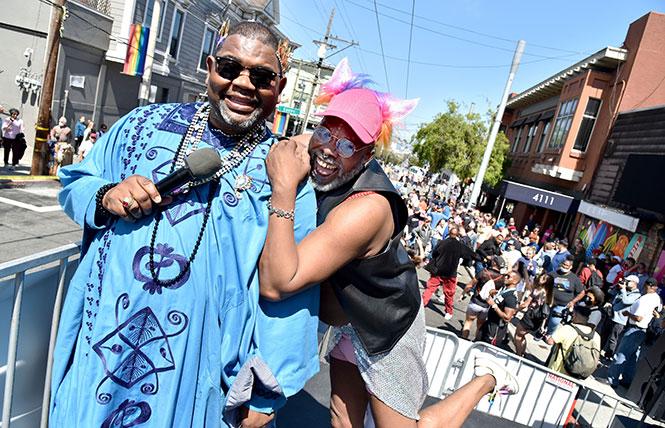 There were "no significant incidents" of crime in the Castro neighborhood during LGBTQ Pride weekend June 25-27, according to San Francisco Police Department Mission Station Captain Rachel Moran.

"I think it went really well," Moran, a straight ally, said. "We saw about 25,000 people in Castro between Dolores Park and Castro Street and no significant incidents."

That number was "over 100,000" on Pride weekends in pre-pandemic years, Moran added.

Moran didn't want to answer if she was surprised about the lack of significant crime, but did say she was "thankful."

Two reported incidents in the Castro area turned up on the SFPD's daily crime logs.

On June 27, around 5 a.m., three suspects allegedly stole a backpack out of a victim's car on the 2300 block of Market Street (between 16th and 17th streets). The backpack contained clothing, among other items.

"One of the suspects was known to the victim," Moran said, adding that she wouldn't consider it to be related to the weekend's festivities.

A second episode allegedly occurred June 27 at 9:45 p.m., when gunfire rang out near Corona Heights Park.

Moran said that she doesn't consider Corona Heights Park to be "in the footprint of the Pride events."

"People were happy and thanked us for being there," Moran said, adding that while things went smoothly, officers were definitely tired after a long weekend, too.

"I think the weekend went well," Mandelman said. "I think having Soul of Pride was a highlight; it was lovely having them in the neighborhood. Frameline was a hit, and I think in general, people are ready for the pandemic to be over, so there was a lot of joy and people looking to a brighter future."

As the B.A.R. previously reported, the urban global village stage powered by Soul of Pride set up on 18th Street between Castro and Collingwood streets on Saturday, June 26.

Mandelman said that while the weekend didn't have the overwhelming nature of past Prides, the entire month of June was nonetheless filled with "an abundance of smaller, sweet events." He specifically mentioned the People's March down Polk Street to City Hall Sunday, June 27, and the rally for longtime labor stalwart Allan Baird in the Castro Friday, June 25.

"There were a lot of nice parts to Pride 2021," Mandelman said. "No giant, big parade but we had community-directed events and a lot of great parties, too."