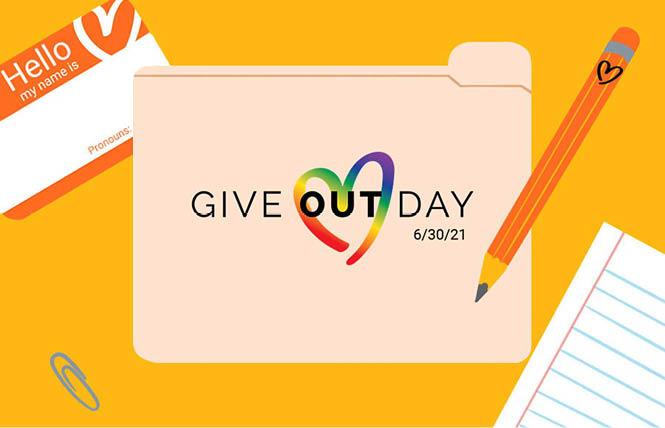 As Pride Month comes to a close June 30, LGBTQ giving circles are among those groups drawing attention to Give OUT Day, a time for charitable giving to queer causes.

According to San Francisco-based Horizons Foundation, which hosts the event, Give OUT Day, has raised millions for LGBTQ+ nonprofits nationwide. Sara Lomelin, an ally who is the executive director of Philanthropy Together, is using the occasion to highlight giving circles, which Lomelin said have increased in recent years.

"Basically the simple explanation is that a giving circle is a group of people with shared values who get together to ... pool donations, time, talent, and testimony to decide what they want to support," she told the Bay Area Reporter. "Instead of friends giving to all different organizations, you come together and the impression is larger. Giving circles are one of the most effective ways to liberate capital and turn individual dollars into community power."

Alice Hom, a queer woman who co-founded Beyond Two Cents, told the B.A.R. that the Bay Area giving circle "came out of a need that there is right now for funding LGBTQ API [Asian Pacific Islander] groups" when it formally began in 2018.

A. Sparks, a lesbian who is a member of the circle, said that the name comes from the statistic that less than two cents of $100 in LGBTQ philanthropy goes to the API community specifically.

"We really want to push our LGBTQ community beyond the two cents we're getting," Sparks said.

Added Hom: "It's pennies on a hundred dollars, not even on the dollar. It's terrible, and that's why Give OUT Day is so important, because institutional philanthropy often doesn't reach the grassroots."

Hom said that unlike some institutional philanthropic charitable giving, the circle gives to groups like API Equality — Northern California without restricting the funds to a particular program.

APIENC did not respond to a request for comment by press time.

"We give grants and say 'here's a chunk of money, do what you want with it,'" Hom said.

Added Sparks: "We very purposefully give our grants unrestricted. Being from the community, we understand that the folks in the community know the best solutions."

Beyond Two Cents is composed of "seven to 10" people, Hom said, and has given $80,000 in total grants over the past three years.

"It's kind of incredible," Hom said. "All our members sign up for three years and agree, personally, to give $1,000 to $1,100 each year. Some people are now in their second three-year term.

"I'm not Jeff Bezos, but my $100, $200 pooled with others can make a big difference," Hom added, referring to the billionaire owner of Amazon and the Washington Post who is the richest man in the world.

Making a big difference on the other side of the country is Wayne Green, the founder of Kavod, which is a gay Jewish giving circle in New York.

Green was inspired to create Kavod after going to a 2019 event convened by Philanthropy Together.

"We started recruitment in the early part of last year," Green said, but due to the onset of the COVID-19 pandemic the group was unable to really connect until July 2020.

"When COVID started, I thought 'we can still meet and do strategic philanthropy online,'" Green said. "That gave us the opportunity to open it up beyond gay men in New York and so we had folks in Boston and San Francisco who attended."

Last year, Kavod supported a homeless shelter for trans youth. The group's members also "bought tablets for the elderly community to connect with their families and community," Green said.

"I'm hoping we expand," Green said. "We want to look at opportunities when in-person experiences come back and think about the things we want to engage with going forward."

Lomelin said that Philanthropy Together's website has a directory of giving circles for folks who want to get involved.

"If you don't find something that interests you, find your own giving circle," Lomelin added.

For more on Give OUT Day, click here or check the website or social media of your favorite LGBTQ nonprofit to see if they're participating.

LGBTQ Agenda is an online column that appears weekly. Got a tip on queer news? Contact John Ferrannini at j.ferrannini@ebar.com. Due to the Fourth of July holiday, the column will return July 13.