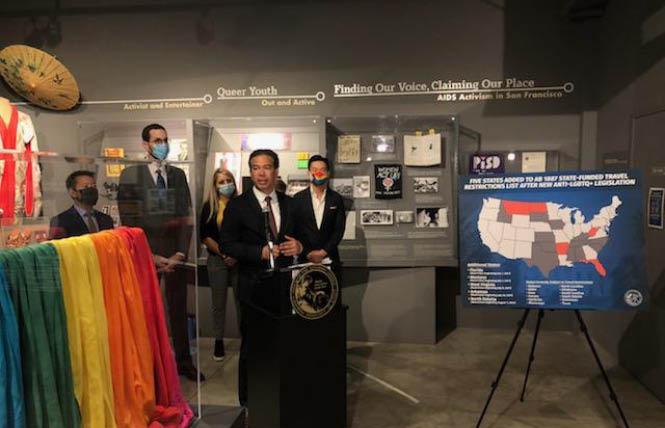 Nearly a third of the country will soon be off limits for California state employees to travel to on the taxpayer dime unless their trip is deemed essential, such as sending emergency assistance in response to a natural disaster. The travel restriction come August will cover 17 states that have enacted anti-LGBTQ laws since 2015.

The travel restrictions to Florida and Montana take effect July 1 and will be official on July 8 for West Virginia. The ban for Arkansas kicks in on July 29 and for North Dakota on August 1.

Their addition to the travel ban list had been expected, as Bonta's office told the Bay Area Reporter at the start of Pride Month that he intended to "continue to implement AB 1887 and push back against LGBTQ+ discrimination."

Bonta was among the state Assembly members who adopted Assembly Bill 1887 back in 2015 that banned state-funded travel to states that discriminate against LGBTQ people. Authored by gay Assemblyman Evan Low (D-Campbell) and signed into law by former governor Jerry Brown, the restriction on travel covers government workers, academics, and college sports teams at public universities.

"It is heartbreaking, truly heartbreaking to see the expansion of the list," Low told the B.A.R., adding that he draws "zero pleasure" from having to attend news conferences like Monday's. "This is about a statement of values."

Announcing the expansion of the banned travel list at the GLBT Historical Society Museum in the heart of San Francisco's LGBTQ Castro district, Bonta called the passage of the anti-LGBTQ laws in the quintet of states "part of a recent dangerous wave" of such bills being introduced in statehouses across the country this year.

As of June more than 250 anti-LGBT bills had been introduced in state legislatures, with at least 95 specifically targeting the rights of "transgender Americans," said Bonta, who noted his announcement was coinciding with the date of the uprising against police harassment by the patrons of the Manhattan gay bar. Their actions kicked off the wider fight for LGBTQ rights in America.

"That same fight remains alive and well in this country," said Bonta.

Joining Bonta was San Diego resident Ryland Whittington, 13, a transgender eighth grade athlete, and his mother, Hillary Whittington. An ice hockey player who said he was missing his water polo practice in order to attend the San Francisco news conference, Ryland said his "being transgender is just a small part of who I am."

Thankful that he has never been told he couldn't play on a sports team in his hometown, Ryland said he also knows he is "lucky to live in California. I am lucky to have friends and family who support me."

To the lawmakers supporting legislation that restricts students like him to only participate on sports teams based on the gender they were assigned at birth, Ryland said he and other trans youth "just want the same rights as everybody else."

Gay state Senator Scott Wiener (D-San Francisco) lashed out at his legislative counterparts, mostly Republicans, who are drafting and supporting such laws and the Republican political consultants advising them to do so.

"It is outrageous," said Wiener. "These are just children trying to live their lives."

Two of the more popular states for groups to hold their gatherings and sporting competitions in — Texas and Florida — will now be on California's banned travel list. State officials and college sports teams have found ways to get around the travel prohibition by having alumni associations or other groups pay for their travel costs to attend athletic matches or conferences in the banned states.

State employees can take time off to attend conferences or other events in the banned states but must pay out of their own pocket for their travel there and other related expenses. Low told the B.A.R. he not only has had to decline to attend events in the states on the list but also has taken to social media to ask other attendees to cancel, such as when a tech conference was held in Austin, Texas a few years back.

"This is about values and about the impact of having a conversation like this," said Low, who noted the travel ban law also protects state employees from being sent to states where they could be discriminated against.

Just as her own family is now avoiding travel to the states on the banned list, Hillary Whittington told the B.A.R. she hopes other Californians, whether they work for the state or not, will also refuse to go to those states until they repeal their anti-LGBTQ laws.

"I feel like we should all follow suit," she said. "I would love to see all Americans restrict their travel from these places."

Plea for Equality Act
Whittington also called on the U.S. Senate to pass the Equality Act, a federal comprehensive LGBTQ rights bill that passed the House earlier this year. President Joe Biden has pledged to sign it into law, but it remains stuck in the Senate due to Republican opposition. Its only hope of being passed is if 10 GOP Senators join with Democrats to overturn a filibuster of the bill, or if Democrats get rid of the filibuster; most observers don't see either happening.

"We need the Equality Act to be passed," said Whittington. "This is insane we are dealing with this in 2021."

When governors of other states enact anti-LGBTQ laws, it is up to the office of the California attorney general to review them to see if it triggers placing those states on the no-fly list. At the moment the 12 states on California's list are Alabama, Idaho, Iowa, Kansas, Kentucky, Mississippi, North Carolina, Oklahoma, South Carolina, South Dakota, Tennessee, and Texas.

West Virginia is being added due to Governor Jim Justice, a Republican, in late April signing into law House Bill 3293, which bans transgender girls and women from participating in sports at the elementary, secondary, or post-secondary level consistent with their gender identity. State-funded travel to Florida is being banned due to Governor Ron DeSantis (R) signing similar legislation into law June 1.

Montana is joining the list because Governor Greg Gianforte (R) in May also signed a trans youth sports ban into law. In April he had also signed into law Senate Bill 215, which LGBTQ advocates contend is an expansive religious refusal bill that could grant a license to discriminate against Montanans and visitors, including LGBTQ people, people of faith, and women, across a wide range of goods and services in the state.

He also enacted SB 289 that allows medical providers to deny care to LGBTQ people and House Bill 1570, the first law in the nation that prohibits physicians from providing gender-affirming health care to transgender minors no matter the wishes of their parents or if such care is deemed to be medically necessary.