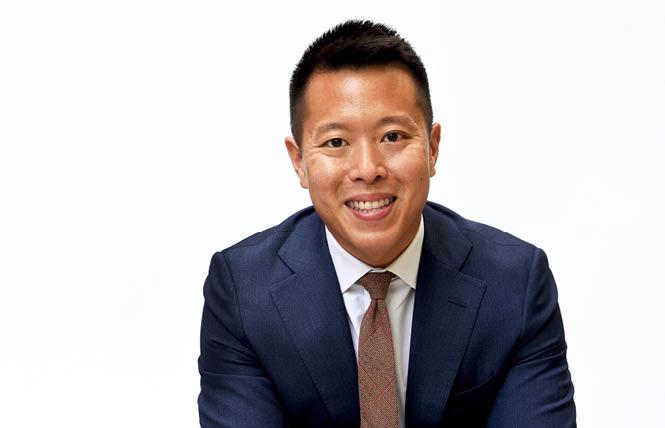 Equality California has named its managing director, Tony Hoang, as its first Asian American executive director. Hoang will be the third out gay man of color to oversee the country's largest statewide LGBTQ advocacy organization.

At 31, Hoang will also be the youngest person to lead EQCA, its political action committee, and its educational arm the Equality California Institute. He will succeed Rick Chavez Zbur, who plans to step down at the end of the year to focus on his race for an open state Assembly seat in the Los Angeles area.

While attending the University of Southern California Hoang first joined EQCA as a field intern in 2009. It led to a 12-year career with the organization, as Hoang rose through the ranks as EQCA's database and volunteer manager, director of operations, chief of staff, managing director, and now its executive director-designate.

"My whole career has been in the LGBTQ+ movement," Hoang noted in a phone interview Tuesday with the Bay Area Reporter ahead of the announcement of his being selected Zbur's successor.

Hoang will join the handful of other out Asian and Pacific Islander leaders of prominent LGBTQ groups when he takes over at EQCA. Among them are Andy Marra with the Transgender Legal Defense and Education Fund, Kris Hayashi of the Transgender Law Center, and Lance Toma with the San Francisco Community Health Center. His being selected as executive director also coincides with a rise in violence targeted at the country's API community largely due to the COVID pandemic.

"I just am really humbled and honored the board and the organization believed in my leadership to allow me to step up and lead this organization," said Hoang. "EQCA being the largest statewide LGBTQ civil rights organization, we are a leader in the movement, and having a young person of color leading this movement shows the organization is meeting the moment just as this country is having a reckoning with racial injustice."

Michael Nguyen, a gay man who chairs the Bay Area-based GLBTQ+ Asian Pacific Islander Alliance, told the B.A.R. his organization is "proud and happy" for Hoang, whom he first met in 2017 during a lobby day EQCA sponsored at the state Capitol.

"I think it is a wonderful, huge moment for representation, for statewide advocacy, and for our LGBT family. To have an API person as the next designated executive director of EQCA is a wonderful moment for all of us," said Nguyen, who has helped organize several local rallies decrying the hatred and recent attacks focused on APIs. "I am very excited and proud for Tony and all the work he has been doing for us statewide."

Gay Assemblyman Evan Low (D-Campbell), the first out API elected to the state Legislature, praised the decision by EQCA's board to select Hoang as the next ED.

"Anyone who follows someone as passionate and talented as Rick Chavez Zbur would have enormous shoes to fill, but Equality California identified an excellent successor in Tony Hoang," said Low, the current chair of the California Legislative LGBTQ Caucus that works closely with EQCA on passing legislation and electing out members of the Legislature. "With his extensive record of grassroots organizing and activism on behalf of the LGBTQ+ community, I have no doubt that Tony will help usher in a new era of equality and racial justice in California."

Zbur called Hoang "an invaluable partner" during his time with EQCA. He came on board as its executive director September 1, 2014.

"There is no person better equipped to honor the organization's legacy and continue building for the future than Tony, and I am so excited to see him step into this role," said Zbur. "Our community and the movement are in great hands."

A son of immigrants
Hoang's parents were refugees of the Vietnam War who left their native country for America with no support. As he recounts in a short video EQCA released in conjunction with his promotion announcement, Hoang notes his mother and father scraped together enough money to start several small businesses that allowed them to provide "a good life" to himself and his sister in the town where they grew up outside Houston.

"The son of Vietnam War refugees and the first person in his family to attend college, Tony is a proud first-generation immigrant who grew up understanding the marginalized intersections of sexual orientation, gender, race, immigration status and class," they stated. "Tony is the perfect leader to take the helm at this critical time for our community and the nation, and we look forward to working with him as he takes on this new endeavor."

Governor Gavin Newsom, whose administration has worked closely with EQCA over the past two years, also referred to Hoang's familial experience in praising his being chosen to lead the organization.

"Tony's life reflects the California spirit: a son of refugees, the first in his family to graduate from college and a tireless advocate for equality and justice," stated Newsom. "I am confident that the LGBTQ community will be well-served by his leadership, and I look forward to working with him to advance our collective vision of a California for all."

Asked by the B.A.R. if he would look to increase the types of support and services EQCA offers to LGBTQ immigrants, refugees, and asylum seekers, Hoang said it is something he will be discussing with the board as he plans to transition into his new role. He noted EQCA has been addressing immigration issues since the Obama administration.

"We definitely will continue to make it a priority issue for us as an organization as we have in the past," said Hoang.

Hoang has lived in downtown Los Angeles for a decade and now shares a home with his fiancé Ian Grady, an attorney. The couple plans to wed in 2022 and intends to take part in the AIDS/LifeCycle fundraiser for the San Francisco AIDS Foundation and Los Angeles LGBT Center should it be held next year.

(Hoang, who has done the ride at least three times, is not taking part this year. It is again being held virtually in 2021 due to the health crisis.)

EQCA's board and Hoang are still negotiating what his salary will be as executive director. According to its most public tax forms, from 2018, Zbur's salary was $259,000 while Hoang was paid $153,287. They, along with EQCA's other staff, took 10% pay cuts in 2020 due to the COVID pandemic disrupting its fundraising efforts.