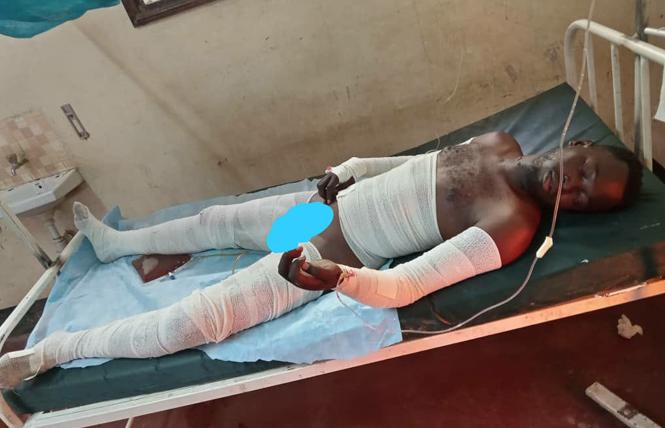 Atuhwera suffered severe burns from a firebomb attack on Block 13, where a group of LGBTQ refugees live at Kakuma, during the early hours of March 15.

The 22-year-old gay activist's death at 11:30 a.m. local time April 12 was due to complications caused by burn wounds and lack of proper treatment, according to gay African activists.

Atuhwera, who used the alias "Trinidad Jerry" online, was one of two victims who suffered severe burn injuries from the attack, according to an April 12 joint news release from a coalition of African LGBTQ organizations.

Fellow Ugandan gay refugee activist, Jordan Ayesigye, remains in critical condition at Kenyatta National Hospital in Nairobi. The two men were airlifted from Lodwar Hospital near the camp to the hospital in Nairobi March 19 to receive treatment for their injuries, according to the release.

The airlift resulted from pressure put on United Nations High Commissioner for Refugees officials by a social media campaign, the activists said.

According to an unpublished April 11 release obtained by the Bay Area Reporter, Ayesigye "remains without a caregiver and in unsterile conditions where he's prone to infection and inadequate care."

The activists expressed concern that "[Ayesigye's] condition could also take a sharp turn for the worse at any given moment."

They deny UNHCR officials' claims that Ayesigye is receiving adequate care and is "fit for discharge," according to the release. Activists demanded that the agency immediately transfer Ayesigye to a hospital in a safe country where he can receive adequate care.

Irungu Houghton, executive director at Amnesty International Kenya, believed Atuhwera's death was preventable. In an April 13 statement from the organization, Houghton called for an investigation into the firebombing of the LGBTQ+ compound in Kakuma.

Additionally, he called for an independent review of the U.N. Refugee Agency and Refugee Affair Secretariat's protection and safety measures for refugees, especially LGBTQ refugees at Kakuma.

"We remind both agencies and the public that this killing took place after a series of attacks and complaints had been reported by refugees," wrote Houghton in the statement, which asked Amnesty members to hold a candle in Atuhwera's honor and demand justice.

Last month's attack was the second time that Atuhwera and Ayesigye were burned in an anti-gay assault by other refugees. The first incident occurred April 13, 2020, according to gay Ugandan activist Victor Mukasa, 45, who operates from Baltimore. Mukasa is now a permanent resident of the United States, having been granted asylum in 2012. He never lived at Kakuma, but he continues advocating for LGBTQ rights in Africa from America.

LGBTQ refugee activist Wavamuno Benon posted a video on Facebook of an unidentified Sudanese man threatening to burn the LGBTQ residents of the compound days before the fire at Block 13.

Authorities have not arrested any suspects, nor have they indicated an investigation is underway, Benon wrote. UNHCR officials have not visited Block 13 following the fire, he added.

"We have managed to get pictures of them during the attacks and showed them to the security authorities. No arrests have been done," wrote Benon.

Instead, LGBTQ residents of Kakuma are blamed and discredited by UNHCR and some humanitarian organizations officials for the attacks, according to the release.

"Each time Trinidad and the broader Kakuma LGBTQ+ community pleaded for help, UNHCR consistently spun a narrative that blamed and silenced the survivors for the violence they endured," the release stated.

In response to Atuhwera's death, some Block 13 residents marched to the local UNHCR office at Kakuma to protest the lack of protection. Security forces turned them away at gunpoint and drove them back to the camp, Benon messaged to the B.A.R. April 12.

It was more peaceful than last May's demonstration when authorities used tear gas on the demonstrators.

UNHCR officials have since mandated all refugees remain in the camp.

"Operating at the core of UNHCR's narrative appears to be the belief that LGBTQ+ community members like Trinidad are disposable and not worthy of protection and care," activists stated in the release.

There have been 45 recorded attacks by other refugees against the LGBTQs at Block 13 in Camp Kakuma since March 2020, Mukasa wrote.

LGBTQI refugee activists have complained about homophobic assaults, rapes, and other attacks on the community at Kakuma since 2014. The situation got so bad a group of LGBTQ refugees escaped to Nairobi in 2018 where the UNHCR temporarily maintained a safe house. A year later the agency forced the queer refugees to return to Kakuma.

"Kakuma is a highly hostile environment for LGBTQ+ refugees," wrote Mukasa. "Homophobia and transphobia are a reality there. The attacks are real and brutal. LGBTQ+ refugees are constantly living in fear."

During his first year at the camp, Atuhwera was assaulted seven times. In addition to being burned twice, he was stabbed and stoned on multiple occasions, according to the release.

Kakuma is the largest such camp in the world with nearly 200,000 refugees and asylum seekers as of July 2020, according to UNHCR's website.

Camp Dadaab, the third largest refugee camp in the world also located in Kenya, has an estimated 218,873 refugees and asylum seekers as of July 2020, according to the agency.

Kenyan government officials gave the UNHCR 14 days to present a plan for closing the camps during an April 8 meeting, reported Kenya Citizen TV.

Benon wrote that UNHCR has been silent on the issue, but a group of LGBTQ refugee activists are working on obtaining more information.

"Yes, it is responsible for his death," Benon wrote in an interview, responding to the B.A.R.'s question on Facebook Messenger April 12.

Benon accused UNHCR of not taking action following Atuhwera's multiple complaints about homophobic attacks against him during his year at the camp. Atuhwera arrived from Uganda at Kakuma in March 2020, according to Benon and Mukasa. The business administration student fled his home country after it was discovered he was gay.

LGBTQ African activists remembered Atuhwera as a dedicated human rights defender and a gifted poet whose LGBTQ struggles were reflected in his verse, according to Monday's release. He also studied divinity, economics, history, and literature.

"Chriton is a human rights defender who has diligently provided leadership on Block 13 attempting to shield his fellow LGBTQ+ Block 13 members from harm during life threatening violent homophobic attacks on them," activists stated in the unpublished April 11 release.

According to the April 12 release, the two men were transported to Clinic 7 on March 15 before being transferred two days later by road, an "excruciating" journey for the victims, to Lodwar Hospital, which did not have a burn unit. It was only two days later the men were airlifted to the hospital in Nairobi.

"Had UNHCR responded to the calls for protection by LGBTQ+ refugees in Kakuma Refugee Camp, Chriton would be alive today," wrote Mukasa.

Benon, who escaped from Kakuma last November and is continuing his advocacy for Block 13 from an undisclosed location, claimed that UNHCR officials "abandoned" the two men after airlifting them to the Nairobi hospital.

Agency officials left the two men at the hospital with "no caretaker to look after them and not giving updates on the patients," he wrote.

UNHCR officials did not respond to the B.A.R.'s requests for comments by press time.

"The refusal of UNHCR to protect LGBTQ refugees is killing them," wrote Mukasa. "The silence of human rights organizations is giving the violence and the impunity strength."

The activists called for action by LGBTQ people and allies.

"We can't remain silent in the face of violence as that in Kakuma Refugee Camp or any group of people," wrote Mukasa, who encouraged LGBTQ people to "rise up, speak up, demand for the evacuation of LGBTQ+ refugees from Kakuma Refugee Camp.

"The lives of these refugees matter," he wrote.

Tsvetkova was charged with producing and disseminating "pornographic materials" and violating the anti-gay propaganda law for her body-positive drawings of vaginas published on Russian social network, VKontakte, according to an April 9 Amnesty International news release.

Russian courts already found the 28-year-old guilty December 11, 2019 of violating the country's anti-gay propaganda law. She was already under house arrest when she was arrested again March 16, 2020.

Tsvetkova also was fined $780 (50,000 rubles) for administrating two LGBTQ-themed communities on VKontakte. Russian authorities hit her again with $1,050 (75,000 rubles) for her drawing "Family is where love is. Support LGBT+ families," depicting two same-sex couples with children.

Her plight prompted a global outcry calling for Russian authorities to drop her case last summer.

The court has ordered her trial to be heard behind closed doors, according to Amnesty International. Tsvetkova faces up to six years in prison if found guilty.

"The Russian authorities must stop trying to hide this Kafkaesque absurdity behind closed doors, and guarantee Yulia's right to a public hearing," Natalia Zviagina, Amnesty International's Moscow office director, stated. "Stop targeting feminist, LGBTI and other activists, and guarantee artistic freedom for all."

Seyran Ates is one of the first female imams in Europe and the founder of Ibn Ruschd-Goethe mosque, Germany's first LGBTQ-friendly and gender-free Muslim places of worship.

The bisexual Turkish-German lawyer and feminist is attempting to modernize Islam by fighting for a sexual revolution within the religion, according to the documentary's March 29 news release.

Ates has been under police protection since 2006 due to being shot and receiving fatwas and death threats for her views and style of Islam.

For streaming details and to get tickets, visit https://sffilm.org/event/seyran-ates-sex-revolution-and-islam

Got international LGBTQ news tips? Call or send them to Heather Cassell at WhatsApp/Signal: 415-517-7239, Skype: heather.cassell, or oitwnews@gmail.com: