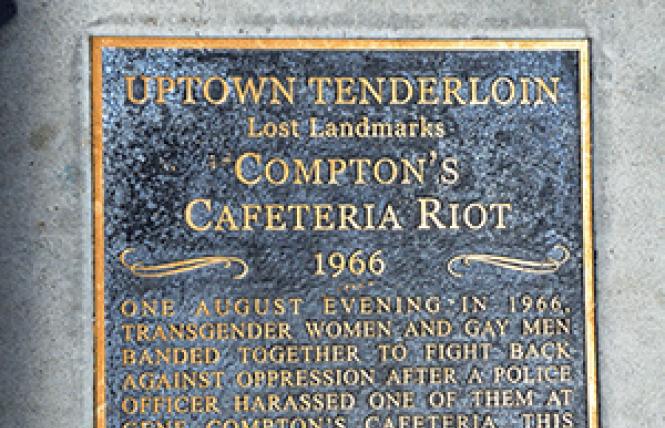 A sidewalk plaque in front of the site of Compton's Cafeteria commemorates the 1966 riot that took place there. Photo: Rick Gerharter

The final season of a podcast about the history of the LGBTQ rights movement will conclude with an episode about Stonewall that drops on June 28, the 52nd anniversary of the riots — and will precede a forthcoming podcast about late gay San Francisco supervisor Harry Britt.

The third season of "Mattachine: A Queer Serial" premiered April 12 and will feature 13 episodes, according to its creator, independent genderqueer historian Devlyn Camp.

The second season ended with an episode about Black gay activist Bayard Rustin, whose life illustrates how the Black and LGBTQ civil rights movements enriched each other even in spite of mutual antagonisms that existed at times, Camp noted.

"It was an extremely important moment for people in the gay rights movement to take cues from the civil rights movement," Camp said. "When [Rustin] reached out to Mattachine [a largely white gay rights group], he didn't hear back. So that's how we close season two."

This final season will feature events that occurred from 1963 until the Stonewall riots in 1969, an uprising against police harassment in Manhattan that began the modern phase of the movement for LGBTQ equality. Many of the events leading up to Stonewall took place in San Francisco, Camp said.

"We're going to hit some really iconic events in queer history this season: Society for Individual Rights, which led to the California Hall Raid; the first gay pickets; lots of queer battles against police brutality; the Compton's Cafeteria riot; the Imperial Court; the Mattachine sit-in in New York, as well as Selma, Watts, the 1968 [Democratic National Convention], and other cultural elements influencing gay activists from outside the movement," Camp said.

The Compton's Cafeteria Riot, which occurred in August 1966 at a long gone all-night diner in the Tenderloin and was one of the first LGBTQ uprisings in American history, occurred in response to police harassment of transgender and gender-nonconforming people.

Camp, 28, said they spent years researching the historical record to paint a complete picture of the LGBTQ activism of the pre-Stonewall era. For learning more about the Compton's Cafeteria Riot, Camp relied greatly on the work of Susan Stryker, a trans woman and a former head of the GLBT Historical Society in San Francisco who directed the 2005 film "Screaming Queens: The Riot at Compton's Cafeteria."

(Stryker, a leading academic in the field of transgender studies, is now the Barbara Lee Distinguished Chair in Women's Leadership at Mills College in Oakland.)

"I've spent the last five years going down the rabbit hole of homophile activism, digging through papers," Camp said. "My computer's hard drive is packed with so many pictures to create a massive timeline of so many stories, [now] told separately. No one was really telling the story of how these were events that were interconnected: how the Compton's Cafeteria riot tied in with SIR and the Tavern Guild."

Joey Cain, 66, a gay man and longtime San Francisco resident and independent historian, who was among those who moved Mattachine Society co-founder Harry Hay to San Francisco decades ago, recorded some of the voice parts in the podcast. Hay died in 2002.

"Devlyn and I talk about history all the time," Cain said. "I recorded one or two of the characters for them, so I performed. I think it's probably one of the best histories of the modern LGBT movement that's out there. Devlyn has really done incredible research, combines information from different sources, for new insight and understanding of what was going on."

Will Roscoe, also 66 and of San Francisco, voiced some parts in season two and joined forces with Cain to have the podcast played at the GLBT Historical Society Museum in the Castro neighborhood. Roscoe, a gay man, and Camp are beginning work on a new project together, which Camp said "will not be a queer serial season, but a separate project that maybe would be like a fourth season."

Britt project
Roscoe told the Bay Area Reporter that this project will be based on a series of audiotaped interviews he did with Britt, who succeeded Harvey Milk on the San Francisco Board of Supervisors after the latter's November 27, 1978 assassination. Britt served from 1979 to 1993.

"I'm developing [the audiotapes] into a podcast that Devlyn will produce and distribute," Roscoe said. "I'm not sure about the branding but that's the plan. I can't say anything about when this will come together."

Roscoe said he'd met Britt in the wild and heady days of the late 1970s. The two had worked together on the No on Prop 6 campaign to oppose the Briggs initiative, a proposed 1978 state ban that would have barred LGBTQs from teaching in public schools.

The pair reconnected in about 2008, Roscoe said.

"I had made a connection with him and we started having dinners together," Roscoe said. "He kept talking about wanting to do a book but, for a variety of reasons, it was clear to me he probably wasn't going to do a book. So, because he was such an exceptional figure, I talked about doing an oral history."

Roscoe and Britt began recording regularly for several weeks, Roscoe said, until the latter had collected 20 hours of recordings, which he had transcribed.

"Devlyn really inspired me with his podcast series," Roscoe said about his decision to put the tapes to historic use. "It's kind of early, but I feel like it's going to happen."

Roscoe said that while "Harvey was the theory, Harry was the practice."

"Harry Britt is the most important queer leader you've never heard of," Roscoe said. "It's tentatively titled 'Give 'em hell, Harry: The man who kept Harvey Milk's dream alive.' 'Give 'em hell, Harry' was the slogan for his 1987 campaign for Congress, when he lost by a few thousand votes to Nancy Pelosi." (Pelosi is now House speaker.)

Cain hopes people avail themselves of the podcast.