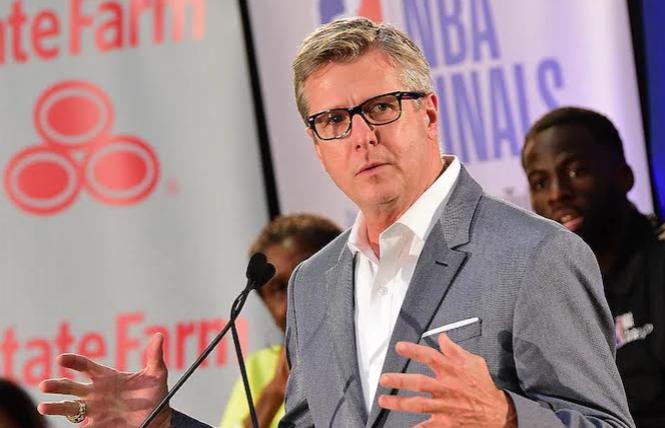 Golden State Warriors President and COO Rick Welts will leave the positions at the end of this season, staying on with the team as an adviser. Photo: NBAE/Getty Images

Rick Welts, the gay president and chief operating officer of the Golden State Warriors, will step away from the organization at the end of the 2020-21 season, he and the team announced April 8.

The team noted in a news release that Welts guided the NBA franchise to one of the most successful decades in NBA history from a business operations perspective.

Welts has been a member of the NBA for nearly five decades, including this most recent stint with the Warriors, which began in 2011, several months after he publicly came out as gay in a New York Times article while serving as president and CEO of the Phoenix Suns. He became the highest-ranking executive in men's professional sports to come out.

Welts had resigned from the Suns in early September 2011 in order to move to northern California to be closer to his partner, Todd Gage of Sacramento. Back then, he told the Bay Area Reporter that the single biggest fear he had previously about speaking out publicly about his sexuality was that he would never be able to land another job in the sport he loves. But instead of becoming a pariah, he received a call from Warriors managing partners Joe Lacob and Peter Guber, who had been retooling the Warriors since buying into the team.

Currently in his 10th season with Golden State, Welts has spent 46 seasons overall in the NBA, including roles with three teams — the Warriors, Suns, and Seattle SuperSonics (now the Oklahoma City Thunder) — and the NBA league office. He was inducted into the Naismith Memorial Basketball Hall of Fame in 2018, the crowning achievement in a career filled with numerous accolades.

Welts will remain associated with the organization as an adviser. The Warriors are expected to name a new president within the next week.

"This has been the ride of a lifetime," Welts stated. "To have had a front row seat to the growth of the NBA from where it was in the late 1960s to its place today as one of the most respected and successful leagues in sports on a global stage has been an incredible privilege. The first day I met Joe Lacob and Peter Guber, I wanted to be a part of building what I knew could be a special organization. We have the most talented staff in the industry, and we are poised for even greater success in the future. Personally, I am excited for my own next chapter.

"When Joe, Peter and I agreed on the timing of this announcement two years ago, we didn't have a pandemic on our radar screen," he added. "As it turns out, now that we can look forward to welcoming fans back safely to Chase Center, and we have a realistic hope for a return to 'business as usual' for next season, this timing feels perfect."

Lacob, co-executive chairman and CEO, recalled the day Welts was introduced to the media.

"On that day, he noted the Warriors franchise was always viewed as a sleeping giant that could be very successful if it ever got into the right hands," he stated. "Well, there were no better hands than those of Rick Welts, and his intuition proved to be spot-on as his leadership, vision, creativity and relationship-building enabled us to reach heights never seen before in the NBA on the business side. We thank him for his incredible contributions to our franchise and, more importantly, the class and character with which he represented our organization each day."

Under Welts' direction, the Warriors established several franchise benchmarks from a business standpoint, as the team's brand grew in stature following five consecutive appearances in the NBA Finals and three NBA championships (2015, 2017, 2018). The organization earned numerous accolades across all facets of the business, including being named "Franchise of the Decade" among all professional sports teams by Sports Business Journal in 2019. Additionally, the Warriors became the first professional team to win Sports Business Journal's "Sports Team of the Year" award on multiple occasions under Welts (2014 and 2016).

"Much like a movie needs a well-placed and perfectly-aligned star to make it successful, you need to find the right person to lead an organization to prominence," said Guber, the co-executive chairman of the Warriors. "Fortunately, we found that 10 years ago in Rick Welts. His hiring was one of the most important decisions Joe and I have made since purchasing the Warriors. The ability he demonstrated to navigate any situation with precision and grace—from building a new arena to dealing with a pandemic—is unparalleled. He wrote an incredible script and played the role to perfection. We will be indebted to him forever."

During this time, Welts oversaw the completion of the Warriors' state-of-the-art new arena, Chase Center, in San Francisco's Mission Bay neighborhood, which opened its doors in September 2019. A year after its opening, Chase Center was named Sports Facility of the Year by Sports Business Journal and has received numerous distinctions and industry awards.

Welts began his NBA career as a ballboy with the SuperSonics in 1969 at the age of 16 and, a decade later, was a part of the franchise's lone NBA championship in 1979 as its public relations director. During his 17 years with the NBA league office in New York (1982-99), he filled many vital roles and eventually rose to executive vice president, chief marketing officer and president of NBA Properties. Welts' notable accomplishments with the league included the creation of NBA All-Star Weekend in 1984 and the marketing program for USA Basketball's Olympic "Dream Team" in 1992. Along with Val Ackerman, he was named "Marketer of the Year" by Brandweek in 1998 for his role in launching the WNBA.

A native of Seattle, Welts was selected to deliver the commencement address to his alma mater, the University of Washington, in 2019. He owns the rare distinction of being part of championship teams in the NBA (4), WNBA (2) and the NBA G League (1). Additionally, his teams made a total of seven NBA Finals appearances. 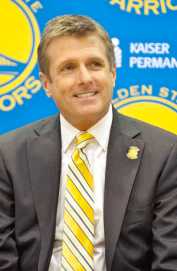