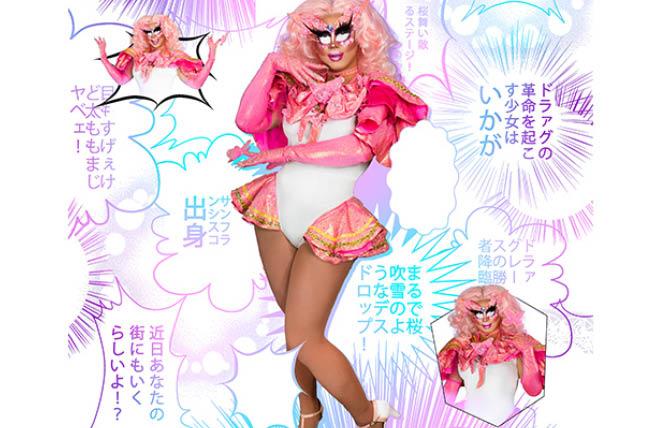 Rock M. Sakura designed and made this outfit, inspired by ChibiMoon from "Sailor Moon," in one night. It was designed and constructed to be Sakura's "RuPaul's Drag Race" entrance outfit to gain attention from her anime fan base. Photo: Cash Monet

You may know Bay Area-raised drag performer Rock M. Sakura from last year's "RuPaul's Drag Race" Season 12, from her YouTube channel with more than 55,000 subscribers, or from her pre-COVID performances at numerous drag events. She's also known for her fantastic anime-inspired make-up and outfits, many of which she designs and illustrates herself.

You might not know that sex work partly funded her "Drag Race" participation, a past she revealed in tweets just hours after news broke of the March 17 Atlanta-area spa shootings in which eight people died, including six women of Asian descent.

On this week's Out in the Bay radio show and podcast, Sakura, known as Bryan Bradford when not in drag, spoke about her time on "Drag Race;" her new video series, "Rock M. Sakura's Sexy Superhero Sickening Spectacular," and other digital content; the trials of showbiz during COVID; and the anti-Asian and anti-sex-worker violence that she reacted to in her tweets.

[Note: News reports at the time indicated that most of the women killed March 17 worked in the targeted massage parlors, but did not make clear how many, or if any, of them were actually sex workers.]

"Sex work was a way for me to supplement my income without losing time to devote to my art," said Sakura. "I truly believe I would not have gotten onto 'Drag Race' if it were not for me doing sex work." She wants laws to protect sex workers from hate crimes and for sex work to be decriminalized.

Most of our conversation was much lighter. Sakura, known for her campy performances and anime-inspired outfits and makeup, likes to clown around. While I recorded our introduction, she stuck Sharpies up her nostrils in a nearly successful attempt to crack me up.

"It feels good to hit that nerve in the back of your nose," she told me, then laughed while lamenting that she's had "so many COVID tests that it's practically unusable now."

"I love looking like a fool, and this is my opportunity to really camp it up and play a very caricaturized version of myself, like someone who should definitely be locked up."

She said it's also broadly relatable social commentary. The mockumentary follows Sakura around San Francisco as she searches for her superpower in an attempt to please her disapproving superhero parents.

"How many of you out there feel like you haven't found your superpower yet, and your parents won't shut up about it?"

Hear more and see some of Rock M. Sakura's fantastical anime-inspired outfits and makeup on this week's Out in the Bay podcast and accompanying post. The show airs 9:30 a.m. Saturday, April 10, on KSFP, 102.5 FM in SF only, and at 10 p.m. Tuesday, April 13, on KALW, 91.7 FM throughout the Bay Area. Or listen anytime from anywhere on Out in the Bay's website.

Out in the Bay: Father-daughter duo makes form-fitting bikinis for trans girls
Sign up!