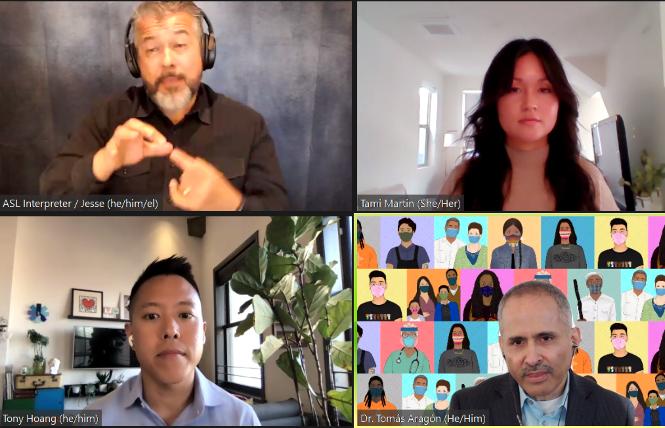 California's new public health director, Dr. Tomás J. Aragón, lower right, spoke at an Equality California vaccine town hall and encouraged everyone to get a COVID shot when it is their turn. Photo: Screengrab

At a virtual town hall touting COVID-19 vaccines to the LGBTQ community, the state public health director said he wants to improve sexual orientation and gender identity data collection for the inoculations, but did not give specifics.

"SOGI data collection is incredibly, incredibly important," said Dr. Tomás J. Aragón, state public health officer and director at the California Department of Public Health, at the April 6 meeting. "When I was in San Francisco, maybe around 2012, we were one of the first in the country to develop guidelines on how to collect this information."

Aragón had been San Francisco County's health officer from 2010 until his appointment by California Governor Gavin Newsom to his current position in the waning days of last year.

As the Bay Area Reporter previously reported, the state's public health department is not tracking vaccinations among LGBTQ Californians. There are numerous issues around SOGI data collection for people who get tested for the virus, including glitches between the state system and counties. Additionally, there are problems with national guidelines.

"Unfortunately, it's been difficult to implement for a variety of reasons, and certainly across the country, including in California, even though the law has passed we have implemented it at the state level with the testing and then when you sign up for a vaccine to get registered you'll be asked those questions," Aragón said. "However, the data is not at the quality that we want. ... We still have a long way to go in terms of the quality of the data."

However, when booking a vaccine appointment through https://myturn.ca.gov/, no sexual orientation question is asked. A gender question does give options of "female," "male," "nonbinary," and "prefer not to say."

"I've now been in the health department for four months and it's going to be one of my priorities to really improve it," he added, referring to his new position. "As director of the CDPH, I am really committed to making advancements in that area."

The B.A.R. had submitted a question to Equality California, which hosted the event, asking Aragón why the data is not being collected and what plans he has to improve SOGI data collection for COVID vaccinations.

Tami Martin, who moderated the panel, verbalized the question by asking if Aragón could touch "on why SOGI data collection is so important and how the department is collecting that information now."

"One thing we always say, as it pertains to data collection, is if we aren't counted we don't count," Hoang said. "The organization is really committed to working with state and local provider levels to really make sure that SOGI data collection continues to be important, not just for COVID-19, but for all types of programs."

Other highlights
The town hall, "COVID-19 Vaccines & the LGBTQ Community," comes just nine days before the state plans to open vaccine eligibility to all Californians over the age of 16, and the same day that Newsom set June 15 as a tentative date for ending the state's color-coded tier system of pandemic-related restrictions, while keeping a mask mandate in place.

Aragón encouraged everyone to get vaccinated when it is their turn, with whatever vaccine they are offered.

While some are concerned that the Johnson & Johnson vaccine may not be as effective as the Pfizer and Moderna varieties, Aragón sought to alleviate those fears.

Hoang said that many LGBTQ people don't trust the medical establishment, citing conversion therapy, experiences during the AIDS epidemic, and ongoing personal discrimination as reasons. But Aragón was resolute that while people with concerns should talk with their physicians, nobody should be afraid.

People who've had COVID-19 in the past should also get vaccinated, Aragón said, and in general people will have soreness in their arm after the jab. While "sometimes people will have fever, chills and feel tired with Pfizer and Moderna," the number of people who will suffer an allergic reaction is "10 in a million."

Nonetheless, "if you're vaccinated, see if you can take the next day off" in case of side effects, Aragón said.

Aragón encouraged people to treat those skeptical about the COVID vaccines with respect.

"The people hardcore about not taking vaccines is a small number of people," he said. "Most people who are hesitant are on the fence, but will [get vaccinated] with the right messaging. Never pass judgment because people are on the fence or think they're anti-vax because they don't want to be vaccinated at the moment."

However, Aragón, who said the new vaccines will also work against variants, promises a bright future to people who get vaccinated. Citing U.S. Centers for Disease Control and Prevention recommendations, he said two weeks after your final vaccination you should feel free to see other vaccinated people indoors and without physical distancing.

"Get vaccinated. And after you've passed two weeks, get together; hug each other; eat meals; go dancing; be happy," he said. "Social connections are so important for our physical and mental health."

The B.A.R. reported last month about another town hall that took place informing LGBTQ community members about the three vaccines. That event was a collaboration between the Office of Transgender Initiatives and the San Francisco Department of Public Health.

And as the B.A.R. reported online March 31, the trans office in partnership with community organizations and the city's COVID Command Center created the LGBTQ-focused multimedia vaccine campaign called "Show your Pride! Get Vaccinated." It launched that
Wednesday in conjunction with the annual observances of International Transgender Day of Visibility.

Editorial: On board with SOGI audit

SOGI info only applies to positive COVID cases
Sign up!