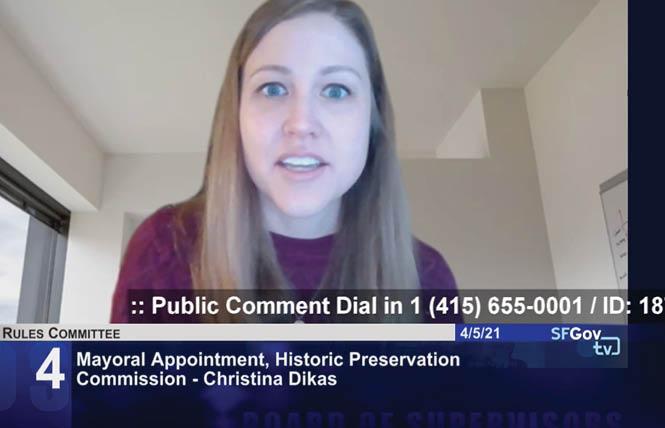 Christina Dikas spoke during the Board of Supervisors Rules Committee meeting April 5, but the panel rejected her nomination, which will go to the full board April 13. Photo: Screengrab

A San Francisco Board of Supervisors panel has rejected Mayor London Breed's fourth non-LGBTQ nominee to the city's historic preservation advisory body due to there being a lack of LGBTQ representation on it. The decision raises questions on if the nomination can survive a vote before all 11 supervisors.

The supervisors' rules committee voted 3-0 at its meeting Monday (April 5) against seating Christina Dikas, an architectural historian and cultural resources planner who works for the firm Page and Turnbull. The vote had been expected as all three committee members had told the Bay Area Reporter they would not support Dikas when her nomination was announced.

The trio continues to call on the mayor to instead name an LGBTQ person to the seat. In February, Breed did not reappoint the Historic Preservation Commission's two gay members, Jonathan Pearlman and Aaron Hyland, who had been serving as the commission's president. Pearlman's Seat 3 is to be filled by an architectural historian, and LGBTQ community leaders have encouraged Breed to name Hyland to it.

"I am excited about the opportunity to contribute to my city's legacy in the capacity as a commissioner," Dikas told the committee members.

But gay District 8 Supervisor Rafael Mandelman, the board's lone LGBTQ community member, signaled the vote to come as he explained why he was unable to support Dikas for a seat on the commission. He harkened back to one of his board predecessors, the late gay supervisor Harvey Milk.

Back in the 1970s Milk routinely called for there to be diverse leadership on city boards and commissions that included LGBTQ people in his columns in the B.A.R. and on the campaign trail. He himself was one of the first out people appointed by a mayor to a city oversight body.

While he stressed he felt Dikas was qualified for the position, Mandelman said he nevertheless could not support her and faulted the mayor's office for not nominating an LGBTQ person for the seat.

District 1 Supervisor Connie Chan concurred with her colleague in explaining why she was voting against Dikas' appointment. She agreed the city's LGBTQ community needs to be represented across all oversight panels.

"I will be regrettably not voting for Ms. Dikas today," said Chan. "I look forward to having an appointment that truly represents the LGBTQ community on the Historic Preservation Commission."

District 3 Supervisor Aaron Peskin, who chairs the rules committee, provided the third vote against Dikas. Her nomination will now go before the full Board of Supervisors at its April 13 meeting.

Several speakers at the hearing spoke out against Dikas' appointment due to her working for a company often hired by the city to conduct reviews of historical resources and properties subject to development proposals. A few callers spoke on behalf of Dikas, pointing to her experience in the field of historical preservation as making her a perfect choice for the seat.

Breed spokesman Jeff Cretan did not immediately respond to a request for comment about the rules committee vote.

The matter of the board seat comes as a number of LGBTQ historical preservation items move through the city's approval process. This week the supervisors are expected to back a project that will install historical sidewalk markers in front of current and former queer businesses and spaces throughout SOMA and advance city landmark status for a Japantown site with ties to LGBTQ history.

City landmarks are also moving through the approval process for the Noe Valley residence of the late pioneering lesbian couple Phyllis Lyon and Del Martin and the gay-owned Eagle bar in SOMA popular with the leather community. Other local LGBTQ historic sites, however, continue to languish on a city planning department list of future potential city landmarks while early talks have focused on turning Milk's former home and camera store site in the Castro into a national historic site.

In a letter the Harvey Milk LGBTQ Democratic Club's political action committee sent to the rules committee members over the weekend calling on them to reject Dikas's appointment, the queer progressive club noted because of the "important role" the HPC plays "in recognizing and memorializing our community's history, having no LGBTQ representation on this body is unacceptable."

The PAC criticized Breed's decision to name Dikas since "there are no shortage of LGBTQ historians in San Francisco with the expertise, qualification and availability to serve in this capacity." And as Milk's namesake club, the PAC noted, "It is our responsibility to call out politicians who claim to be our allies, marching alongside us in corporate sponsored Pride parades, only to deny us a seat at the table."