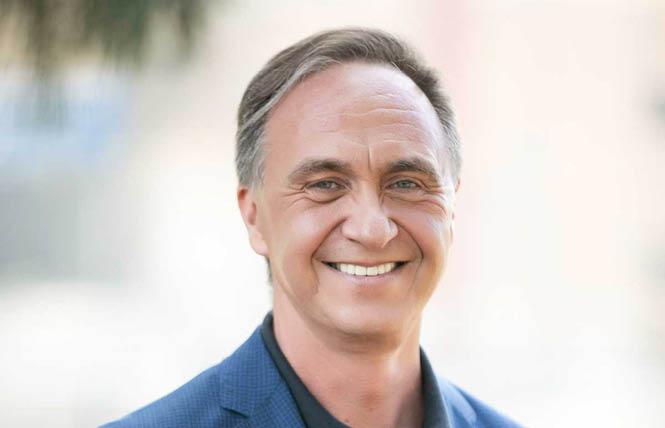 Rick Chavez Zbur, the executive director of Equality California, announced that he will run for a Southern California Assembly seat in 2022. Photo: Courtesy Zbur for Assembly campaign

With the one-year mark until California's June 2022 primary election quickly approaching, focus is already turning to which contests for state Assembly and Senate seats will draw LGBTQ candidates. The speculation was ramped up by Equality California Executive Director Rick Chavez Zbur's recent launch of his bid for an open Los Angeles County Assembly seat.

With it exceedingly rare for an incumbent member of the state Legislature to be defeated at the ballot box, most candidates wait until a seat opens up to run. Under the state's term limit rules, the winners can serve for up to 12 years and are likely to face little opposition when they seek reelection.

But it also means there is constant concern the Legislative LGBTQ Caucus for out members of the Legislature will dwindle in size as the legislative contests often draw crowded fields of candidates, pitting LGBTQ and straight allies against each other. And outside of the state's major metropolitan areas, it has been difficult for LGBTQ candidates to win their races.

Of the Statehouse affinity group's current eight out legislators, lesbian Senators Toni Atkins (D-San Diego) and Susan Talamantes Eggman (D-Stockton) will term out of office in 2024. It is expected that the race to succeed Atkins will draw an LGBTQ candidate with a serious chance of winning, but it is less certain that Eggman will be succeeded by an out senator.

While none of the LGBTQ caucus' four senators will be on next year's ballot, as gay Senators Scott Wiener (D-San Francisco) and John Laird (D-Santa Cruz) aren't up for reelection to four-year terms until 2024, the quartet of out Assembly members have all filed intentions to seek reelection to two-year terms in 2022.

He had eyed running for secretary of state in 2022, vying to become the second LGBTQ person elected to statewide office in California after gay Insurance Commissioner Ricardo Lara, who will be seeking reelection next year. But Low is unlikely to do so following the recent confirmation of former San Diego Assemblywoman Shirley Weber as the state's top elections official. The fellow Democrat has said she plans to seek a full term next year.

In Southern California lesbian Assemblywoman Sabrina Cervantes (D-Corona) has pulled papers to run again for her 60th Assembly District seat in Riverside County. Two years ago she gave birth to her and her wife's triplets.

Fellow parent gay Assemblyman Chris Ward (D-San Diego) has also already pulled papers to run for a second term in his 78th Assembly District seat. He and his husband have two small children.

East Bay seat opens
There is a possibility of seeing another incumbent out Assembly member running in 2022 depending on who wins the special election likely to be held later this year for the East Bay's 18th Assembly District. Assemblyman Rob Bonta (D-Oakland), tapped by Governor Gavin Newsom to be California's next attorney general, should be confirmed by his legislative colleagues, prompting an election to be held sometime in 2021 to serve out the remainder of his term through December 2022.

The winner will need to run for a full two-year term next year. Three out candidates have said they want to succeed Bonta. Gay San Leandro Unified School District Board of Education member James Aguilar and social justice attorney Janani Ramachandran, who is queer and lesbian, already launched their bids.

Days after Zbur was passed over by the governor for the state's top prosecutor post, he announced he would seek to succeed Assemblyman Richard Bloom (D-Santa Monica) in the 50th Assembly District that currently covers the communities of Agoura Hills, Bel Air, Beverly Hills, Brentwood, Hollywood, Malibu, Pacific Palisades, Santa Monica, Topanga, West Hollywood, and West Los Angeles. Rather than seek reelection Bloom is running to succeed lesbian Los Angeles Supervisor Sheila Kuehl, who decided not to run for a third term on the county board.

It was an electoral pivot for Zbur, who a year ago in April had announced he would be a candidate in 2022 for Los Angeles city attorney and would be stepping down as head of the statewide LGBTQ advocacy organization at the end of 2021 to focus on his campaign. But citing the death last fall of his sister Jackie due to ALS, Zbur decided he wanted to address various issues of importance to him at the state level.

"I'm running to represent the people of California's 50th Assembly District because during this unprecedentedly difficult time, our communities need bold, progressive leadership, an unyielding commitment to equality and an unbending resolve to achieve racial, gender, economic, environmental, educational and health equity and justice for all," stated Zbur in announcing his bid March 30. "I'm running to make sure someday, no one else has to go through what my sister Jackie did — to fix our broken social safety net for the most vulnerable members of our communities."

A gay man who's been at the helm of EQCA since 2014, Zbur lives in Los Angeles. He is a co-parent to his16-year-old daughter, Shireen Valerie, and twin 12-year-old sons Rayan Francisco and Rafael Nikhil.

He last ran for public office in 1996 when he sought a Southern California congressional seat. While he was subjected to homophobic attacks and didn't win the election, Zbur made history as the first openly LGBTQ+ non-incumbent to win a contested congressional primary.

So far it doesn't appear there are any other declared LGBTQ candidates for state Assembly or Senate next year. Lesbian Palm Springs resident Joy Silver does have an active campaign account for a possible bid for the 28th Senate District seat.

She twice before has sought the office, in 2018 and again in 2020 when there was a special election to fill a vacancy. It is unclear if she does intend to run again, as the winner of last year's race, Senator Melissa Melendez (R-Lake Elsinore), is term limited from seeking a full four-year term in 2022.

Silver did not respond to a request for comment about her political plans. Her campaign website has not been updated to indicate she is an active candidate for the office.

In San Francisco there could be a chance of seeing an LGBTQ person run for state Assembly next year. Assemblyman Phil Ting (D-San Francisco) is one of 14 current and former elected officials who have expressed an interest in running for state controller in 2022, according to the secretary of state's online campaign database.

Most likely have done so in order to have a place to bank their unused cash from previous campaigns. But since last year it has been speculated that Ting would run for statewide office rather than seek reelection to his Assembly seat.

Ting told the Bay Area Reporter he plans to make a decision in the next few weeks on which office he will seek in 2022.

His 19th district covers the southwestern neighborhoods of San Francisco, the cities of Daly City and Colma, and parts of South San Francisco. Should he opt to depart the Legislature, it would open up the possibility of seeing an LGBTQ Assembly member from San Francisco again. There hasn't been one since 2014, though no out person has ever been elected to Ting's seat.

All three of the city's past out Assembly members — Carole Migden, Mark Leno, and Tom Ammiano — represented the Assembly district covering the city's eastern neighborhoods, including the LGBTQ enclaves of the Castro, Tenderloin, and South of Market. Assemblyman David Chiu (D-San Francisco) currently represents the 17th Assembly District and has filed his intent to run for reelection in 2022.

UPDATED October 4, 2021 to clarify that Senator Melendez is term limited from seeking reelection in 2022.