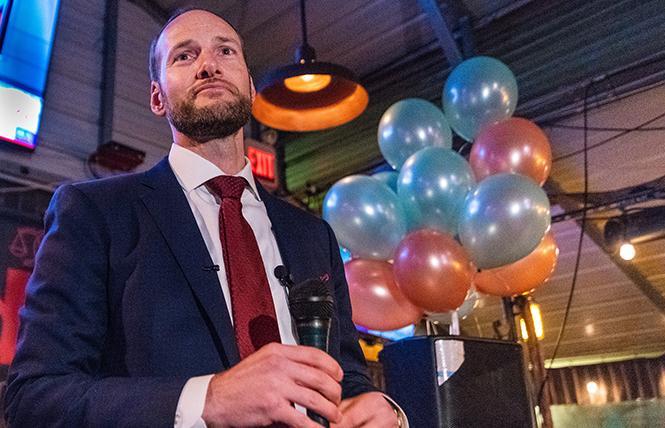 "Recently, elections were held and the voters' voices were heard. Now, just 16 months later, a minority of deep pocketed special interests want those voices silenced and their decision overturned," Leno stated in the news release. "We see this happening throughout California. Endless recalls will keep us all in a constant state of campaigns preventing our elected officials from doing their jobs. I support Chesa Boudin and the important work that he's doing. We should all oppose this recall for the unnecessary and disruptive impact it will have on our treasured democratic process."

Boudin thanked his supporters in an email to the B.A.R. March 31.

"I'm honored to have the support of community members and elected officials who reflect the rich diversity and values of this city, and understand that we cannot afford to return to policies that failed so many in the past," Boudin stated. "I have no doubt that we will beat this recall effort, and I'll continue fighting for all who live in San Francisco every day."

After this article was published, gay District 8 Supervisor Rafael Mandelman weighed in.

"I haven't signed on to the letter for no on the recall campaign because there is no recall. It hasn't qualified and I don't imagine it will," he wrote in an email. "At this point it's folks expressing support for Chesa and I think it's premature.

During the 2019 race Mandelman had endorsed Suzy Loftus, who had been named D.A. on an interim basis by Mayor London Breed just weeks prior to the election.

"My concern about the recall is it will lead everyone to retreat to their traditional political corners and we will not address the concerns people have about safety," Mandelman stated. "Right now we should focus on those."

A new group, SF Safer for All, simultaneously announced the release of a letter Wednesday, posted to Medium, opposing the recall, which was signed by 100 San Francisco residents. Among the signatories are actor Danny Glover, retired state judges Martha Goldin and Tomar Mason , and Kaylah Williams, a bisexual woman who managed Boudin's campaign and co-leads the Harvey Milk LGBTQ Democratic Club.

"From the start, Boudin has faced incredibly vicious attacks — led by the reactionary and conservative SF Police Officers Association and Republican forces — who are threatened by the change that he represents," the letter states. "Only a year into his term, they have launched a recall campaign in an attempt to remove DA Boudin from office, relying on fear-mongering and misinformation."

Tony Montoya, a gay man who is the president of the POA, denied that the association had a role in launching the recall effort, but added that the union is "fed up with Boudin."

"Contrary to the latest urban myth being peddled by the Chesa Boudin criminal apologist crowd, the San Francisco POA has neither endorsed nor engaged in the recall effort, but we certainly understand the anger and frustration of San Franciscans over Chesa Boudin's inability to keep our city safe," Montoya wrote in an email to the B.A.R. "We join the growing chorus of voices that are tired of criminals being let go only to see them rape, steal and kill later.

"We are tired of seeing criminals being treated as victims and we are fed up with Boudin blaming everyone in this city but himself for repeated public safety failures and for implementing policies that further endanger our residents," he added. "He may have been a reasonably competent public defender that helped accused criminals skate away from justice but his stint as the district attorney has made our city less safe."

The letter goes on to state that reported crime in the city is down, in spite of what it refers to as "high-profile cases being sensationalized by the media," and to blame police for not arresting enough criminals for Boudin's office to prosecute.

"We are San Franciscans who care about our communities, who want an end to racial injustice and a dehumanizing criminal justice system that cycles people in and out," the letter goes on to state. "We are San Franciscans who share Chesa's vision for criminal justice reform, victims' rights, restorative justice, an end to cash bail and so much more."

Richie Greenberg, a business adviser and activist who in 2018 was a Republican candidate for mayor, began the recall effort after a petition urging Boudin to resign received almost 15,000 signatures. When reached for comment March 31, Greenberg said that the letter from Boudin's supporters is "a joke."

Greenberg said he couldn't share exactly how many of the required 51,325 signatures to get the recall on the ballot have been collected, but said that there'd been 8,000 downloads of a mailable petition for individuals engaged in social distancing to sign. In-person signatures have been gathered in the Marina, he noted, among other neighborhoods.

"We have very large momentum forward from voters," he said.

In the coming week, Greenberg said he expects to announce that the recall effort raised between $65,000 and $70,000 more since its first financial report revealed it had raised over $75,000.

Updated 3/31/2012 with comment from the San Francisco police union.
Updated, 4/6/21: This article has been updated with comments from Supervisor Rafael Mandelman.