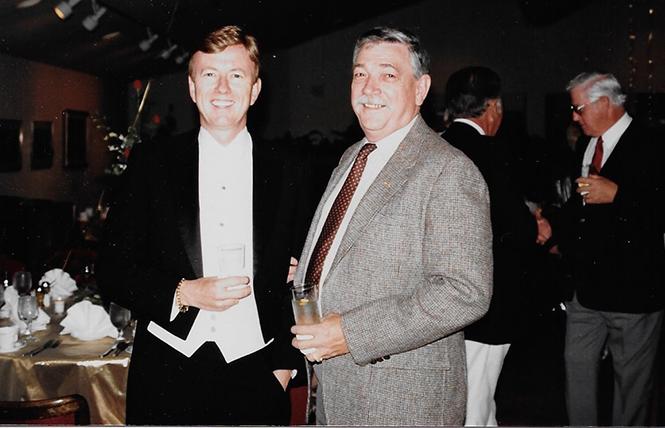 For 50 years the Bay Area Reporter has chronicled the development of the LGBT movement in San Francisco. From its nascent beginnings as the Gay Liberation Movement through its present iteration with more letters and symbols than I can keep track of, the B.A.R. has covered it. I have had a front row seat.

No discussion of the B.A.R. at 50 can be told without recognizing the significance of Bob Ross. He was a submarine sailor, cook, opera lover, community organizer, proud Emperor of the Imperial Court of San Francisco, president of the San Francisco Golden Gate Bridge Highway and Transportation District board, and friend of mayors and other powerful political and appointed figures locally and often nationally. Originally from Brooklyn, New York, Ross settled in San Francisco after serving in the navy and did what he knew how to do: run restaurants. It was the 1960s when San Francisco flourished with gay bars and supper clubs. It was a roaring '20s for gay people in San Francisco.

The gay community, although just forming, was rich and diverse. There were chic supper clubs and there were sleezy late night hangouts. There was a blossoming leather community as well as a drag scene. The gay boys didn't have any use for the lesbians and the feeling was mutual, and each stayed with their own. Ross saw this diversity as an asset as well as a problem. It was against the law to be gay, and police harassment and corruption were rampant. And we didn't even know what the various segments of our own communities were doing. We were no match against the forces that hated us all. Ross felt that each community needed to know what the others were doing. How else could we maintain a united front against the forces that would destroy us? It was that need for communication and advocacy that led him to the idea of publishing a community newsletter. It was the B.A.R.

The B.A.R. began slowly, being printed on a mimeograph machine in the back of a gay bar. But it grew quickly. Ross knew everyone from every community. He brought in Harvey Milk to write about the political scene. And there were such local luminaries as Sweet Lips (aka Richard Walters) on the bar scene, Mister Marcus (aka Marcus Hernandez) on leather and the Imperial Court, Tessi Tura on opera, and so on. At one point in the 1970s, there were 164 gay bars in San Francisco, and Lips printed a map weekly showing where they all were and what kink they appealed to. Ross loved the arts, so he brought in trained music, theater, and dance critics who had been blackballed by the mainstream media because they were gay. The B.A.R. critics were often more perspicuous than what was being dished up by the dailies.

But the B.A.R. quickly became more than a source of news and information of particular interest to our community. It became a resource. Looking through the ads, you could find and buy from LGBT and LGBT-friendly merchants. You could peruse the classifieds and find an LGBT roommate or a lover. By the time the 1980s rolled around the classified section of the B.A.R. ran longer than news and entertainment sections, often 60-80 pages. People could find like-minded people and trade with similar businesses. As Ross had wanted from the beginning, it brought the community together.

But its most important function was to inform the entire LGBT community on the matters that meant most to us and were being ignored by local, state, and national media. Police harassment of gays and gay bars in the 1970s. Assaults and street violence against transgender sex workers. And then in the 1980s, in the midst of an era of gay liberation and sexual freedom, the plague that would haunt us for decades: AIDS. If it hadn't been for the gay press and the B.A.R. in particular, it likely would have remained in the shadows indefinitely. The mainstream press didn't cover it. The president of the United States wouldn't say the word. But Ross was determined to shine the light on the epidemic and to focus public and political pressure on our elected leaders to move decisively to fund treatment for those infected and to provide the best coverage of the search for a cure. And to bring the illness out of the shadows of shame. Families and friends of those taken were offered free obituaries with photos of their loved ones. They flowed in. Some weeks, the obits went on for pages and pages. There is no question that the attention brought on by the gay press nationally and the B.A.R. in the Bay Area put necessary pressure on elected and other public figures to recognize the seriousness of this disease and move forward more decisively.

With the arrival of the internet and the ubiquitousness of social media today, information (much of it false or misleading) is readily available. But the need for serious local journalism in general, and the LGBT press in particular, is more important now than ever. For 50 years the B.A.R. has covered our joys and our pains and advocated for our interests. Fifty is an important benchmark. Let's hope for 50 more.

Thomas E. Horn served as the Bay Area Reporter's attorney for many years and was publisher of the paper following Ross' death in 2003 until 2013.