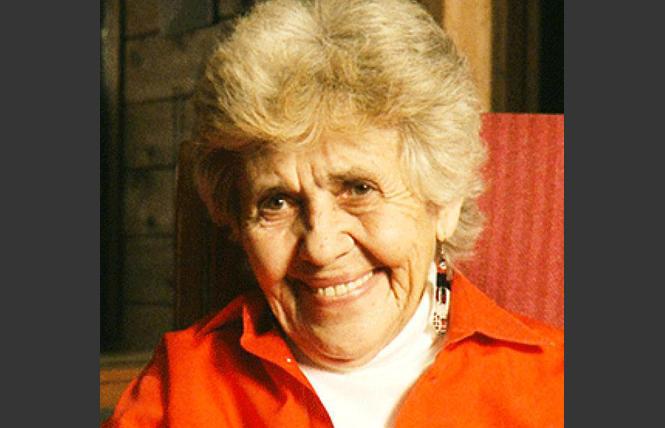 "But there are also many other stories ... if every one of them were written down, I suppose that the world itself could not contain the books that would be written." John 21:25

"Feminism has done more to save the lives of women in the last 30 years than Jesus Christ did in the last 2,000 years!" renowned lesbian feminist Sally Gearhart, Ph.D., proudly proclaimed as she opened her sermon one Sunday night in the sanctuary of Metropolitan Community Church of San Francisco, the proudly LGBTQ church in the Castro district.

It was in the middle of the hardest of the AIDS years and the church was packed for its Sunday night gospel service. The reaction was quick and strong. A congregation of over 200 predominately gay men rose to their feet and gave a spontaneous sustained ovation as Gearhart's words electrified the room. You could feel the moment these worshippers, themselves almost paralyzed by AIDS-related grief, made a life-saving connection between gay liberation and feminism. A few years later, many of these men would contribute over $10,000 to the Lyon-Martin Women's Health Clinic (now Lyon-Martin Health Services) in appreciation of the role women played during AIDS. I shared this memory recently with filmmakers Deborah Craig and Jörg Fockele, who are documenting this feminist icon's life, because it reminds me of how scenes like this are only one example of how queer spirituality changes people's lives, who in turn go on to change the world. 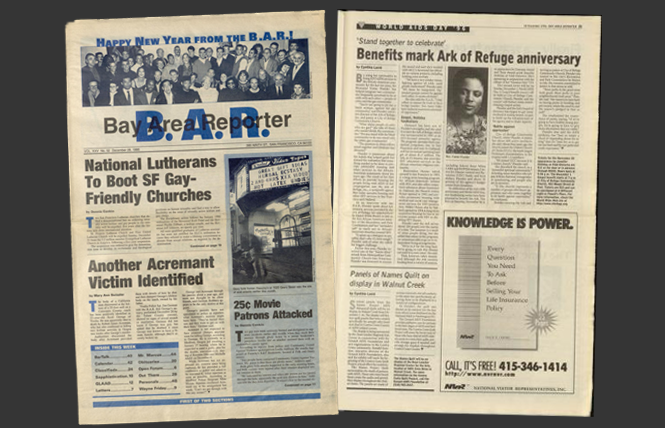 As the Bay Area Reporter turns 50, in its pages you will find many stories, many histories preserved — and one narrative sometimes overlooked. In a community where religion is viewed with suspicion, because it has been weaponized against us, queer spirituality has played a unique role in transforming religion from a role of oppression into a portal to liberation. Where else but a gay church committed to reinventing patriarchal Christianity would a lesbian separatist prophet be welcome, welcome to speak her truth from the pulpit to both challenge and comfort a community, and spur them into action — just as she had during the Briggs initiative using her rhetorical genius alongside many leaders, including MCC founder Troy Perry, when our community was under assault, fueled by the bigotry of Christian leaders like Anita Bryant and her ilk?

Future generations of scholars will find in the archives of the B.A.R. our community's Book of Chronicles to make a biblical comparison, many stories of grassroots, self-determined individuals and communities who were bold enough to queer religion and turn it from an evil function to one that is good. They'll find stories about Dolores Street Baptist Church and pastor Jim Lowder who were disfellowshipped from the Southern Baptist Church for bravely welcoming us unequivocally. They'll see the story of Dignity-SF, LGBTQ Catholics who spoke out against the pope's high-profile visit and called out his questionable human rights record, and how they were ejected from St. Boniface Church. With self-respect, they paraded to their own space, and showed the world that Catholic is who they are — not defined by a building or a prelate like the late William Levada, the former archbishop who unsuccessfully challenged San Francisco's pioneering human rights legislation in the name of his church. They'll see the witness of Most Holy Redeemer parish that throughout AIDS continues to witness from within the Catholic Church, adapting with each change of administration but continuously providing a welcome hope, as it did with its hospice during AIDS. The B.A.R. is the place that documents the existence of two self-determined Jewish communities, the independent Ahavat Shalom and still extant Congregation Sha'ar Zahav, which integrated the Reform movement in American Judaism and whose rabbis have contributed to the worldwide scholarly and liturgical life of their religion. Jews throughout the world worship differently today because of their pioneering prayer book, Siddur Sha'ar Zahav.

Even before the B.A.R.'s advent, Glide Memorial Church was San Francisco's original Cathedral of Liberation under the leadership of Janice Mirikitani and Cecil Williams. They published one of the affirming accessible first books about homosexuality, "Loving Women, Loving Men," authored by Gearhart and William Johnson, the first openly gay minister in the United Church of Christ. Glide preachers have always taught intersectional liberation even before the word was popularized, making the connection between Black liberation, women's liberation, liberation from class oppression and LGBTQ liberation, a tradition they proudly continue with pastoral leader Marvin K. White. A former Glide minister, Bishop Karen Oliveto, pastored for years at Bethany United Methodist Church in Noe Valley and is now a high-ranking official in that denomination, holding it to account for its treatment of our people, and witnessing as its first openly lesbian bishop.

The B.A.R. holds the story of struggle for acceptance of LGBTQ people in the Lutheran churches, which began here at St. Francis Lutheran Church and First United Lutheran Church, which were expelled when they defiantly ordained Reverends Jeff Johnson, Ruth Frost, and Phyllis Zillhart. Now the Evangelical Lutheran Church has repented of its action and formally welcomes LGBTQ clergy.

The story of the City of Refuge and Bishop Yvette Flunder is perhaps the city's greatest religious contribution to the spirituality of same-gender-loving people and to the world. Her rise from a Pentecostal pastored here by parents to the Love Center in Oakland, her career as gospel singer, all took a prophetic turn when she began holding services in the city and providing a spiritual home for Black, Pentecostal, LGBTQs, and their friends and families and an equally important social service organization, the Ark of Refuge. You can't tell the story of AIDS in San Francisco and not tell the story of City of Refuge.

These are just a few examples, drawn from my memory. They are meant to be representative, not comprehensive. I have left many out — but there is a place where you can go to research them — because the B.A.R. cared enough to acknowledge the role of spirituality in our collective lives. The B.A.R. at 50 tells a spiritual story too.

Glide church to celebrate the life of Janice Mirikitani Sunday
Sign up!