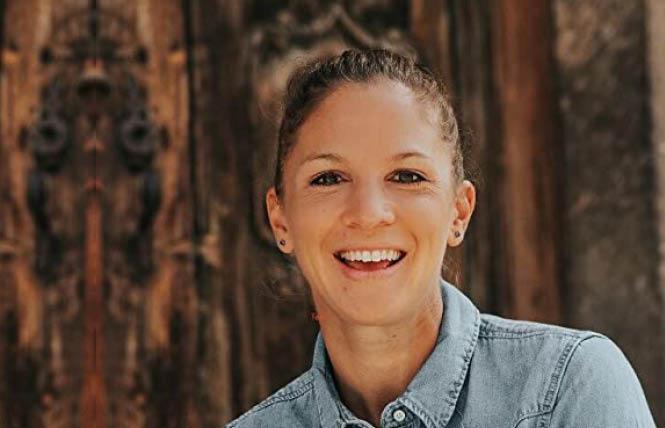 A survivor of conversion therapy is setting down her experiences in ex-gay and evangelical Christian organizations in a book slated to come out June 22.

Julie Rodgers, the author of "Outlove: A Queer Christian Survival Story," also appeared in the documentary "Pray Away," which came out last year.

Rodgers, 35, said she was first taken to conversion therapy as a teenager.

"My mom took me to conversion therapy when I came out at 16," Rodgers, a lesbian, told the Bay Area Reporter. "I was there, trying to be straight, for 10 years. At the end, I decided I am definitely gay and this is harmful."

Rodgers said she had to give an "ex-gay testimony," and after she delivered it at a banquet for donors she got the attention of the national organization.

"I was 17," she said. "I was young and charismatic. It went over well and so I gave my testimony at churches. Exodus heard me and so I became part of the Love Won Out team to tell my story.

"During that time, I started coming across people who'd been part of organizations and left, and who were deeply unwell," she continued. "Meth addictions; some were suicidal, struggling with self-harm. I didn't make the connection that this was part of a system that made me hate myself."

Eventually, even the president of Exodus International — Alan Chambers — came to see that conversion therapy was harming people. Chambers renounced conversion therapy and while Rodgers wanted to end her association with Exodus entirely, Chambers convinced her to start telling a new testimony.

"He said, 'we need someone who will tell the truth. Would you consider sticking around for a year and telling people what you've told me?'" Rodgers recounted. "I wasn't ready for that but then I realized it's an opportunity to help people understand, so I started doing that."

Rodgers received national media attention from CNN, and Exodus closed its doors a year after Chambers' change of heart.

Chambers apologized to the LGBTQ community at that time, saying "For quite some time we've been imprisoned in a worldview that's neither honoring toward our fellow human beings, nor biblical."

Conversion therapy has been widely debunked by the medical establishment. In the United States, 20 states, including California and most recently Utah, along with the District of Columbia, Puerto Rico (a territory), and more than 70 localities have passed laws protecting minors from conversion therapy, according to the National Center for Lesbian Rights' Born Perfect campaign.

But Rodgers still struggled with reconciling her sexuality with her faith. She started identifying as LGBTQ, but held to traditional proscriptions against same-sex sexual relationships.

"I came across to people with a Catholic-like position that it's OK to be gay but engaging in same-sex sex is sinful, which was more of a gateway for me," Rodgers said. "I only stayed on that path of lifelong celibacy for a couple of years, but it gave me the idea of being comfortable coming out."

During that time, Rodgers became an associate for spiritual care in the chaplain's office at Wheaton College, an evangelical school in Illinois.

Yet Rodgers received pushback, even as a celibate lesbian, for not emphasizing sin enough when she addressed LGBTQ people.

"The president, provost, and administration made steps about the college's image over prioritizing the students," Rodgers said. "I got emails that 'you're ministry is crucial but it's taking a toll on college admissions,' 'you need to be less prominent on social media,' 'why do you identify as gay?' They wanted me to say I was open to healing and marrying a man, and I said 'People feel they're a gift as they are and don't need to go to battle with their bodies.'"

One colleague even told her that "if I stand up and say 'gay people need to be celibate, I should like a bigot, as a straight, white man. It needs to come from you,'" she recalled.

Wheaton College officials did not respond to a request for comment.

In 2015, subsequent to a blog post coming out in favor of marriage equality, Rodgers resigned.

She said she has since been focusing on her book, recounting the intersection of the evangelical and LGBTQ communities.

Rodgers said that the conservative Christian exegesis leading to the denunciation of homosexuality as a sin is at odds with the attitude of Jesus Christ himself as portrayed in the Gospels.

"Theologically, it's problematic, because if you look at how Jesus lived, he was always moving toward people pushed to the margins of society — women, the poor, the sick. We have every reason to believe he'd be inclusive of LGBTQ people if he were here today; that he'd be moving toward the young trans dude, embracing him, and having harsh words for some of the people who cast us out," she said. "St. Paul does say that same-sex sex is sinful, but in the same book [1 Corinthians], he says women should be silent and wear head-coverings in church. The church moves on issues.

"If a view is causing harm to queer people, self-harm, we should probably re-evaluate that view," she added. "We can't selectively shut down."

Tim Schraeder, a gay man who had been to conversion therapy with Rodgers at Living Hope, said he left shortly before she did and was surprised to run into her in Chicago.

"I was in conversion therapy for years and ended up in the same place Julie did," he said. "We lost touch. I dropped out, a little bit ahead of her, and we were both actually living in Chicago when she started speaking out against it. I was in downtown Chicago and I ran into her at a restaurant and she had a scared look on her face, but then we were excited because when you go through conversion therapy together, it's like you've been through the war together."

Schraeder said they eventually pieced together that Rodgers was on her first date with her now-wife, Amanda, during that dinner.

"I'm really excited she is telling her story and sharing it," Schraeder said. "In a lot of people's minds, conversion therapy isn't happening anymore, but it is, and there are not a lot of books out there for people like Julie and myself who were there for multiple years."