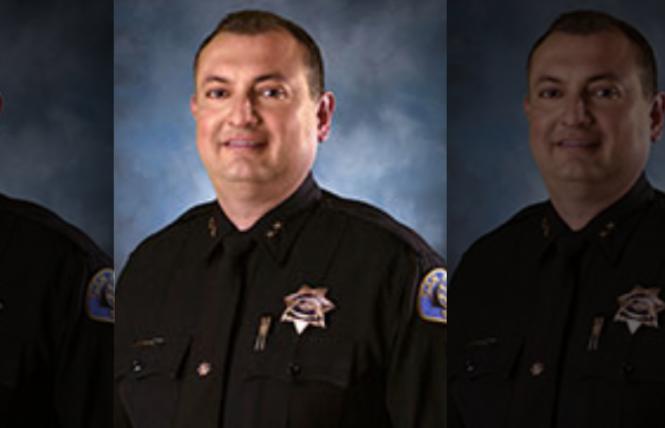 The new San Jose police chief started his job under what one county official called "a looming shadow of doubt" about his acceptance of transgender people.

Anthony Mata, a deputy police chief who has been with the San Jose Police Department for 25 years, was selected as the city's top cop March 16. He started in the position March 22.

As KGO-TV reported, in the days before Mata's appointment was announced, Julie Callahan — a trans woman who had served as an SJPD officer for almost 30 years — wrote City Manager David Sykes about why Mata would be a bad choice.

Callahan, who founded the Transgender Community of Police and Sheriffs, declined to share the letter with the Bay Area Reporter. She has retired from SJPD.

"I did not release the letter," she stated March 16. "It was sent to the city manager and was not meant for public distribution."

"The city manager and City Council have made their decision," Callahan stated in a separate email. "I will have no further comment on the matter at this time."

"He didn't agree with what I was doing, which was transitioning, as against his personal beliefs," she added. "I had sat down with about 1,100 people and he was probably one of a handful that expressed that to my face."

As the B.A.R. previously reported, the police chief position was vacant when acting Chief David Tindall promulgated a training bulletin with updated procedures for interactions with LGBTQ people — procedures that were created in consultation with LGBTQ advocates, who likewise praised them.

As part of that reporting, the B.A.R. spoke with Officer James Gonzales, a gay man who is the LGBTQ+ community liaison for the SJPD. When the B.A.R. contacted Gonzales for this report, a police spokesperson sent a statement from Mata.

"I strongly deny any wrongdoing and want to emphasize that the claims are untrue," Mata stated. "I am a firm believer that diversity in a workforce including sexual orientation, religion, race, gender, and more is essential to good policing. Policing is most successful when it reflects the community. I have and will continue to champion a diverse police department."

In a statement, Sykes said that the city looked into Callahan's concerns but found no violation of city policies.

"The City of San Jose takes all alleged violations of city policy, including alleged violations of the city's discrimination and harassment policy, very seriously," Sykes stated. "Upon receipt of various concerns regarding Chief Mata, including matters pertaining to the LGBTQ+ community, which were raised late in the recruitment process, the city immediately looked into those concerns.

"Based on the information we were able to gather, the city did not substantiate a violation of city policy nor find any reason to disqualify Chief Mata from further consideration as the city's next Chief of Police," Sykes added.

In a March 17 joint statement, gay Assemblyman Even Low (D-Campbell) and bisexual Assemblyman Alex Lee (D-San Jose), wrote that the allegations of transphobia, coupled with Islamophobia, "suggest he is unfit to lead the police department of California's third largest city and the 10th largest city in the nation."

In 1999, according to their statement, Mata was one of two officers to open fire during the fatal police shooting of Odest Mitchell, an unarmed 48-year-old man. Press reports stated Mata fired 10 shots during a foot chase, hitting Mitchell four times. The officers claimed they saw a shiny object in Mitchell's hand, but an investigation by the Monterey County District Attorney's office found that he was holding a pair of sunglasses.

"In response to the shooting, Mata told the Mercury News he 'paid it forward' by training other officers," Low and Lee stated. "This response to killing an unarmed man is unacceptable and ignores the national reckoning that has been taking place over policing in the United States."

In 2018, a lawsuit claimed Mata presided over a police briefing in which Islamophobic comments were made to harass a Palestinian officer.

"Mata told the mercury News the situation taught him to be 'more careful in engaging with our workforce,'" Low and Lee stated. "This statement suggests once again a lack of leadership and responsibility on Mata's part. Leaders should speak out if they see or hear something racist."

"Over the past couple years, staff from the Office of LGBTQ Affairs has participated in the San Jose Police Department's LGBTQ Advisory committee, and SJPD has taken significant action in repairing the relationship with the LGBTQ community," Martínez stated. "With the recent appointment of their new police chief and the criticism of him over bias allegations involving anti-transgender comments, it is unfortunate that there is a looming shadow of doubt that such inroads will continue.

"Retired officer Julie Callahan has a long history of providing excellent service to our community, and we believe her account of the facts," she continued. "Our office will continue to advocate for LGBTQ inclusion at all levels and will move forward with policy in support of this goal."

Mata, originally from Chicago, moved to San Jose to join the department in 1996.

"It is the greatest honor of my professional career to lead this great department at this time of needed social and organizational change," he stated in a news release. "I humbly but enthusiastically approach the challenge of guiding and supporting our dedicated workforce while also advocating for our community as we re-imagine community safety together."

San Jose Mayor Sam Liccardo stated that Mata was one of "many excellent candidates."

"Chief Mata's extensive experience, genuine passion for public service, and his dedication to SJPD will serve him and our city well in his new leadership role," Liccardo stated. "I look forward to working with Chief Mata to reimagine policing, reduce criminal activity in our neighborhoods, and build critical bridges between our officers and the community they serve."

Updated, 3/29/21: This article has been updated to include a joint statement from Assemblymen Evan Low (D-Campbell) and Alex Lee (D-San Jose).