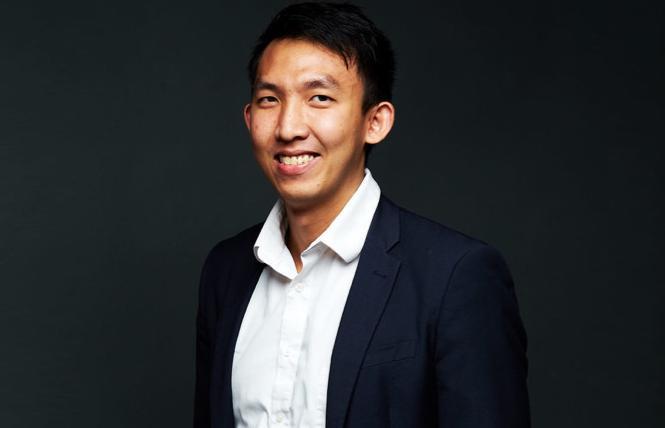 Hans How is now a member of the city's Housing Stability Fund Oversight Board. Photo: Courtesy Hans How

The San Francisco Board of Supervisors has seated a gay Malaysian-Chinese asylee to a city oversight committee. Hans How is the first LGBTQ immigrant who has yet to become a U.S. citizen to serve on a local advisory body.

The supervisors voted unanimously 11-0 at their March 23 meeting to seat How, along with Bernita Burge, Jon Jacobo, and John Baranski, on the Housing Stability Fund Oversight Board. Their terms end December 13, 2022.

The supervisors also seated Davida Sotelo Escobedo, a Chicanx trans nonbinary Oakland resident who grew up in the city, to the fund's oversight body. Their term ends December 13, 2024.

The board approved Remhai Menelik, Gen Fujioka, Fernando Marti, Shanti Singh, and Alex Lantsberg to serve on the oversight body in terms that also end December 13, 2024.

How is the second non-citizen to be approved for membership on one of the city's public oversight panels in recent weeks. Earlier this month Sarah Souza, a DACA recipient from Brazil, won approval to serve on the city's Immigrant Rights Commission.

Souza and How were both instrumental in the successful campaign last fall to pass Proposition C, the Aspiring Citizens' Charter Amendment, on the November ballot. It brought city policy in line with a change in state law instituted in 2019 that allowed non-citizens to be appointed to statewide oversight and advisory bodies.

The Housing Stability Fund Oversight Board is also the result of the passage of two city ballot measures adopted in November championed by District 5 Supervisor Dean Preston. Proposition K authorized 10,000 additional units of permanent affordable housing in San Francisco and also allowed for the creation of municipal social housing, a form of affordable housing for the public good, charging low rents and housing a broad range of incomes.

And a portion of Prop I is being used to pay for such housing. It established a higher tax on the sale of property valued at $10 million or more in the city.

The fund oversight body will make recommendations and provide guidance for the use of the city's Housing Stability Program Fund for social housing developments. The money is overseen by the Mayor's Office of Housing and Community Development and used for such purposes as acquiring land, constructing or rehabbing housing developments, and issuing loans and grants. The city office gets to appoint one person to the 11-member oversight board.

How applied for asylum in the U.S. after facing persecution in Malaysia, a country that carries a possible jail sentence of up to 20 years for LGBTQ citizens. How, who has lived in San Francisco for four years, became an asylee in December, having won his case right before Christmas.

He is a volunteer vice president of AsylumConnect, a tech nonprofit that created a website and mobile app for LGBTQ+ asylum seekers. How has also worked on affordable housing issues in various capacities since 2017, most recently as an impact investment associate with New Island Capital Management.

At the March 15 hearing of the supervisors' rules committee, which recommended which applicants to seat to the fund oversight board, How pledged to use an equity lens as a member of the advisory body. He noted he brings to the board his lived experience growing up in public housing and, when he arrived in San Francisco, living in a Chinatown single-room-occupancy hotel.

As campaign coordinator at Jobs with Justice San Francisco, Escobedo focuses on the housing needs of union members and other workers in the city. Thus, much of the work they do overlaps with the oversight body's purview, prompting Escobedo to apply to become one of its inaugural members.

"I fight for workers' ability to stay housed in San Francisco. This board seems like an opportunity to build out social housing that really works for all San Franciscans and all workers in the city," said Escobedo, who in 2018 was a San Francisco Planning Department housing affordability intern.

They told the Bay Area Reporter they are interested in moving back into the city at some point. But for now, due to the COVID pandemic, plan to remain in Oakland.

"We shall see how the year shakes out," said Escobedo.

The supervisors also voted Tuesday to allocate slightly more than $10 million in property tax revenue, the first to be allocated from the money generated by Prop I, for the acquisition, creation, and operation of affordable, social housing under the Housing Stability Fund. A similar amount was allocated toward the city's Rent Resolution and Relief Fund to assist renters and small property owners who have accumulated COVID-related debt.

"This is housing justice in action," stated Preston. "San Franciscans overwhelmingly voted to demand more from the wealthiest real estate investors, and today the board fulfilled the voters mandate by directing this money to help tenants and small property owners struggling with back rent, and to fund permanently affordable housing."

Web Extra: For more queer political news, be sure to check http://www.ebar.com Monday mornings for Political Notes, the notebook's online companion. This week's column reported on the renovation of an AIDS monument in Los Angeles and a call for names of those lost to the epidemic to add to it.

San Francisco opens up city commissions to immigrants
Sign up!