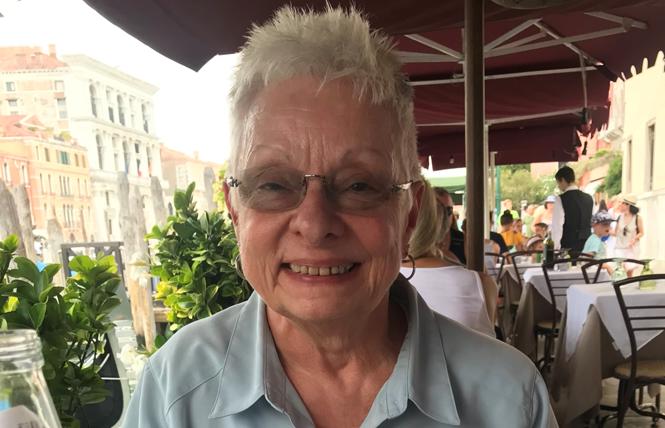 October 29, 1950 — March 16, 2021
Friends are mourning the loss of Sally McDonnell, the first woman president of Folsom Street Events and a pillar in the San Francisco community. Sally passed away on March 16 after a short battle with leiomyosarcoma. She was 70.

Born in Chicago, Sally lived for many years in Michigan before settling in San Francisco.

Sally had a distinguished 28-year career with the Federal Reserve Bank, as a national information security technology manager. She retired in 2016.

Volunteering for various organizations was very important to Sally throughout her life. Sally began volunteering for South of Market Merchants' and Individuals' Lifestyle Events, which was the predecessor to Folsom Street Events. Sally became the first woman president of the all-volunteer Folsom Street Events board in the early 2000s, where she continued to serve in that capacity until February 2005. FSE produces the large events Folsom Street Fair and Up Your Alley, which raise hundreds of thousands of dollars for San Francisco-based HIV and LGBTQ-related charities each year.

In addition to FSE, Sally spent considerable time volunteering for several public safety organizations, including the California Highway Patrol, the San Francisco Police Auxiliary Law Enforcement Response Team Program, and the International Police Association. She was also a volunteer for her neighborhood response team (SF NERT), which is the San Francisco volunteer earthquake response program. Finally, she worked with AlertSF, which is the text, email, and phone-based emergency notification system for San Francisco residents and visitors. Her contributions to these organizations will be missed.

After her retirement, Sally spent time enjoying the fruits of many years of labor by traveling extensively, often touring with the International Police Association. She enjoyed visiting many ports of call all over the world, but particularly loved the north coast of California. She loved good food, wine, and engaging conversation about politics, social justice, and all things San Francisco.

Donations can be made in Sally's name to either the Monterey Bay Aquarium or the Women's Building in San Francisco.

May the road rise to meet you. May the wind be always at your back. May the sun shine warmth upon your face. The rains fall soft upon your fields. Until we meet again.