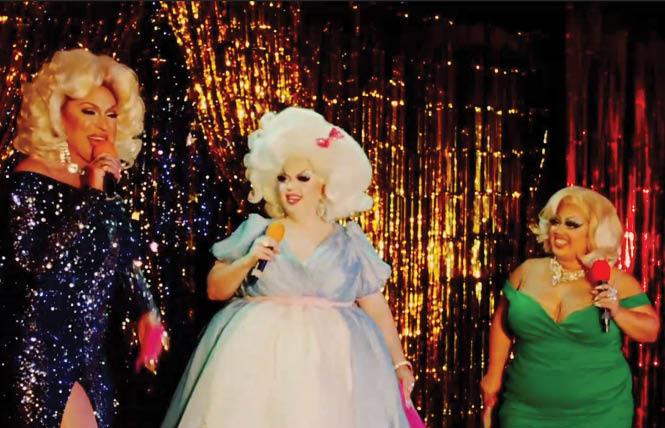 District 6 Supervisor Matt Haney's office announced March 18 that $3 million will be set aside for the Music and Entertainment Venue Recovery Fund — double the initial commitment of $1.5 million.

"As chair of the Budget and Appropriations Committee, I am proud to be allocating $3 million of our city's surplus to the venue fund," Haney stated in a news release. "Our nightlife and entertainment venues are an important cornerstone of our city's economy, and a vital part of our history and culture. Our venues need this money, they need it now, and we need our venues."

As the Bay Area Reporter previously reported, Haney authored legislation establishing the fund, which was approved by the San Francisco Board of Supervisors February 23.

Haney represents the Tenderloin and the South of Market neighborhood, home to the Leather & LGBTQ Cultural District. Robert Goldfarb, a gay man who is the president of the cultural district's board of directors, stated to the B.A.R. that the district is "delighted."

"The money is vital to the survival of venues in San Francisco and in our district," Goldfarb stated. "Our unique nightlife and entertainment venues are a cornerstone to our city, keeping them open preserves not only the locations, but the jobs they provide as well as the creative outlets for the performers and entertainers that help make this a wonderful place to live, work and play.

"The increase helps ensure that more places will be there when it is safe for us all to gather in public again," he continued.

Haney introduced the fund late last year after lobbying from entertainment venue owners, including some members of the Stud Collective that used to run the now-shuttered space at 399 Ninth Street.

"With Supervisor Haney leading the charge to create the SF Venue Recovery Fund, and Mayor [London] Breed and Supervisor Haney's commitment of $3 million into the fund, we're hopeful we might actually make it through to the other side of the pandemic," Rob Ready, the co-owner and artistic director of the Tenderloin's PianoFight stated in the release. "It's heartening to see city officials recognizing the importance of these cultural institutions and backing them up with much needed direct financial relief."

D'Arcy Drollinger, owner of the Oasis nightclub, expressed hope and thanks for the fund. He had told the B.A.R. last month he wished the fund was larger.

The telethon surpassed its goal of raising $100,000 to keep the doors open at the SOMA drag establishment, which had been threatened with permanent closure.

Drollinger stated he is "very happy with this news" of the additional city money.

"The additional funding feels like a real win for nightlife and that our efforts lobbying for more funding paid off," he wrote in an email to the B.A.R. March 19. "While three million is double what was originally allocated, and is a welcome relief, it still is nowhere near enough. Forty-plus venues have been closed for over a year now. Just existing for the year is probably close to a cumulative $20 million, not to mention the months to come. As well as the costs of getting going again.

"The ramifications of this shutdown will be affecting entertainment venues for at least another year once we're open," he added.

Drollinger stated that Oasis could use more support.

"Oasis had an amazing fundraiser," he wrote of the recent telethon. "It was a real testament to what the community can accomplish if we come together. That money will be primarily used for paying off debt and securing rent for a few months to come. But we definitely need more aid and will welcome it. All the funds are going directly back into the business and to my staff.

"Bottom line is that this fund and the additional money that has been allocated is extremely helpful, both monetarily and emotionally," he added. "It feels like finally the city is saying, 'We see you. And we're here to help.'"

Honey Mahogany, a queer, nonbinary trans person who is a legislative aide to Haney and a member of the Stud Collective, has not responded to a request for comment about whether the fund has begun to provide relief to businesses. Mahogany had told the B.A.R. last month that Haney's office hoped funds would start being disbursed in March.

The priorities of the Small Business Recovery Act are to reduce bureaucracy in permitting, increase flexibility for small businesses, and support the city's arts and culture.

"The legislation removes the limitation on the number of one-time-event entertainment permits that can happen at a location each year," a news release from the mayor's office states. "Additionally, the legislation provides a clear pathway for long established nighttime entertainment uses to receive clarity on land use authorization and further simplifies the requirements for a conditional use permit."

"The streamlined process that we created with Proposition H is helping small business owners throughout San Francisco, from adding a second restaurant location and transitioning from a retail establishment to a restaurant, to opening a new storefront," Breed stated. "With this legislation, we're expanding that simplified process to even more neighborhoods and making it even easier to start or operate a business in San Francisco. Especially as we look to recover from the devastating impacts of the pandemic, it's critical that we make it as easy as possible for small businesses to open or adapt, so that they can make it through and we can come out of this pandemic even stronger than before."

Just last week, Breed visited the Castro neighborhood with two city supervisors to announce another piece of legislation, which would make permanent the Shared Spaces program being used by small businesses, such as bars and restaurants, for outdoor service. Breed also framed that initiative in terms of cutting bureaucracy and red tape.