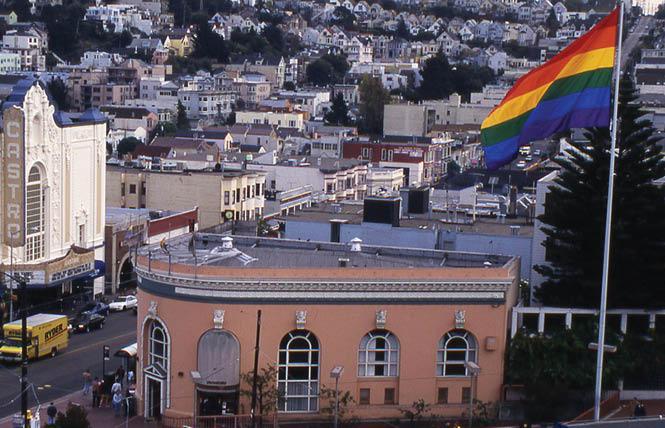 The GLBTQ+ Asian Pacific Islander Alliance will host a solidarity march and rally in the Castro Sunday following the spate of violence against Asians and Pacific Islanders in the Bay Area and this week's shootings in the Atlanta area that left six Asian women dead.

The rally will take place March 21 at 11 a.m. at Harvey Milk Plaza at Castro and Market streets.

"We mourn the vicious and cold-blooded murders of eight people in Georgia, six Asian women and two others, whose lives ended because of white supremacy," GAPA stated in a news release. "We will hold space to raise our voices against this tragedy as well as the ongoing senseless violence against our Asian community in the San Francisco Bay Area."

"I have learned a lot from the LGBTQ+ community — when to speak up and get loud in the face of injustice and the power of coalition building to create real change," he stated. "The Asian community is suffering and has been targeted based on lies and misinformation as well as plain old hate and racism. We need to support and protect our most vulnerable in the community."

The Atlanta-area shootings March 16 have galvanized Asian Americans and their allies across the country, and they are condemning the violence. According to authorities, the suspect in that case, Robert Aaron Long, 21, was arrested after he allegedly shot up three Asian spas. While officers are not labeling the shootings a hate crime, many others on social media and elsewhere say that's exactly what it was. Investigators have stated that Long said he had a sex addiction and indicated the spas were "temptations."

AAPI elected officials in the Bay Area pushed back on that narrative in their own statement March 18.

"We're already hearing excuses that the gunman was 'having a bad day' and the attacks were 'not racially motivated,'" said the statement from San Francisco Supervisor Connie Chan (District 1), queer BART board member Janice Li, City College of San Francisco Trustee Aliya Chisti, and San Francisco Board of Education Commissioner Jenny Lam. "But we know these shootings are rooted in white supremacy, anti-Asian rhetoric, and misogyny. The deep racial inequities that currently exist in our institutions are not coincidental."

They also pointed out that in a national report, Stop AAPI Hate identified nearly 4,000 reports of anti-Asian hate incidents in the last year, a 1,900% increase since the beginning of the pandemic. Last year, former President Donald Trump repeatedly used racist phrases such as "kung flu" to describe the coronavirus and was accused of fanning anti-Asian sentiment.

In recent weeks, there has been a spate of attacks on Asian Americans in the Bay Area, many of whom are elderly. Incidents took place in Oakland's Chinatown and west side neighborhoods in San Francisco, among other locations.

The San Mateo County Pride Center released its statement on the violence.

"As an LGBTQ community, we are no stranger to violence," it read in part. "Our movement has traces of opposition to violence woven into it. Across gender identity and sexual orientation are all human identities, whether it be about race, ethnicity, language, ability, body size, etc. The event that occurred on Tuesday in Atlanta wasn't just an attack on the six Asian women that were murdered, it was a display of hatred, misogyny, and violence against Asian Americans and Pacific Islanders. This act of violence is one of many due to white supremacy that we have seen nationally and locally."

"Anti-Asian violence, like any violence based on prejudice, bias, or fear of the other, is reprehensible," she stated. "Because of who I am as an Asian Filipina, because of my parents, my aunties, friends, and connected communities of color, these attacks feel more personal.

"We can and must do better. We deepen our understanding by advancing diversity and respecting our differences. In respecting our differences, we strengthen our social contract. In strengthening our social contract, we abide by the rule of law," Cantil-Sakauye added. "As we pass and approach many anniversaries relating to the pandemic, it is disheartening that while we have made progress on the virus, the disease of racism remains."

On Monday, March 22, gay state Senator Scott Wiener (D-San Francisco) and Assemblymen David Chiu and Phil Ting (D-San Francisco) will hold a news conference in Chinatown to support the Chinese and AAPI community in San Francisco and across the country. According to a news release, they will respond to and condemn recent hate crimes against members of the AAPI community, including the killings in Georgia.

They will be joined by District 3 Supervisor Aaron Peskin, who represents Chinatown; Anni Chung, president and CEO of Self-Help for the Elderly; and Rudy Corpuz of United Playaz