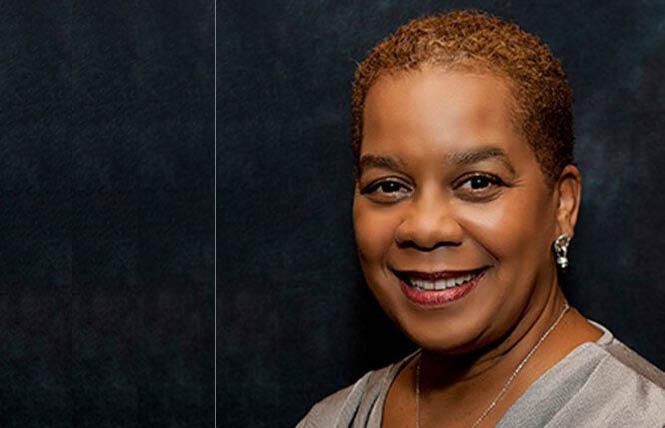 Among those voting 5-0 in support of Riddle March 17 were lesbian state Senate President pro Tempore Toni Atkins (D-San Diego), who chairs the committee, and gay Senator John Laird (D-Santa Cruz). Riddle has been serving on the Board of Juvenile Hearings since being named to it by Governor Gavin Newsom in October 2019.

The position, for which Riddle earns $159,068 a year, requires confirmation by the state Senate. Due to the COVID pandemic, Riddle's confirmation hearing had to be delayed until this month.

As the Bay Area Reporter noted in a story posted to its website March 12, a number of LGBTQ leaders in Southern California had questioned the former Pasadena police officer's ability to adjudicate cases that come before her. They had called on Newsom to rescind his nomination of Riddle to the oversight body, but his office had told the B.A.R. he was standing by his appointee.

Her detractors pointed to concerns about Riddle that were first raised in 2015 when she sought a state Senate seat. The questions then focused on her ties to several anti-gay Christian universities and her stance on abortion.

More recently questions have been raised about Riddle's nearly 29 years working for the Pasadena Police Department, where she was the first African American female sergeant, lieutenant, and adjutant to the chief of police. Chief among the criticisms was the role she played as the department's spokesperson in publicly defending two officers who shot and killed Kendrec McDade, an unarmed 19-year-old Black college student, on March 24, 2012.

Reached last week by the B.A.R. Riddle had declined an interview request and directed all questions about her appointment to the governor's office. But during her confirmation hearing, several of the senators directly asked Riddle about both of the charges leveled against her.

In response to a question from Atkins on if she had encountered LGBTQ people while serving on the parole board, Riddle disclosed that her goddaughter had come out to her about being in a relationship with a woman. She had been upset because her father had rejected her due to the news and was afraid Riddle would similarly react.

"It broke my heart. She is one of the sweetest young women you could ever want to meet. I love her," said Riddle, who choked up retelling the story. "She said, 'Are you going to abandon me?' Right here in my family room. 'You going to abandon me too?' How do we do that to people we say we love? No, I don't subscribe to that."

Newly elected Senator Sydney Kamlager (D-Los Angeles) pointed out that Congressman Adam Schiff (D-Los Angeles) was among those who had written a letter in support of Riddle. Noting that he is a strong ally of the LGBTQ community, Kamlager asked Riddle about her associations with Biola University, where she was asked to teach about criminal justice issues to students interested in a public safety career.

Riddle responded that she was "shocked" to see her painted as being anti-LGBTQ in news articles during her Senate race because of accepting the job at Biola. The school had never had an African American woman teach the courses before, so she was excited to represent a different face of law enforcement to the students, explained Riddle.

"I was taken aback when criticized for it," said Riddle, noting that her Christian faith is grounded in the Bible's "300-plus words of love" and instruction "not to judge other people."

In response to a question from Laird, Riddle said she did not answer the questions on her employment form with the Christian college that had to do with her positions on abortion and same-sex marriage. She said she had told her university employers they were not germane to her teaching about criminal justice so she was leaving them blank.

And in response to his question regarding the police shooting of the unarmed youth, Riddle explained that nothing she said about the incident in the press was of her own opinion. She was doing her job, she explained, and reciting the official views of her police chief and the department.

Stood by former police partner
Laird had also asked Riddle to talk about an incident she faced in the 1990s when her partner on the police force, a gay man, disclosed at work that he was HIV-positive. A superior told Riddle she could request to be transferred to work with another officer, but she declined the offer.

"I was taken aback because I just didn't understand how I would abandon someone not only my friend and colleague but in a tough time in his life," said Riddle. "Eddie, my husband, and I talked about it. I made up my mind there was nothing to make me abandon him. Some people shunned us."

She also recounted meeting her police partner's spouse and his family at the hospital. They initially were unsupportive of the men's relationship, she said, but eventually came around.

"They all came to understand just what I did ... is that commitment and love does not have any boundaries on same sex, or you know, hetero sex. It is about loving someone," said Riddle, who joined the hearing virtually and whose husband sat by her side.

"I am grateful they allowed me to share in that very, very rough time. No one should have to go through that," said Riddle. "I saw a strapping, strong 100% police officer go down to skin and bones. It was tough."

Riddle described how her own personal story is often reflected in the lives of the juveniles that come before the parole board. After her parents divorced, Riddle's mother raised her and her two sisters while often working two jobs to make ends meet.

"People always want to think less of you because of how you look or the background you come from. They don't take into consideration you can achieve anything," she said.

The five senators all said they were impressed by Riddle's candor in answering their questions and being so open about the struggles she has faced in her life. Senator Shannon Grove (R-Bakersfield) noted she too was raised by a single mother who was one of the first women to work at their local 911 call center.

"Your story is inspiring," said Grove, adding that she felt Riddle's career had led her to this "legacy position to invest in this next generation to make sure they have every opportunity to be productive in society."

Kamlager told Riddle how important it is to have someone who was initially dismissed as an "affirmative action hire" when she joined the Pasadena police force to now be overseeing the state's Department of Juvenile Justice.

"It got me to thinking the juveniles in this system are also disregarded, disrespected, and treated with disdain. The expectation is they are failures and not going to succeed so we shouldn't fund restorative justice efforts into them because they are not worthy," said Kamlager. "I was struck by the similarities between your story and the story of these young folks ... that perspective is really important and we need to have as a commissioner over DJJ."

Noting that the confirmation process is often difficult, Laird told Riddle he appreciated her answering his questions even if she "might not think it is fair." He said he was satisfied she had addressed all of the concerns that had been raised about her past.

"When issues are raised, we have to ask them and get to the bottom of it. And I think we just did," said Laird. "I thank you for your comments and willingness to serve."

No one called into the hearing to speak against Riddle's confirmation. But in an email sent to the committee members Wednesday, East Area Progressive Democrats Communications Chair Mary Fischer reiterated the concerns the LA-based political group had raised in letters it had sent earlier about Riddle.

"We believe there are better candidates for this board that serves vulnerable youth and ALL Californians' interest in equity and safety for the youngest members of society and their engagement with the criminal justice system. We OPPOSE this nomination," wrote Fischer. "Please be in touch with us if you are interested in our recommendations for future appointments to this panel."