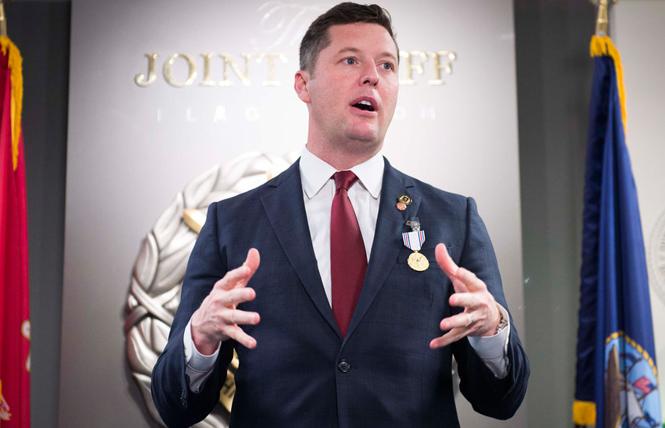 LGBTQ leaders have sent a letter to President-elect Joe Biden asking him to name former Congressman and undersecretary of the Army Patrick Murphy as Veterans Affairs secretary. Photo: Courtesy patrickmurphy.com

Several Bay Area LGBTQ leaders are backing a straight Iraq War veteran to be the secretary of Veterans Affairs in the Biden administration.

They are among the signatories of a December 8 letter sent to President-elect Joe Biden urging him to pick former U.S. Representative and acting secretary of the Army, Patrick J. Murphy, as the 11th person to lead the federal department responsible for the health care and other needs of the country's 17.4 million veterans.

Biden, however, announced Thursday, December 10, that he was nominating Denis McDonough to lead the VA. A White House chief of staff during the Obama administration, McDonough also served as a deputy national security adviser and was chief of staff of the National Security Council.

"McDonough helped lead the Obama-Biden administration's work on behalf of military families and veterans, and earned the trust of the President-elect as a first-class manager with the knowledge and vision to deliver results," stated Biden's transition team in a news release. "McDonough knows the ins and outs of government, and if confirmed, he will pull every lever to deliver results for veterans and their families."

There had been speculation that gay former South Bend Mayor Pete Buttigieg, a member of Biden's transition team, would be named the veterans affairs secretary. But he reportedly was not interested in the position.

CBS News recently reported that Buttigieg, the retired Navy Reserve intelligence officer who served in Afghanistan, is now under consideration for a foreign policy role. Biden previously announced that Linda Thomas-Greenfield was his pick to be U.S. ambassador to the United Nations.

Many LGBTQ leaders have called on Biden to name the first out person to a cabinet level position in his administration. To date, his LGBTQ appointees have been to lesser roles.

Asked about making an LGBTQ cabinet appointment during an email interview with the Philadelphia Gay News in October, Biden was noncommittal in his answer. He did pledge to "nominate and appoint federal officials and judges that represent the diversity of America, including LGBTQ+ individuals."

Former President Barack Obama tapped Murphy, 47, of Pennsylvania, as the 33rd under secretary of the Army, a position in which he served from January 4, 2016 to January 20, 2017. Obama also named him as the acting secretary of the Army January 11, 2016, and Murphy held the position until through May 17 of that year.

In their letter to Biden, who served as Obama's vice president, the LGBTQ leaders wrote that they "believe that Patrick will take on this position with dignity, vigor, and a vision for supporting our brave and patriotic service members. This includes supporting these service members when they return home by supporting military and veteran caregivers who often stand on the frontlines of care for our wounded warriors and veterans."

They also pointed out that Murphy played a key role in overturning the military's homophobic "Don't Ask, Don't Tell" policy that barred LGB military personnel from serving openly in the armed forces. Calling him "a leader" in that fight "would be a huge understatement," they wrote in the letter, which was posted online Tuesday by the news site Politico.

"Patrick not only introduced this legislation in the House on December 14, 2010, and fought for its passage, he worked tirelessly to convince fellow Democrats to support repeal, despite the political risks involved at the time," they wrote. "While Patrick lost his seat in Congress, he has remained a dedicated advocate, ally, and unwavering leader in this fight for full inclusion in our nation's military. Today, he's still speaking out and is committed to our community more than ever before."

Among those signing on to the letter were gay outgoing City College of San Francisco Trustee Alex Randolph, whose husband Trevor is currently serving in the Navy; Aaron Belkin, Ph.D., director of the Palm Center, a San Francisco-based think tank that commissions and disseminates research on gender, sexuality and the military; and former San Francisco AIDS Foundation board chair Tom Perrault.

"Proud to lend my name to the list of LGBTQ leaders from across the country in support of Patrick Murphy to become our nation's next Secretary of Veteran's Affairs," Perrault wrote in a Facebook post Wednesday, December 9. "Former Congressman Murphy has been a staunch supporter of our community, and I am honored to stand with him."

Randolph told the B.A.R. he is confident Murphy will especially keep the needs of LGBTQ veterans front and center if he is put in charge of the federal agency.

"As someone who is married to a veteran, it is important for me to have someone leading that struggling agency that is critical to millions of veterans," said Randolph.

Additional local leaders who signed on to the letter include gay Berkeley Rent Board member James Chang, and San Francisco residents Kate Maeder, a lesbian who is a political consultant, and Joe Sangirardi, a gay man who is the associate director for leadership giving at the Human Rights Campaign, the national LGBTQ rights advocacy organization.

Others who signed the letter included Samuel Garrett-Pate and Valerie Ploumpis of Equality California and Christine Kehoe, a former state senator and assemblywoman from San Diego.