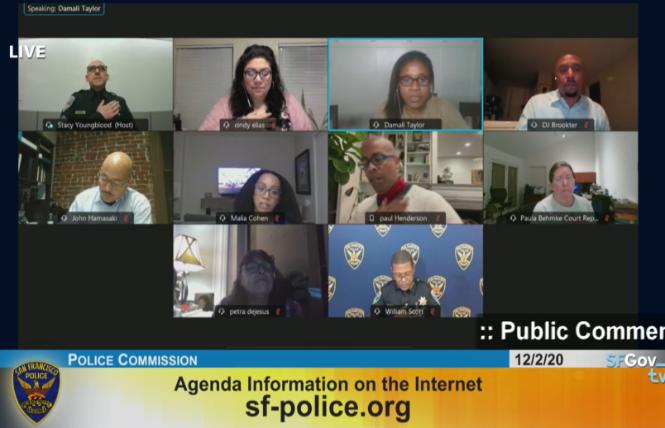 The San Francisco Police Commission passed a revised, gender-neutral grooming standards policy at its meeting December 2, months after a nonbinary police officer was sent home for insubordination for wearing earrings.

"This section seeks to amend specifically established guidelines for wearing jewelry or ornaments," Assistant Chief Robert Moser said during the meeting. "In current language, it specifically refers to gender. This will amend the current policy to eliminate gender. The purpose is to align with city policy related to gender inclusion."

Moser added that this was part of larger, ongoing updates to policy before Department Bulletin 20-163, which amends General Order 10.02, passed the commission 6-0 with little fanfare.

Sarah Hawkins, the chief of staff to the San Francisco Department of Police Accountability, told the Bay Area Reporter that a department bulletin amends a general order as a "stop-gap measure" before a new order can be promulgated.

As the B.A.R. reported in June, nonbinary San Francisco Police Department Officer Rubin Rhodes of Mission Station was reprimanded for wearing earrings one day after taking a knee in front of the station in solidarity with protesters demanding justice for Black people killed by police. (The incident was not mentioned during the police commission vote.)

Rhodes, who could not be reached by the B.A.R. contemporaneously for comment, told the San Francisco Examiner that he had worn earrings on most days over the last five years and his doing so had only been an issue once before. (He told the paper that he uses male pronouns.)

At that time, Matt Dorsey, a gay man who is the communications director of the SFPD, told the B.A.R. that the policy was in the midst of being revised.

"While the San Francisco Police Department can't comment on specific personnel issues, Department General Orders governing SFPD's uniform and equipment requirements and grooming standards are in the process of being updated at this time," Dorsey said.

Police Chief William Scott told the B.A.R. December 5 that the policy change has been in the works for years and involved input from stakeholders. In-person meetings had been held to get input from officers until shelter-in-place began in March, due to the COVID-19 pandemic.

"We had focus group meetings with anywhere from 10 officers, I think the largest crop was 30-40 officers, to get their feedback and everything," Scott said. "That went on for nine months, up until the time in March when we were forced to stop because of the public health protocols, but that was part of the process. I've talked to hundreds of officers about this issue, and I actually talked to community members as well, so it's been an ongoing thing that went on way before June."

Mayor London Breed's office, which had told the B.A.R. in June that the policy would be updated, did not respond to a request for comment as of press time.