Beckles sworn in on AC Transit board 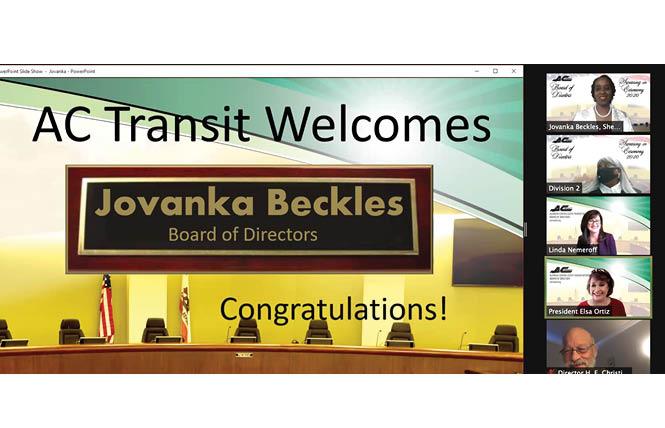 Jovanka Beckles, top right, was sworn in on the AC Transit board December 4. Photo: Screengrab via Zoom

The AC Transit District Board of Directors again has an out member, as Jovanka Beckles was sworn into office during a virtual ceremony Friday, December 4.

Beckles, a lesbian, won the Ward 1 seat in November, defeating incumbent Joe Louis Wallace. According to certified results read at Friday's meeting, Beckles won with 50.12% of the combined votes in Alameda and Contra Costa counties. Beckles previously served on the Richmond City Council.

"I am so thrilled to know so many of my family and friends are here," Beckles said during her remarks after taking the oath of office. Some were watching the Zoom call from outside the Bay Area.

"Most important is my spouse, Nicole Valentino," Beckles said, adding that she was watching from a nearby room.

Beckles ran with the strong support of organized labor and she thanked unions that backed her.

"Our campaign was people-powered," she said. "Although we worked hard to get here, the real work begins now."

She said that seniors, those with disabilities, Black and Brown people, and others who use the bus need to get to their locations.

"I will be fighting austerity and needless cuts," Beckles said, "and not balance the budget on the backs" of workers.

AC Transit hasn't had an out member since Rebecca Kaplan, a lesbian now serving as the Oakland City Council president, sat on the board in the 2000s.

The meeting also saw the swearing in of another new director, Jean Walsh, representing Ward 2. She won with 76.7% of the vote in Alameda County, where her district is based. Walsh easily beat incumbent Greg Harper.

Walsh thanked Harper for his service and said she wanted to work toward "a more equitable Bay Area transportation network."

H.E. Christian "Chris" Peeples was reelected to the district's sprawling at-large seat with 61.43% of the combined vote in Alameda and Contra Costa counties. He was sworn in to another term.

Board President Elsa Ortiz pointed out that there is now a female-majority of the seven-member board with the election of Beckles and Walsh.

In his remarks, Peeples congratulated Beckles and Walsh, as did several other board members.

"I'm very excited to work with this board," he said. "To our operators, thank you so much."

Hursh expressed that he's looking forward to 2021 after the crises of 2020, including the pandemic.

"A diverse board, a Democratic presidential election, and a vaccine coming," he said of things he is anticipating in the new year before advising everyone to "wear your masks, please."

Beckles wasn't the only East Bay LGBTQ elected official to take office this week. In Emeryville, City Councilman John Bauters, a gay man who was unopposed in his reelection, was sworn in to another term December 1.

Bauters said he's looking forward to the work ahead.

"I'm grateful to the people of Emeryville for the opportunity to continue serving our wonderful community," he wrote in an email. "I am far more optimistic about the prospects for our nation as I start my second term than I was in 2016, and I look forward to helping build a more just and equitable Bay Area for everyone."

In Berkeley, Terry Taplin, a gay man who ousted District 2 City Councilwoman Cheryl Davila, was sworn in to his first term December 3.

Davila phoned in to the AC Transit meeting to congratulate Beckles.

Updated, 12/7/20: This article has been updated with comments from John Bauters.