Out in the World: Report shows that transgender lives continue to be at risk 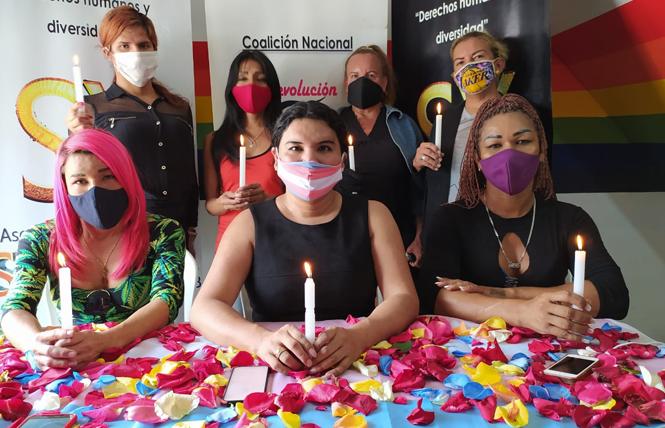 Despite the grim news, the community is resilient. Some transgender communities, like in China and Ecuador, are insisting upon being visible while remembering members of their community lost to brutal violence at the hands of others or by their own hands.

TDOR is usually marked by vigils around the world. This year China marked the observance with a weeklong art festival, and Ecuador opened the Museum of Trans Memory, which is dedicated to those killed due to anti-trans violence in the South American country.

A majority of the homicides happened in Central and South America, according to TGEU's report.

Brazil ranks #1
In 2020, Brazil continued its dubious distinction of topping the list for the most killings of transgender people with 152, or 43% of global deaths, according to TGEU's report.

Transgender suicide rates also increased in the country. The National Association of Transvestites and Transsexuals, or ANTRA, reported suicide rates for transgender Brazilians rose by a third in 2020 over last year. Sixteen transgender people died by suicide within the first six months of 2020, reported the organization, which released its report in September, according to Reuters.

Mexico held the second highest rate of transgender homicides, reporting 57 this year, according to TGEU's report.

A separate report by the Human Rights Campaign found total homicides of transgender people so far this year in the United States is 34, reported Forbes.

In the United Kingdom, transphobic hate crime reports have quadrupled over the past five years, according to the TGEU report.

A fifth (22%) of the killings happened inside the victims' own homes, according to the TGEU report. It noted that the average age of the individuals killed was 31. The youngest was 15 years old.

Another report
A separate report focused on Fiji's transgender community, "Every Breath a Transgender Woman Takes is an Act of Revolution: Fighting for Intersectional Justice in Fiji," was published November 20 by Haus of Khameleon, the country's transgender organization. It found that 70% of Fijian transgender women have experienced violence, reported Fiji Village.

Transgender Fijian women living on the South Pacific island country have experienced physical violence (63%), sexual violence (36.8%), and emotional or verbal abuse (73.7%) since coming out, according to the organization's report.

The most common perpetrators of violence on transgender women were family members at the time of the victim's disclosure of their gender identity, according to Haus of Khameleon's report.

TGEU has published recorded transgender homicides between October 1 and September 30 annually since 2008. A total of 3,664 murders have been recorded since the project's beginning, including this year.

Advocates cautioned the figures could be much higher due to deaths being underreported or media misreporting homicides.

COVID-19's affect
This year's TGEU report was also impacted by the COVID-19 pandemic, which has disproportionately affected LGBTQ people, particularly the transgender community.

"COVID-19 may be a new killer — but hate has been killing us for decades," Joey Mataele, a trans activist from Tonga, told Amnesty International.

"The impact of COVID-19 is being felt most severely by trans people who are homeless, sex workers, disabled, migrants, refugees, asylum seekers, poor, and/or elderly," Lukas Berredo, the Transrespect versus Transphobia Worldwide research project coordinator and author of the TGEU report, told Forbes.

Berredo noted that people living on the margins of society suffer the most not only due to the virus, but also by the health care system and providers, the socioeconomic and political impact of the pandemic, and anti-LGBTQ governments taking advantage violating human rights.

"At the same time, we are noticing some governments using the pandemic as an excuse for violating human rights, with signs of a wide range of political and legal rollbacks leading towards more systemic discrimination against trans people in the world," he said pointing to Hungary, which initiated a set of new anti-LGBTQ laws earlier this month, and Poland.

Two of those seats were in Sao Paulo, the country's largest city and financial center.

PSOL candidate Linda Brasil of Aracaju, the capital of the northeastern state of Sergipe, won a seat on the city council.

Duda Salabert with the center-left Democratic Labor Party, won her council seat in Belo Horizonte, the capital of the southeastern state of Minas Gerais.

Salabert won the most votes out of any candidate this election. Salabert and Brasil are also the first elected transgender councilmembers in their cities, reported the Deccan Herald.

This was the first time that transgender candidates in Brazil could run using their chosen names rather than the names registered on their birth certificates.

According to ANTRA, the number of openly transgender candidates who ran this year, 281, was higher by three-fold compared to four years ago when only 89 transgender people ran for office. The candidates ran for local positions and represented both conservative and progressive political parties.

Similar to New Zealand and the United States, Brazil's historic election was also the most diverse with a record number of women and people of color who ran for office.

Keila Simpson, president of ANTRA, told Deutsche Welle that the impetus for so many transgender individuals running for public office this year could be connected to the violence they face daily.

"That's why there is a political awakening in the community. Trans bodies are political in themselves, but to run as a candidate is a statement against all those who want to relegate them to the fringes of society," Simpson told the newspaper.

No transgender candidates were elected in Rio de Janeiro, but Monica Benicio won a city council seat. Benicio is the widow of Marielle Franco, the Black lesbian city councilwoman who was assassinated in 2018.

The midterm municipal elections are often seen as a litmus test for how voters are feeling in the country ahead of the next presidential election.

President Jair Bolsonaro, who won in 2018 and has openly made homophobic, transphobic, and racist comments, faces his bid for a second four-year term in 2022.

To read the report, visit https://transrespect.org/en/research/tmm/

Rwanda has declined to criminalize homosexuality, making it one of 22 of Africa's 54 countries without laws against LGBTQ people, according to Vice World News.

Rwanda actually signed onto the United Nations statement condemning global violence against LGBTQ people in 2011. It was one of only six African nations to do so. In total, 85 countries signed the agreement.

In 2016, President Paul Kagame told the Bay Area Reporter, "It hasn't been our problem and we don't intend to make it a problem," when asked about LGBTQ rights and the community in Rwanda.

There might not be any laws against LGBTQ people in Rwanda, but the country's transgender community and advocates are mobilizing against wrongful arrests, detentions, and abuses made by authorities in the face of ongoing government denials.

Speaking to Vice, advocates described efforts to train law enforcement and other agencies about LGBTQ rights and a legal hotline recently set up has helped some queer Rwandans get released from rehabilitation centers.

Bella, Gabi, and Nunu, all trans women, and Mugisha, a gay man, shared similar stories. They spoke to Vice using pseudonyms to protect their safety.

The activists described multiple incidents of being targeted by Rwandan authorities for being LGBTQ, despite the fact that homosexuality is not included in the law as "deviant" behavior.

Authorities detain LGBTQ individuals based on other crimes that are considered deviant.

"If they catch you and they can see that you're gay, they'll just take you, even when you've done nothing," Mugisha, who was sent to the center multiple times during the mid-2000s, told Vice. "The ones who looked girlish were always beaten up. They never let those kids go. They would stay there and suffer."

The activists were all transferred to Gikondo Transit Center, the largest temporary rehabilitation facility in Kigali, Rwanda's capital city.

There are 28 similar facilities throughout the country where people are detained for deviant behavior under Rwanda's vague laws.

The activists, who were detained multiple times at the center, all described incidents of humiliation, verbal and physical abuse, sexual assault, and unsanitary conditions.

Lewis Mudge, central Africa director of Human Rights Watch, told Vice that the center, and others like it, "skirt accountability" because it "falls under the notion of rehabilitation."

Sulemani Muhirwa, a human development initiative program officer primarily serving the LGBTQ community, and the coordinator for one of the community centers in Kigali, has been working to educate authorities about LGBTQ people and their rights for a decade, he told Vice.

He said he is seeing some of his efforts pay off. For example, LGBTQ people obtaining legal representation while in detainment has been successful.

In July, the organization successfully obtained the release of five transgender people from the center, Mulisa, a hotline representative who only identified themselves by their first name, told Vice.