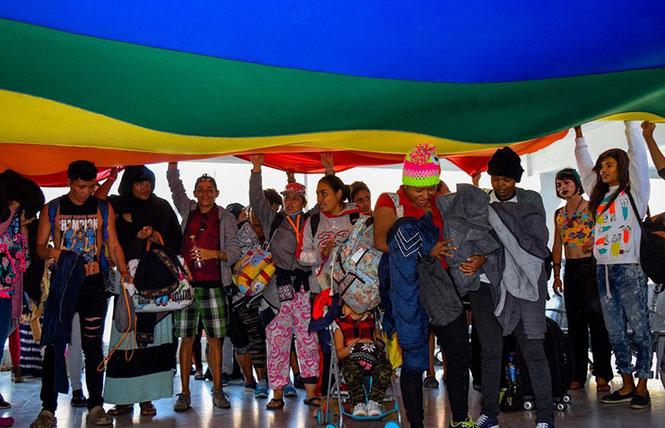 President Donald Trump's administration keeps throwing one obstacle after another at asylum seekers at the U.S.-Mexico border, but LGBTQ asylum seekers continue to dream of coming to the United States.

"If I get asylum in the U.S., I will go wherever I have a sponsor," Marina T., a 28-year-old trans hairstylist from San Pedro Sula, Honduras, told Human Rights Watch researchers. "I want to become independent, find work, finish my studies, and live a life full of peace, full of love, the love that I never received from my family in Honduras. I don't want to keep suffering."

Participants in the report about LGBTQ asylum seekers from El Salvador, Guatemala, and Honduras were only identified by their first names and the first initial of their last names to protect their safety. The area is also known as the Northern Triangle of Central America.

This text will be the link"'Every Day I Live in Fear': Violence and Discrimination against LGBT People in El Salvador, Guatemala, and Honduras, and Obstacles to Asylum in the United States,"> was published by HRW October 7.

Marina T. is one of the many LGBTQ migrants from the Northern Triangle who are still dreaming of a better life in America.

Marina T. told HRW researchers that in San Pedro Sula, she was gang-raped by nine members of the MS-13 gang in 2017. The men broke her clavicle.

"I had nowhere to flee in my country," she said, believing her brother, who is transphobic, had something to do with the attack that night after she left work.

As soon as the clinic informed her that she tested negative for HIV following the sexual assault she fled for America.

Marina T. has been waiting in Tijuana for her metering number to be called by the U.S. Customs and Border Protection.

The U.S. border patrol is only allowed to let a limited number of asylum seekers cross over the Mexican border into the U.S. each day. The global coronavirus pandemic has only prolonged the wait for many anxious LGBTQ asylum seekers stuck at the border in a situation that is not much better than the one back home.

Many gay men, lesbians, and transgender women told Neela Ghoshal, senior researcher at the LGBT Rights Program at Human Rights Watch, and her small team of researchers, stories about being raped and beaten up by Mexican men.

Going to Guatemala is not an option for Mariana T. The gang network is broad, and Guatemala is too close to her home country.

"They could find me in Guatemala and kill me," she said.

Mexico and Guatemala, countries that the U.S. has selected to host asylum seekers, are not LGBTQ asylum seekers' ultimate destination. It is not safe in either country for them. They are keeping their eyes on the prize: the U.S.

Inspiring rainbow caravan
At the end of 2018, when caravans of migrants fleeing the Northern Triangle arrived along the U.S.-Mexico border, one caravan stood out.

Inspired by the rainbow caravan, Ghoshal and her team spent the past year and a half interviewing 116 LGBTQ migrants from the Northern Triangle and 93 government officials and experts.

The results were revealed last week with the publication of the report that documents LGBTQ asylum seekers' accounts of why they fled their homeland to their hopes and dreams. It also provides insight into experts and decision-makers' experiences within the system.

Ghoshal hopes the report will be a resource for decision-makers as reliable information about the situation in the Northern Triangle for LGBTQ people and a tool to advance country-level reforms.

Report critical of Egypt
The alleged torture by Egyptian authorities of lesbian activist Sarah Hegazi was too much for the refugee, who fled to Canada to start a new life but died by suicide in June.

She is not the only one. More than a dozen LGBTQ Egyptians spoke to Human Rights Watch about years of routine harassment, arrest and detainments, and torture of queer Egyptians by the Arab country's police and National Security Agency.

Earlier this year at the United Nations Human Rights Council, Egyptian officials denied that LGBTQs exist and ignored international calls to stop systematic abuses against queer people in the country.

The government charged Hegazi with "promoting debauchery" and for joining an illegal organization that "threatens public and societal peace," Hegazi's lawyer and friend Mostafa Fouad told CNN. Fouad said the second charge was usually leveled against Islamists and political dissidents.

Hegazi's alleged crime was being one of several people who raised and waved a rainbow flag before an estimated 35,000 people at a concert in 2017 where a band featured an openly gay lead singer.

Authorities arrested about 75 people, including Hegazi and her friends, and detained them for months during the crackdown. While in custody, the police verbally and physically assaulted them.

The report
In the new report and video, "Egypt: Security Forces Abuse, Torture LGBT People," published earlier this month, HRW details the experiences of 15 LGBTQ Egyptian and activists' experiences, as well as lawyers representing the victims since that concert.

Al-Sisi has led the predominantly Sunni Muslim country since 2014. He has a long history serving in Egypt's military and government.

Al-Sisi has leveraged his authority, chipping away at the country's laws and limiting outside political influences to strengthen his rule with the military's backing.

"Egypt has unabashedly continued to target and abuse LGBT people simply for who they are," said HRW Researcher Rasha Younes in the report. "Egyptian authorities seem to be competing for the worst record on rights violations against LGBT people in the region."

Furthermore, Younes called Egypt and the international community's silence on the issue "appalling."

The United States is one of Egypt's closest allies.

Homosexuality is not illegal in Egypt, but authorities often invoke an anti-prostitution law to arrest and detain suspected LGBTQ people. The 1960s law cites a clause against debauchery that the courts have interpreted to include homosexuality in the Arab country, reported the Post.

Same-sex relationships are deemed socially unacceptable by Egyptian government authorities and society in the in the North African country.

During the country's third Universal Periodic Review before the U.N. Human Rights Council, Egyptian officials outright rejected the existence of LGBTQ people and the need to protect members of the queer community.

At the same time, Egyptian officials "vowed" to the council it was "safeguarding human rights [and] ensuring equal rights and opportunities to all citizens without discrimination." Officials added that the country was "thoroughly" investigating all torture cases.

Not buying it
HRW did not buy Egyptian officials' claims.

During its investigation, the organization found that entrapment, arrests, detainment in subpar human conditions, and torture carried out by Egypt's police and National Security Agency are routine.

The human rights watchdog organization worked with a Cairo-based LGBTQ organization (the organization's name was withheld for security reasons) interviewing LGBTQ Egyptians who were prosecuted for debauchery under the law between 2017 and 2020.

The organization accused the Egyptian government of violating the people's rights, including denying the right to legal counsel, medical care, and forced signed confessions.

HRW reported that as recently as late August, authorities arrested two Egyptian men who allegedly witnessed a high-profile gang rape in Cairo's Fairmont Nile City Hotel in 2014. The men were to provide evidence in the case to police. However, the officers unlawfully searched the men's phones during their detainment at the al-Tagamoa First Police Station. The authorities found photos of the men allegedly engaged in gay sex. They used that to keep the men in custody, which was approved by judges several times. The men were cut off from communicating with anyone in the outside world for several days and subjected to forced anal examinations. The two men now potentially face charges of debauchery under Egyptian law.

Leading up to the court hearings, they could face similar abuses as some LGBTQ survivors of Egyptian detainment experienced.

An unidentified female activist who was detained at a protest in 2018 described in the report being subjected to three separate "virginity" tests during her detention. She told HRW that a female officer "grabbed and squeezed" her breasts and vagina while examining her before opening her anus.

The officer "inserted her hand inside so deep that I felt she pulled something out of me. I bled for three days and could not walk for weeks. I couldn't go to the bathroom," she said. "I developed medical conditions that I still suffer from today."

An unidentified man detained by authorities in 2019 described being beaten senseless before being tied up while standing in a dark, unventilated room. He was left in the position for three days, according to the report.

"They didn't let me go to the bathroom. I had to wet my clothes and even shit in them," he said. "I still had no idea why I was arrested."

A majority of the victims were eventually let go and acquitted of the charges brought against them, but the damage was done.