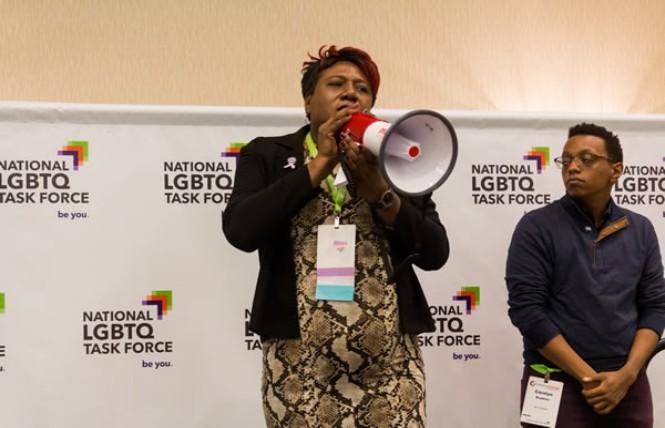 Monica Roberts, a prominent transgender activist and journalist who shined a light on trans violence and other issues, has died.

"This week, the LGBTQ+ community lost one of our fiercest voices in Monica Roberts, an activist who not only lifted up the stories of trans people and inspired generations of countless transgender and nonbinary people but all those who knew her," Rea Carey, executive director of the task force, stated. "She was a mother, sister, aunt, friend, protector, and voice for the voiceless. Her journalism was groundbreaking, her advocacy impactful and her spirit and passion limitless. There are people — especially trans members of our community — who are alive and thriving today because of her work."

Roberts lived in Houston. Details of her death were not immediately available.

Roberts reportedly died Monday, October 5, according to a tweet.

Dee Dee Watters gave an announcement that is confirmed. She passed Monday (@TransGriot that is).— Riley Johnson (He/They) (@lovefortified) October 8, 2020

Carey said the task force honored Roberts earlier this year at its Creating Change conference, where she received the Susan J. Hyde Award for Longevity in the Movement.

"She spoke powerfully at a rally decrying the epidemic of violence against the trans community at the same 2020 conference, which she meticulously reported on, often providing support to local communities and families, while holding the media and law enforcement accountable and seeking justice for her trans siblings," Carey stated. "One could not be in her presence without being inspired to be a better activist — including me. Our hearts are with her family, her innumerable friends and colleagues and especially the trans community, which has lost an elder, a pioneer and a extraordinary human being."

Alphonso David, president of the Human Rights Campaign, called Roberts "an icon and a trailblazing voice for transgender rights" in reaction to the news that she had died.

"We are deeply saddened to learn of her passing, and offer our most heartfelt condolences to her friends, family, and loved ones," stated David on behalf of the national LGBTQ advocacy organization. "For decades, Monica has been a fierce leader — bringing light to the injustice transgender people face, especially Black transgender women. She leaves behind a strong, and vital legacy — one that every LGBTQ person and ally should work to honor and advance. Rest in power, Monica, and thank you."

Roberts was the founding editor of the award winning TransGriot blog, and a longtime award-winning human rights advocate. She advocated for the human rights of transgender people for more than 20 years, with a focus on the issues affecting Black trans people.

Some of the honors that Roberts has received are the 2018 GLAAD Media Award, the Robert Coles Call of Service Award from Harvard University's Phillips Brooks House Association, the Virginia Prince Transgender Pioneer Award, the Barbara Jordan Breaking Barriers Award from the Harris County Democratic Party, the IFGE Trinity Award, and being named to the 2019 OUT 100.

"The loss of Monica Roberts is devastating. She was an unstoppable advocate and a powerful voice, always speaking up for justice and uplifting the trans community," said GLAAD President and CEO Sarah Kate Ellis. "Part of her advocacy was work creating her own media stories, and fighting to change and shape mainstream media's coverage of trans people. She told the stories about Black trans people that weren't told elsewhere. Her legacy will live on in all of the trans advocates she empowered through her own community work, and through her revolutionary TransGriot blog which preserves trans history and provides an in-depth portrait of the fierce, funny, brilliant, incisive woman who created it."

GLAAD sent a clip of Roberts receiving her award.

This story will be updated as more information becomes available.

Updated, 10/8/20: This article has been updated with comments from HRC and GLAAD.