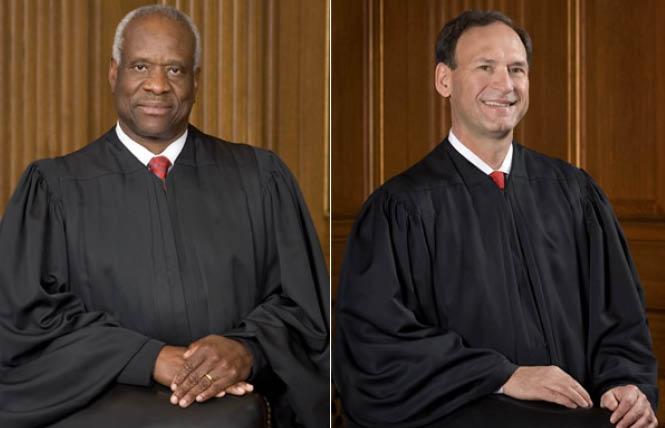 Associate Justices Clarence Thomas and Samuel Alito used the October 5 opening day to make an unusual, unsolicited statement indicating they are still opposed to the Supreme Court's 2015 decision in Obergefell v. Hodges, which struck down state bans on marriage for same-sex couples.

Thomas and Alito made the declaration alongside the court's announcement that it would not hear the appeal of a Kentucky county clerk, Kim Davis, who refused to issue marriage licenses to same-sex couples in defiance of Obergefell.

Thomas and Alito's statement complained that the Obergefell decision had forced Davis to choose between her religious beliefs and her job.

They did not mention that Davis lost her appeal at the 6th U.S. Circuit Court of Appeals before a panel of three Republican appointees, including Judge John Bush, an appointee of President Donald Trump.

"Davis may have been one of the first victims of this court's cavalier treatment of religion in its Obergefell decision, but she will not be the last," warned the statement penned by Thomas. "... Obergefell enables courts and governments to brand religious adherents who believe that marriage is between one man and one woman as bigots, making their religious liberty concerns that much easier to dismiss."

Thomas and Alito agreed that the case Davis brought before the Supreme Court did not "cleanly" present an issue through which the court could revisit Obergefell and address "a problem that only it can fix."

Until then, Obergefell will continue to have "ruinous consequences for religious liberty," the statement read.

Davis needed at least four justices to say yes in order for the high court to take her appeal. She got only two, even though the court currently has five conservative justices.

Her appeal did not win the support of Chief Justice John Roberts Jr., who also dissented in the Obergefell decision. And it did not get the support of Trump's two appointees — Neil Gorsuch and Brett Kavanaugh.

What troubles LGBT legal activists, however, is that the Obergefell decision in 2015 was a close one: 5-4, with now-retired Justice Anthony Kennedy joining four liberal justices in the majority. Now, not only is Kennedy gone but so is another member of the Obergefell majority: Ruth Bader Ginsburg, who died September 18 following a long struggle against cancer. And, to replace her, Trump has nominated a judge with a documented hostility to same-sex marriages: Amy Coney Barrett.

"The nightmare of a hostile Supreme Court majority is already here," said Lambda Legal Defense and Education Fund CEO Kevin Jennings. "The confirmation hearings for Judge Amy Coney Barrett haven't even started yet and Justices Thomas and Alito are already creating a laundry list of cases they want to overturn. And unsurprisingly, marriage equality is first on the chopping block. Confirming Judge Barrett would be the final puzzle piece they need in order to make it happen.

"Overturning our right to legally marry the person we love and to protect our families would only be the beginning," said Jennings, adding, "none of the hard-fought rights that we have won in the courts are safe. That includes the right to marry, to work, or to be recognized as the legal parents of our children."

The Human Rights Campaign issued a statement saying that, while it is good news that there were not four justices to grant Davis' appeal, Thomas and Alito "took it as an opportunity to renew their war on LGBTQ rights and the historic marriage equality decision ...