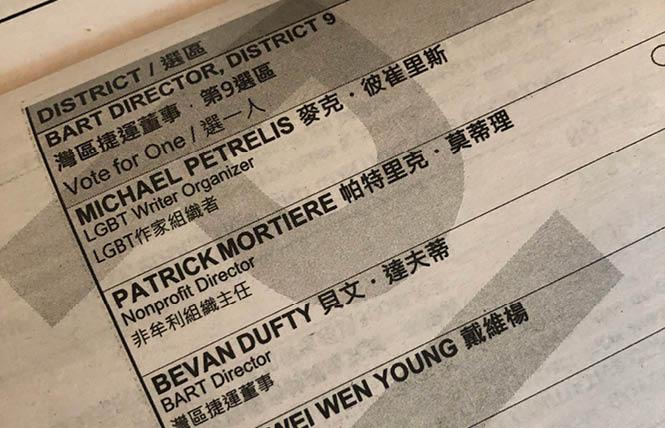 Longtime gay activist and BART District 9 board candidate Michael Petrelis is believed to be the first person to use LGBT as part of his ballot designation. Photo: Matthew S. Bajko

A San Francisco candidate for a seat on the board that oversees the regional BART transit agency is believed to be the first to use the LGBT acronym as his ballot designation. It may also mark the first time anyone seeking public office in the country has outed themselves in such a manner on a ballot, according to LGBTQ political watchers.

When San Francisco voters receive their mailed ballots or head to the polls, they will notice that in the contest for the District 9 BART board seat the first of the four candidates running is listed as Michael Petrelis "LGBT Writer Organizer." The city's elections department told the Bay Area Reporter that it has records of ballot designations going back to 2000 and that this year is the first instance of a designation referencing "LGBT."

The database also shows that no candidate has ever used the individual words that make up the LGBT acronym — lesbian, gay, bisexual, and transgender — in their ballot designation over the last two decades. A ballot designation is meant to reflect the candidate's main occupation or source of income and is limited to three words.

Normally, adjectives such as LGBT are not allowed. While there is no outright ban on using LGBT or the acronym's individual words, a candidate couldn't call themself a "gay supervisor" or "lesbian Assemblywoman" on the ballot, explained SF Elections Director John Arntz.

"There is no prohibition on using any wording or language," he explained. "We make our decision on the ballot designation based on how the candidate describes their principal activity for work and source of income."

Petrelis is a gay man living with HIV who is a longtime AIDS activist and advocate for LGBTQ rights. Four years ago when Petrelis first ran for the BART seat, he told the B.A.R. he tried to use "LGBT blogger" as his ballot designation but a staffer at the elections department told him it wasn't allowed.

He recalled he was also denied using LGBT on the ballot when he ran in 2014 against gay then-District 8 supervisor Scott Wiener, who was seeking reelection to his board seat. Petrelis said he wanted to use LGBT instead of gay since it is what the community widely uses these days.

"The third time was the charm," said Petrelis, adding, "so much of my activism has been to be present as a gay, as a proud gay man. And in this BART race, I wanted visibility on the ballot and I achieved it."

Bevan Dufty, a gay dad and former San Francisco supervisor who was elected four years ago to the BART board's District 9 seat, is listed as "BART Director" on this year's ballot, as he is seeking a second four-year term. Long involved in San Francisco politics, Dufty told the B.A.R. he couldn't recall ever seeing a local candidate use LGBT terms in their ballot designation.

"I have known Michael over 20 years and his ballot designation is the identity and occupation I have known him to have," said Dufty, who is expected to easily win the race. "I commend him for making progress to be the first to my knowledge to have LGBT as part of a ballot designation. That is progress."

As for the other two challengers trying to unseat Dufty, Patrick Mortiere is described as a "Nonprofit Director" and David Wei Wen Young is listed as an "Engineer" in their ballot designations.

Sunday, October 4, the California Secretary of State's office told the B.A.R. its staff couldn't recall a state or federal candidate requesting to use LGBT in their ballot designation. Sam Mahood, press secretary for Secretary of State Alex Padilla, noted that were a candidate to request to do so, it would be evaluated on a case-by-case basis.

"The use of the acronym LGBT (or any of the words that make-up the acronym) is not explicitly contemplated in state law," wrote Mahood in an emailed reply. "If a candidate were to request a ballot designation that included LGBT, it would have to be evaluated by Secretary of State staff (just like any other ballot designation) to ensure the entire ballot designation was consistent with state law. Context with how it was used would likely be important."

Asked if it was aware of another LGBTQ candidate declaring their sexual orientation or gender identity in a ballot designation, LGBTQ Victory Fund spokesman Elliot Imse told the B.A.R. that the national group that helps to elect out candidates believes Petrelis is the first to do so.

"We cannot think of or find evidence to the contrary," Imse replied, noting that they aren't aware of many other cities or states using ballot designations. "That said, for a candidate for public office to share their LGBTQ activism on the ballot itself is a testament to where we are and where we are heading."

Voting begins October 5 in SF
All registered voters in San Francisco should start receiving mail-in ballots for the November 3 election beginning Monday, October 5. Due to the coronavirus pandemic, state officials ordered county registrars to mail out ballots to everyone on the voter rolls in order to decrease the number of people voting in person this year.

Local election officials are advising that the safest way to vote this fall is for voters to mail in their ballot. San Francisco voters concerned about their ballot getting lost in the mail can turn it in at the city's Voting Center, which has been moved outdoors because of the health crisis and will be in front of the Bill Graham Civic Auditorium at 99 Grove Street, between Polk and Larkin streets.

"We want everyone to feel comfortable voting this November, which is why we have adapted our Voting Center and polling places to make sure San Franciscans still have a safe and accessible place to cast their ballot," stated Mayor London Breed. "While voting in the November election will look mostly the same to voters as in years past, there are some differences because of this pandemic."

Beginning on Halloween, October 31, and through November 3, San Francisco voters will also be able to drop-off their ballots at the Chase Center, the Bayview/Linda Brooks-Burton Library, the Excelsior Library, and at Portsmouth Square in Chinatown.

"Make your plan now for making sure your ballot gets in on time and is counted," advised Breed. "And for those who haven't registered yet, you can register now online or at our Voting Center. So many have given so much to ensure that we all have the right to vote, so let's do our part by voting this November."

On Election Day, San Francisco plans to have 588 polling places throughout the city. Voters can locate their polling place here.

People can also check the wait times at the various polling places online.

Anyone with questions about registration or voting can call the Department of Elections at (415) 554-4375 or email sfvote@sfgov.org

UPDATED 10/5/2020 with a response from the California Secretary of State's office.