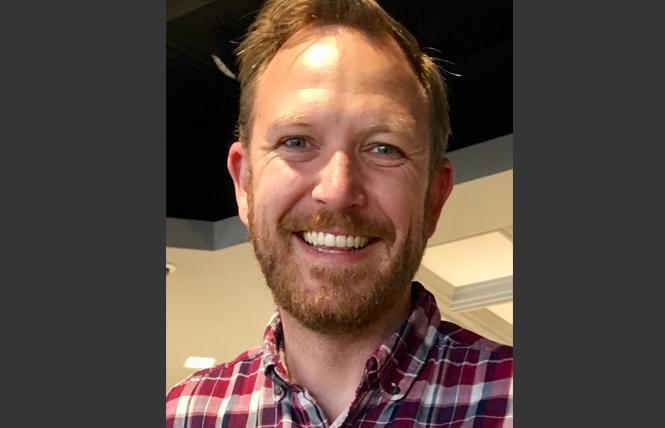 A gay couple who were early pioneers in the cannabis edibles business are moving to a small town in Colorado, hoping the change will enable them to rebuild and expand Somatik, their artisan infused cold brew coffee and chocolate brand.

"I'd say we are transforming the business," said co-owner Chris Schroeder, who launched the brand in 2016 with partner (in business and in life) Clayton Coker, a Stanford-trained scientist with a background in genetics. Schroeder previously worked for a number of Bay Area companies before founding Somatik in 2016.

Somatik's infused-coffee products are made using the popular San Francisco brand Ritual, which has retail locations in the city. The one in the Castro, located at the corner of 16th and Market streets, announced its closure last month.

Somatik products will still be available in a number of Bay Area dispensaries, including the Apothecarium, Sava (online), and Harborside.

"We're going to miss our life in San Francisco," said Schroeder, a Bay Area native, "but this isn't goodbye."

The couple are relocating to Pagosa Springs. They plan to return to San Francisco every other month to maintain their business, and will consider moving back to California in the future, perhaps to Santa Rosa, where their packaging facility is located, or somewhere else less expensive than the city.

The decision to move was the most recent in a series of unexpected developments in their four-year journey in the cannabis business, Schroeder said.

Prior to the passage of Proposition 64, which legalized adult use of cannabis in 2016, Somatik was sold in dozens of dispensaries around the state as medical marijuana, which was legal under 1996's Proposition 215. "We were so well received by dispensary buyers that we may have become overly optimistic about the potential of the business," he explained.

But once recreational cannabis was approved, many of the Somatik vendors closed down, unable to obtain a license to operate under the new law. The company downsized while Schroeder and Coker plotted a new path.

Just as the company was solving a series of technical problems facing all manufactures under the stringent regulations of Proposition 64, including expensive changes in labeling, the pandemic hurt sales in the industry.

"We came close to calling it quits a few times," said Schroeder. "But bottom line is we feel that producing a high-quality cannabis product is our way of making a contribution" in these difficult times.

Schroeder discovered medical cannabis while recuperating from an injury and while concocting their cold brew, discovered that a small dose in the morning, and another mid-afternoon, "gave me just the lift I needed," he said. As the workday winds down, Schroeder said he typically enjoys 5 mg. of Somatik, which brings on a "feeling of relaxation with a clear euphoric mind."

"You can definitely still get some work done, but you're more relaxed," he added. While most edibles don't take effect for up to 45 minutes, Schroeder said the typical user of Somatik feels the effects in one-third the time.

In the four years Somatik has been in the marketplace, a number of other infused-coffee products have come and gone, he said. "It was more difficult than anticipated" to manufacture the product at a price point high enough to cover costs and make a small profit. Four-ounce bottles, with 10 mg of THC, were priced between $8-$10.

The company had to lay off its team of five employees and close its manufacturing facility; it now shares a facility with another company. While pandemic-related business closures affected many companies, Schroeder thinks it struck an especially rough blow to the cannabis industry.

"We were hit hard by the cannabis capital crisis" in the fourth quarter of 2019, he said, forcing the company to lay off its team. But, he added, "being named an essential business through the pandemic actually helped us stay in business."

The pandemic has not only kept people at home, but also probably has discouraged many new users from experimenting with cannabis, he speculated.

"It's a social activity. Many people enjoy cannabis with a friend," he added.

Initially, said Schroeder, as the products were greeted enthusiastically by dispensary buyers, "we might have gotten overly optimistic" about the potential of the business.

"Our partnership with Ritual has been fantastic," said Schroeder of the 14-year-old San Francisco coffee startup. "That was one of the things we definitely did correctly."

Schroeder thinks the Colorado market may be ripe for Somatik products. "A town of 2,000 people might have two dispensaries," he said. "They were earlier legalizing cannabis and are still ahead of California."

"Cutting down our expenses will give us a breather and time to see what new products we might add," said Schroeder. "We still feel strongly about Somatik."

"Our goal is the same as it has always been: to continue building a community of people who are interested in integrating cannabis into their lives," he said. "If we can transform the business to the point where it is self sustaining, we will consider it a success."