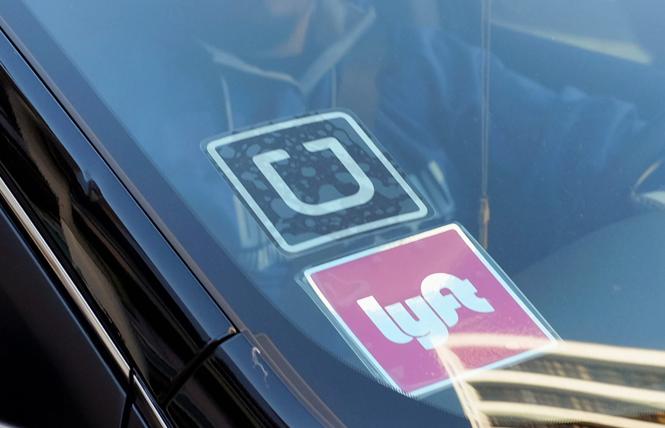 Uber and Lyft are spending millions for Yes on Proposition 22. Photo: Courtesy AP

Employment issues, health care, and consumer privacy are represented by statewide ballot measures that voters will decide in November.

Gig company exemption
In 2018, the California Supreme Court created a test expanding the definition of who constitutes an employee as part of its decision in Dynamex Operations West Inc. v. Superior Court of Los Angeles. Assembly Bill 5, signed into law by Governor Gavin Newsom in September 2019, updated state laws to comply with that decision.

Thus, AB 5 had a number of sweeping consequences for many industries including music, freelance writing, trucking, the arts, and sex work. Some of those are being remedied through the legislative process. Newsom recently signed AB 323, which fixes some aspects of AB 5, notably freelancers.

The rideshare companies took the fight to the November ballot in the form of Proposition 22, which seeks to undo AB 5. Their business models depend on their workers being considered independent contractors and, thus, not entitled to the employee protections that AB 5 mandates Uber, Lyft, and other gig companies provide them. The companies have been threatening to cease operations in the Golden State entirely.

The California Republican Party supports Prop 22. It is opposed by the California Democratic Party, and the Harvey Milk and Alice B. Toklas LGBTQ Democratic clubs. Equality California did not take a position. (Neither of California's major political parties responded to requests for comment for this story.)

"I don't think I can put into words how firmly we oppose Prop 22," Edward Wright, chair of the Milk club political action committee, told the B.A.R. "To say nothing of the fact that it may be the most expensive ballot measure in California history, we think it is dangerous that giant corporations who built their business models violating labor laws can buy their way into self-regulation. That money would be better spent providing benefits to their workers."

The Alice club did not respond to a request for comment.

Assemblyman David Chiu (D), whose San Francisco district includes the headquarters for both Uber and Lyft, voted for AB 5 and is opposed to Prop 22.

"We need to treat employees as employees," Chiu said. "I've heard Uber and Lyft's complaints over the years and they know exactly where I stand."

"It's crucial that we stand with gig workers who make up the backbone of our economy, especially during a pandemic and recession where it's become even clearer how essential they are," Jack Parsons, Wiener's campaign manager, stated to the B.A.R. "Senator Wiener is opposed to Proposition 22, a corporate-backed measure that cynically rolls back important worker protections."

"Lyft, Uber, and other gig companies are spending upward of $110 million to repeal AB 5," Fielder said. "We are not going to tolerate a business model of exploiting workers in California."

The B.A.R. reached out to Uber for comment. The Yes on 22 campaign, which is being funded in large measure by Uber and its competitor Lyft, responded with a statement from Kari Samayoa, a San Rafael-based Lyft driver.

"Eighty percent of app-based drivers work only part-time and rely on flexible work to supplement their income and provide for their families. Last year Sacramento politicians passed drastic new legislation that threatens to make it illegal for app-based drivers to choose independent work," the statement reads, in part. "If Californians pass Prop 22 this November, we would save hundreds of thousands of jobs, protect the ability of app-based drivers to work as independent contractors, and improve the quality of app-based work by requiring platforms to provide drivers guaranteed minimum earnings (120% of minimum wage) and new benefits like health care."

Stem-cell research
Proposition 14 would issue $5.5 billion in bonds to the California Institute for Regenerative Medicine, which will allow it to resume operations. (As of July 2019, the institute had only $132 million left, which led it to stop issuing research grants.)

Prop 14 is supported by EQCA, the Milk and Alice clubs and the California Democratic Party. The California Republican Party opposes it.

"Stem cell research is critical for understanding how diseases occur and how to treat them, particularly HIV and cancer, which the LGBTQ community is disproportionately impacted by," Samuel Garrett-Pate, the communications director for EQCA, told the B.A.R. "Stem cell research is critical to finding treatments and cures to these diseases affecting our community, and could potentially be helpful for COVID-19 as well."

Wright said that the support of the University of California Board of Regents was a major factor in the Milk club's decision.

"The board of regents is in support of this in so much as we want to support it for stem cell research and the advances it can provide," Wright said.

Chiu said that funding the institute now will pay dividends down the line.

"This is certainly research for the future health of all of us," the legislator said. "We should make public investments moving forward in this area."

No political action committees are registered as opposing Prop 14.

Dialysis regulations
A dispute between the Service Employees International Union-United Healthcare Workers West and for-profit dialysis clinics led to Proposition 23, which if passed would require clinics to have at least one licensed doctor on hand at all times except in the event of a true shortage, and would require that certain dialysis data be reported to the California Department of Public Health.

"I think in this instance we trust our labor allies who are supportive of this measure," Wright said of the Milk club's support. "We stand with labor on this issue."

SEIU-UHW West has been battling DaVita Kidney Care and Fresenius Medical Care for years. The union has been supporting measures that would eat into the profit margins of the companies, such as 2018's failed Prop 8, after allegations of poor dialysis clinic conditions and attempts to unionize dialysis clinic workers.

"I support the dialysis measure. This has been a long fight," Chiu said. "It's not acceptable our country has one of the highest dialysis mortality rates while spending the most on care."

Opponents claim the regulations aren't strictly necessary and are ancillary to the union's dispute with the dialysis companies. The California Medical Association, which opposes the measure, did not respond to a request for comment.

Consumer privacy
Proposition 24 is by and large being bankrolled by a single man, San Francisco developer and privacy advocate Alastair Mactaggart, who the B.A.R. was unable to reach for comment.

A deal between Mactaggart and the tech industry led the Legislature to pass new consumer privacy laws in 2018. Mactaggart is now seeking to have a stricter law passed through the initiative process, which would create a new state agency to enforce privacy laws and would allow individuals to ask to be opted-out of company sales of their personal data.

EQCA, the Milk and Alice clubs and the California Democratic Party have each taken either no position or a neutral position. The California Republican Party is opposed.

"We took no position," Wright said. "If we were closer to one than the other, it'd have been no. We think it's probably well-intentioned, and on principle we support greater privacy protections for the public, but we felt this was perhaps misguided. This measure was brought forward by one person who enjoys an incredible amount of wealth and we aren't sure if that is the kind of regulation we'd like to see or that California deserves, so the club took no position on it."

Chiu initially told the B.A.R. he had no position yet and would have to look into it. In September, he stated he is in fact supportive.

"Prop 24 would strengthen privacy protections and close loopholes in current law, while allowing California to adopt stronger protections in the future," he wrote in a text message.

Max Kornblith of the Oakland-based consumer protection service FairShake told the B.A.R. that Prop 24 would represent a move in the direction of consumer privacy.

"If Californians were to vote down Prop 24, I believe that would be taken as a vote against strict privacy standards, and we'd be unlikely to see further improvements. Meanwhile, passing Prop 24 would still leave the door open to further pro-privacy legislation," he said. "It increases the legal privacy protection for some sensitive classes of information like login credentials — don't want those going missing — information on sexual orientation and behavior, and location data; includes harsher penalties for violating the data privacy rights of children; creates a new agency to investigate and pursue privacy breaches, which we are sorely in need of nationally; and prevents the legislature from weakening privacy protections without a public vote."