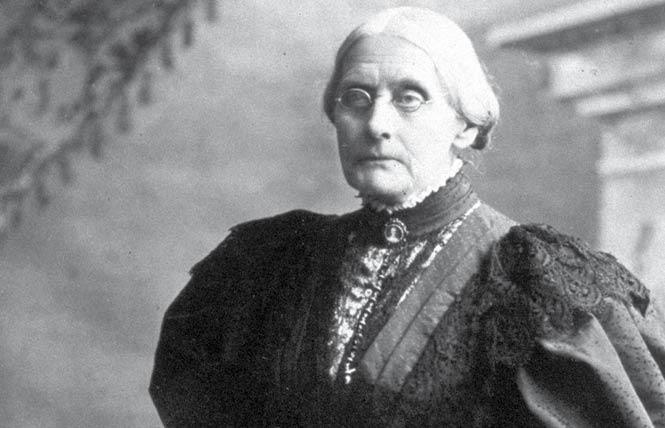 President Donald Trump announced Tuesday that he was granting a posthumous pardon to Susan B. Anthony, who played a pivotal role in the women's suffrage movement. Photo: Courtesy Britannica

In the midst of a controversy over President Donald Trump's attempts to interfere with the right of citizens to vote by mail, he made a surprise announcement Tuesday morning that he will sign a posthumous presidential pardon for Susan B. Anthony, who famously led the fight to allow women to vote.

Anthony, who never married and is believed by many to have preferred same-sex relationships, was convicted in 1872 for voting when it was not yet legal for women to do so.

Trump made his announcement of a "full and complete pardon" for Anthony while hosting a ceremony in the White House with a group of 10 women. The event was to commemorate the 100th anniversary August 18 of the ratification of the 19th Amendment, which guaranteed women the right to vote.

Attendees at the reception included the president of the Susan B. Anthony List, a political action committee that supports anti-abortion candidates. (There is a dispute among historians about whether Anthony opposed abortion.) Other attendees represented conservative groups such as Concerned Women for America and the Heritage Foundation.

The brief ceremony had an awkwardness to it, including Trump telling the women lined up behind his podium that he was about to do something that "I think you'll be very happy with but which nobody knows."

The women behind him did not react but seemed to keep their eyes on first lady Melania Trump.

One of the women held out her hand to shake hands with the president (he did not respond); none of the participants wore masks even though they were all closer than six feet from the president (as recommended by public health authorities concerned with the spread of coronavirus). The White House does take the temperature of all people who come into contact with the president.

He introduced each of the women. At one point, Trump said to one of the women, "Oh, you're going to be so happy in a little while, because we're giving you a special treat that you don't know about."

Trump read from brief prepared remarks, saying he was signing a proclamation of the 100th anniversary and rattling off statistics of women in public office and noting that 70 million vote in elections.

Looking up from his text, he said, "In other words, women dominate the United States," eliciting laughter from the gathering.

The "special treat" turned out to be the pardon of Anthony. Trump told the gathering someone brought the idea to him a week ago, and he said he was surprised that it had not been done before. Again, the gathering laughed but this time also applauded.

"She got a pardon for a lot of other women, and she didn't put her name on the list," said Trump. Trump said the pardon was "being prepared right now" and that he would sign it later. He then proceeded to sign the anniversary proclamation.

According to various historic accounts, Anthony, her three sisters, and 11 other women in Rochester, New York, demanded to register to vote. Then, Anthony and several of the women showed up at the polls a few days later and cast votes. (She voted for incumbent Republican President Ulysses S. Grant.) A local Democratic activist challenged her registration and vote, and local officials soon arrested Anthony and the other women who registered. In a packed federal courtroom before an all-male jury, Anthony was tried and, to her outrage, the judge directed the jury to find Anthony guilty. He sentenced her to pay a $100 fine and court fees. Anthony refused to pay the fine, but the judge ignored that in order to prevent Anthony from appealing her case to a higher court.