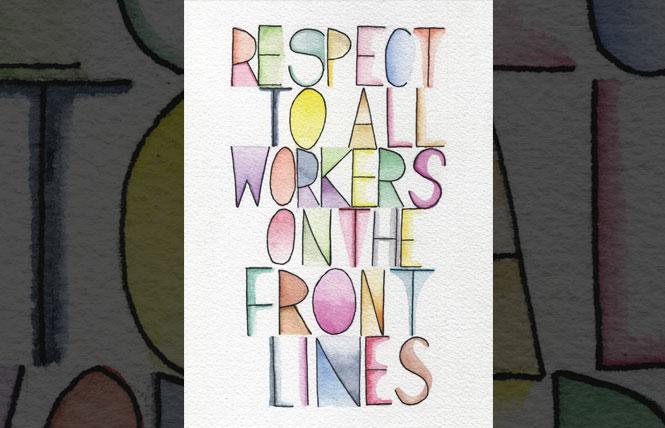 Gay artists are part of two projects currently on display in San Francisco.

In one, the San Francisco Arts Commission Galleries has unveiled "Heroes: San Francisco Thanks Frontline Healthcare Workers," a timely poster series that celebrates and thanks those caring for coronavirus patients.

According to a news release from the commission, the project has two components. Forty kiosk posters line Market Street from the Embarcadero to the Castro, reminding residents and visitors that every day remarkable people in the community are caring for those sick with the virus. Smaller reproductions of the kiosk posters will be distributed to San Francisco-based hospitals and quarantine sites, to be posted on various communal spaces as well as for health care workers to take home as tokens of gratitude.

Cliff Hengst, an artist and gay man of color, made one of the posters.

"I was grateful to be a part of this project," he wrote in an email.

"As an older gay, I was in San Francisco through much of the AIDS crisis, so when the shelter-in-place happened it brought back a lot of those same fears," Hengst, 57, added. "I was honored to be able to express my gratitude toward these brave workers on the front lines. I love my city."

The series also helps engage artists and the arts community in the city's recovery efforts by placing imagery into public spaces that focuses on healing, while reinforcing critical public health messages that can help stem the spread of the virus.

In the fifth month of the virus, San Francisco has experienced a spike in infection rates.

"Health care workers on the frontline continue to work tirelessly to care for those infected with the virus," SFAC Galleries director and project curator Meg Shiffler stated. "This temporary public art poster series allows our arts community to express deep gratitude and is intended to lift the spirits of our remarkable health care professionals working in local hospitals and quarantine sites."

The kiosk posters went up in late July and will remain on display for the next three months.

There are 10 posters in the series and they feature images commissioned for the project by both emerging and established artists. The artwork takes many forms — text-based, figurative, landscape, and abstract — and each artist approached their work from different vantage points.

In the other project, gay and visually impaired artist Kurt Schwartzmann recently completed the first public mural commissioned by the Buena Vista Cafe, a San Francisco institution famous for its Irish coffee. It's located at 2765 Hyde Street.

"The installation is called the 'Love Project,' because of our collective love for San Francisco, for our world, and for you and me," he wrote in an email.

It also was inspired by the pandemic, as the mural will be the launching point for the cafe's new outdoor dining space, he explained.

Schwartzmann, who was formerly homeless, may be familiar to B.A.R. readers. His op-art was featured in last year's Political Notebook and his tribute to Muni workers was explored in the paper's old Seeing in the Dark column.

Online commemoration for Compton's riot
The Transgender District will hold a virtual commemoration of the 54th anniversary of Compton's Cafeteria riot in which trans people fought back against harassment by the San Francisco Police Department. It's scheduled for Friday, August 28, from 5 to 8 p.m. and will be broadcast on the district's Facebook page and Zoom.

The event will feature entertainment from queer and trans performers such as drag artist Juanita MORE!, illusionist Bionka Simone of Asia SF and Transcendent, and rapper and producer WAZI. It will be hosted by Sister Roma of the Sisters of Perpetual Indulgence, and drag artist and Transgender District co-founder Honey Mahogany.

Longtime trans academic Susan Stryker, Ph.D., will deliver the keynote address. Stryker, an Emmy Award-winning filmmaker, will talk about how she discovered transgender and queer resistance of the riot, the exact date of which has been lost to history. Stryker received the Northern California Emmy Award for her work on "Screaming Queens: The Riot at Compton's Cafeteria" (2005).

The riot occurred in August 1966 at Gene Compton's Cafeteria in the Tenderloin. According to the Wikipedia entry, the incident began when a transgender woman resisted arrest by throwing coffee at a police officer. It was followed by drag queens pouring into the streets, fighting back with their high heels and heavy bags and marked the beginning of transgender activism in San Francisco. Three years later, the Stonewall riots occurred in New York City.

"I think this moment is so needed, with everything happening in the world right now," Transgender District co-founder and Executive Director Aria Sa'id stated in a news release. "We wanted to produce a really amazing celebration that highlights the brevity of our queer and transgender culture here in San Francisco. We're excited to curate an evening of escape for transgender folks both here in the Bay Area and across the world — even if just for a couple of hours, and truly put our local performers and icons on center stage."

Sa'id added that they have some "really fun surprises in store."

Sui Generis consolidates to Castro location
Due to realities of COVID-19, the women's clothing and consignment store Sui Generis Women's is closing its 2147 Union Street Location. The collection will move to the company's men's store at 2231 Market Street in the Castro next week, according to an email from spokesman Adam Blackman

Until Saturday, August 22, the women's store is on clearance with up to 60% off consignment prices. Customers could walk out with designer brands at up to 85% off their original retail prices.

According to a news release, the rollout comes as Charity Navigator prepares to celebrate two decades in operation. The new Encompass rating system is a comprehensive evaluation tool that analyzes nonprofit performance based on four key indicators of organizational effectiveness: finance and accountability, impact and results, leadership and adaptability, and culture and community. The first is available now, the others will go live in the next 18-24 months, the website noted.

Since the beginning of shelter-in-place orders due to the novel coronavirus, there has been a surge in donations to nonprofits. That was amplified in June with social unrest following the police killing of George Floyd. Charity Navigator has seen a 200% increase in donations to nonprofits through its Giving Basket compared to the same time period last year, amounting to more than $7 million in total contributions.

In San Francisco alone, 1,058 organizations received their first-ever rating from Charity Navigator. Of those, 744 received a score of 75 or above, earning them a "Give with Confidence" designation. Another 345 nonprofits received a perfect 100 rating.