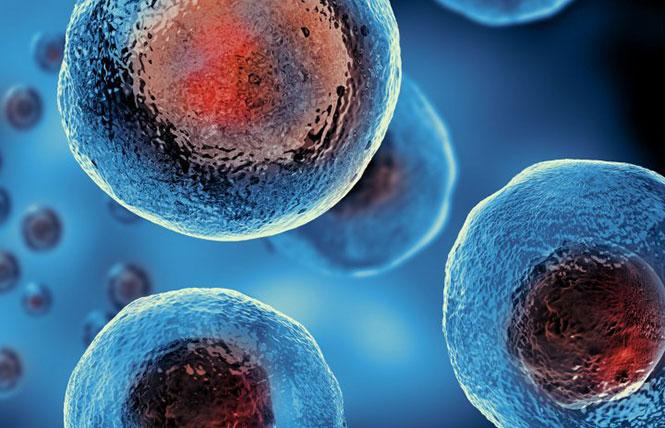 Proposition 14: Authorizes bonds to continue funding stem cell and other medical research. Initiative Statute. Yes. This measure would authorize $5.5 billion in state general obligation bonds to fund grants from the California Institute of Regenerative Medicine to educational, nonprofit, and private entities. Voters approved stem cell research in 2004, and CIRM is now near the end of allocating its first $3 billion. Continuing medical research is vital. While CIRM board member Jeff Sheehy, a gay man who's a former San Francisco supervisor, has been quoted as saying he is "troubled" by the proposal because he thinks it might oversell potential benefits of stem cell research, Robert Klein, the real estate investment banker who spearheaded the 2004 initiative, has created an accessibility and affordability working group. The state needs to continue this research. Vote YES on Prop 14.

Proposition 15: Increases funding for public schools, community colleges, and local government services by changing tax assessment of commercial and industrial property. Initiative Constitutional Amendment. Yes. This is the split-roll fix for Proposition 13, the 1978 property tax measure that has decimated state funding for schools and local services. Prop 15 will subject commercial and industrial real property to cyclical reassessments to market value while retaining Proposition 13 protections for other real property (primarily residential real property), according to Tax News Update. For decades, funding for public schools and other city services have been starved because of the low property taxes enacted by Prop 13. Reassessing commercial and industrial property makes sense. It has support from Equality California and the Alice B. Toklas LGBTQ Democratic Club. Vote YES on Prop 15. 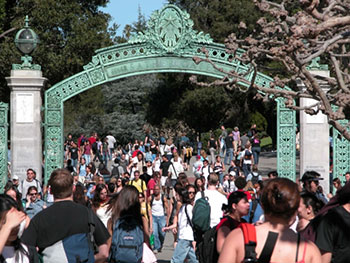 College campuses like UC Berkeley were at the center of Prop 209 in 1996, which Prop 16 would repeal. Photo: Courtesy Koret Foundation

Proposition 16: ACA 5 Repeal Proposition 209. Constitutional Amendment. Yes. The California Constitution, thanks to Prop 209 that was passed in 1996, prohibits the state from discriminating against, or granting preferential treatment to, any individual or group on the basis of race, sex, color, ethnicity, or national origin in public employment, public education, or public contracting. Effectively it bans affirmative action, which allows race-based or sex-based preferences. This especially manifests itself in higher education, as the UC and CSU systems' student body became more white when admissions officials couldn't consider race. This year, Assemblywoman Shirley Weber (D-San Diego) authored the legislation that became Prop 16. She noted that with the coronavirus pandemic and the recent tragedies resulting from police violence, Californians are forced to acknowledge deep-seated inequality. The UC Board of Regents unanimously endorsed ACA 5. Prop 209 was an unnecessary, divisive measure when it was passed; voters have a rare opportunity to right a wrong. Vote YES on Prop 16.

Proposition 17: ACA 6 Voting Rights for People on Parole. Constitutional Amendment. Yes. This would amend the state Constitution to allow Californians who have completed their prison terms to vote. The California Constitution currently prohibits convicted felons from voting while they are in prison or on parole. As a result, nearly 50,000 paroled Californians living in and contributing to their communities who have completed their prison sentences are denied the opportunity to choose their political representatives and shape the policies that impact their daily lives. Not surprisingly, this disenfranchisement disproportionately affects people of color and the poor. Supporters note that Prop 17 will clarify state law so that anyone who is not in prison can vote. Vote YES on Prop 17.

Proposition 18: ACA 4: Primary Voting for 17-year-olds. Constitutional Amendment. Yes. This would amend the state Constitution so that a U.S. citizen who is 17 years old, is a resident of the state, and will be at least 18 years of age at the time of the next general election is eligible to vote in any primary or special election that occurs before the next general election. This is an important opportunity to involve youth in the election process in order to foster civic participation throughout their lives. (A San Francisco ballot measure would allow 16- and 17-year-olds to vote in municipal elections.) Democracy is better served when more people can participate. Vote YES on Prop 18.

Prop 19 also establishes a revenue stream for wildfire agencies and counties. Wildfires have become a regular occurrence in the state, causing massive damage. This gives homeowners options and provides some funds for agencies. Vote YES on Prop 19.

Proposition 20: Restricts Parole for Non-Violent Offenders. Authorizes Felony Sentences for Certain Offenses Currently Treated Only as Misdemeanors. Initiative Statute. No. This proposition goes against the tide of proposed reforms for the criminal justice system. Prop 20 would change standards and requirements governing parole decisions; authorizes felony charges for specified theft crimes currently chargeable as misdemeanors, including some in which the value is between $250 and $950; and requires persons convicted of specified misdemeanors to submit to DNA collection for the state database. According to proponents, Prop 20 was designed to get tougher on crime after the passage of previous reform measures Props 47 and 57 and Assembly Bill 109. It also defines 51 crimes and sentence enhancements as violent in order to exclude them from the parole review program. Communities are debating reforms to policing, sentencing, and other criminal justice-related matters; this proposition will remove options that jurisdictions may want. Vote NO on Prop 20.

Proposition 21: Expands Local Governments' Authority to Enact Rent Control on Residential Property. Initiative Statute. Yes. Two years ago, state voters rejected a similar proposal. Prop 21 would allow local governments to establish rent control on residential properties over 15 years old and exempt individuals who own no more than two homes from new rent control policies. While San Francisco and Berkeley have strong rent control laws, many other cities do not. Given the eviction tsunami that is expected after moratoriums that were instituted because of COVID-19 expire, we hope that voters will decide that rent control is essential to keep people housed, especially during the pandemic. Vote YES on Prop 21.

Proposition 22: Changes Employment Classification Rules for App-Based Transportation and Delivery Drivers. Initiative Statute. No. This is an end run around California's gig-worker law, AB 5. The proposition is bankrolled by Uber, Lyft, and delivery apps, which refuse to accept that their drivers should be classified as employees, but will not apply to other sectors negatively impacted by AB 5. A legislative remedy would be preferred over a proposition, but we're not expecting one this year due to the pandemic. Vote NO on Prop 22.

Proposition 23: Authorizes State Regulation of Kidney Dialysis Clinics. Establishes Minimum Staffing and Other Requirements. Initiative Statute. No. This is different from 2018's Prop 8, which would have required dialysis clinics to issue refunds to patients above 115% of costs of direct patient care and health care improvements. This time, backers seek minimum staffing like at least one licensed physician on site during treatment at these outpatient clinics, but allows for the state to issue exemptions due to staff shortages. However, physicians claim they are often needed in multiple hospitals, dialysis centers, and clinics, and to mandate them to stay on site during treatments would be unproductive. Currently nurses and staff at dialysis clinics are trained and well-equipped to administer routine treatments and a physician can be contacted if necessary. Vote NO on Prop 23.

Proposition 24: Amends Consumer Privacy Laws. Initiative Statute. No. San Francisco real estate developer Alastair MacTaggart is bankrolling this initiative, which would create a new state agency to enforce and implement consumer privacy laws. But in 2018, the Legislature passed the California Consumer Privacy Act, giving consumers the right to find out what personal data companies are collecting, to opt out of having data collected, and to have that data scrubbed. We think there should be time to see how the new law works, and the Legislature can make fixes later if needed. That will be difficult to do if Prop 24 passes. We are also concerned that major organizations, such as the American Civil Liberties Union of California and the Consumer Federation of California, have come out against Prop 24. Vote NO on Prop 24.

Proposition 25: Referendum on Law that Replaced Money Bail with System Based on Public Safety and Flight Risk. Yes. State lawmakers approved legislation in 2018 to abolish cash bail after it was advocated by state Supreme Court Chief Justice Tani Cantil-Sakauye. The bail bonds industry immediately challenged it, which is why Prop 25 is on the ballot. A yes vote would allow the law to go into effect. A no vote would keep the cash bail system. If enacted, judges would have the ability to determine if someone should be released while awaiting trial, based on the risks they pose to themselves or others, and would be a significant improvement of the state's criminal justice system. Vote YES on Prop 25.