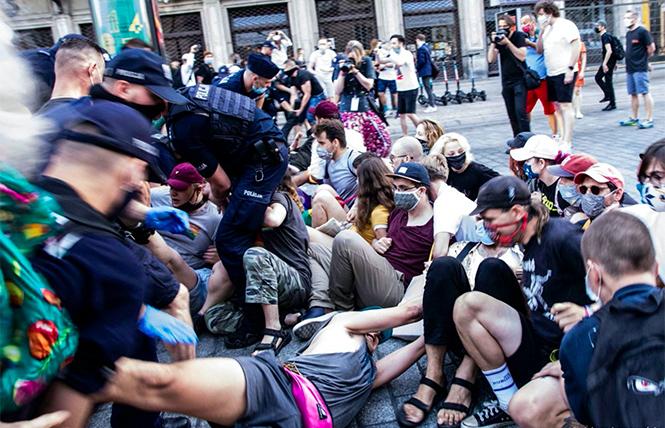 The unrest comes nearly a month after the narrow July 12 reelection of anti-LGBTQ Polish President Andrzej Duda. He was sworn in at a ceremony in parliament August 6.

During his acceptance speech, Duda reiterated his promise to protect the family, the "foundation stone of society," he said.

Since the election, more than 100 Polish cities have adopted "LGBT-free zone" resolutions, prompting the European Union to deny funding requests and Polish politicians to cry foul.

Critics of Poland's government told the Associated Press the country appears to want to follow Russia's and Hungary's lead, pointing out that the justice ministry announced it is drafting legislation that would require non-governmental organizations to declare foreign funding sources.

During Duda's swearing in ceremony, opposition parliament members stood close to him, forming a rainbow with their outfits and wearing rainbow face masks.

Outside of parliament, the members posed with rainbow and Polish flags.

Anna Maria Zukowska, a left member of parliament, told Thomson Reuters Foundation the action was a reminder to Duda that Poland's constitution guarantees "equality for all."

"We don't want a similar situation during his next term as there was during his campaign, when the president dehumanized LGBT people by denying them the right to be people," she said.

The action was met by plainclothes police officers, who initiated two waves of covert arrests of queer and ally activists.

LGBTQ gender-nonconforming activist Malgorzata "Margot" Szutowicz was among the more than 50 people detained, according to an August 8 news release from the International Lesbian, Gay, Bisexual, Trans and Intersex Association.

Szutowicz, who uses female pronouns and is a member of Stop the Nonsense, received a two-month pre-trial detention order for acts of civil disobedience involving damaging an anti-gay protester's van and pushing the protester.

IGLA-Europe stated that the order was to "prevent her from further action."

According to IGLA-Europe, during Szutowicz's arrest, she was denied a peaceful surrender to police officers with witnesses and media present. Instead, police arrested her later in an unmarked car at a different location. The police denied her access to an attorney and she was placed in a men's facility.

IGLA-Europe called the covert arrests "state harassment" and accused the Polish government of creating a "climate of fear," in the release.

Outraged by the arrests, people poured into Warsaw's streets over the weekend, clashing with police and anti-gay protesters who wedged themselves in the middle of the city's pro-LGBTQ demonstrations.

ILGA-Europe programs director Björn van Roozendaal said, "In circumstances like these, where marginalized members of society are being attacked from all sides, protest and activism are inevitable, and may even be considered provoked by the government's failure to protect their fundamental rights and disproportionate law enforcement responses.

"The LGBTI community is being denied the right to exist by the leading political party," he added. "LGBTI people in Poland live in a situation of constant, repressive pressure with no access to justice or State protection."

The Campaign Against Homophobia and IGLA-Europe called upon international authorities and states to speak out against Szutowicz's detainment, to have her pre-trial arrest warrant revoked, and to release the detained demonstrators.

Departures
The lack of protection has led to a reported mass exodus of LGBTQ Poles, who are seeking refuge in LGBTQ-friendly European countries, according to the AP.

"This time, people are not looking for better paid jobs, but they are looking for dignity and respect," Bartosz Staszewski, 29, a board member of the Lublin Pride Association, told the AP, referring to Poles' last mass exodus to other European countries for employment opportunities in 2004.

"People want to feel that they are protected by the government and not treated as an enemy," he said.

Call for EU to get tougher on Poland
For some, the E.U.'s withholding funds from Polish cities that enacted LGBT-free zones provides some hope.

"E.U. values and fundamental rights must be respected by member states and state authorities," Dalli tweeted.

An E.U. official declined to name the Polish towns affected, reported the Times.

For some, the E.U.'s actions were not enough. Some LGBTQ Polish activists called upon the E.U. to get tougher on the country.

Like Staszewski, Krakow radio technician Micha Niepielski, 57, who has taken his marriage equality case to marry his partner of 16 years to the European Court of Human Rights, has chosen to stay despite the couple being "very afraid," he told the AP.

The governor's office this week published an amended Domestic Partnership Bill, 2020, along with 11 other amended bills related to the domestic partnership bill, for public opinion.

Caymanians have until August 31 to respond to the amended bill under the country's constitution.

Last month, after days of hearings, the assembly rejected the DP bill, knowing that it could be overruled by the United Kingdom.

"As governor, this is not a position I would ever have wanted to be in," Roper said last week, announcing his intentions to override lawmakers.

Roper said he has respected the island's handling of domestic matters until now.

The amendments
Roper made some minor changes to the bill, adopting some issues raised prior to and during the Legislative Assembly's debate last month, such as ensuring the partnerships are authentic, along with some administrative edits.

The bill will provide Caymanian status, permanent residence, and Residency and Employment Rights Certificates to domestic partners of Caymanians, reported the Cayman Compass.

The bill protects the "current definition of marriage," which recognizes only marriage between a man and a woman, in the Cayman Islands Constitution, Roper said.

To comment on the bill, email remarks to governorsoffice.cayman@fco.gov.uk by August 31.