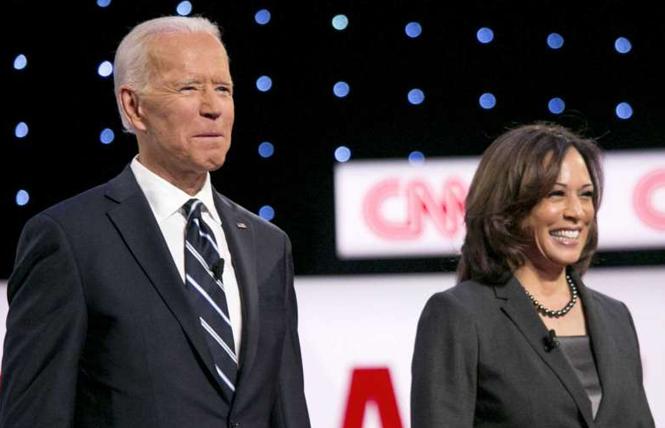 If elected, Harris would be the first female vice president and the highest-ranking woman elected in U.S. history. If elected, Biden, 77, will be the oldest person elected to the presidency.

She is the first Black woman on a major party ticket.

LGBTQ advocates were quick to praise the decision.

Gay San Francisco community college board vice president Tom Temprano enthusiastically posted on Facebook, "Vice-President Harris, here we come. Let's get a woman of color from the Bay Area into the White House."

Noting that Harris in 2013 had officiated the first marriage between a same-sex couple in the state of California between Proposition 8 plaintiffs and Berkeley couple Kris Perry and Sandy Stier, the national LGBTQ rights organization the Human Rights Campaign hailed her selection as Biden's running mate.

"Senator Kamala Harris is nothing short of an exceptional choice for Vice President," stated HRC President Alphonso David. "Throughout her groundbreaking career, Senator Harris has been an outspoken advocate for the LGBTQ community, standing with us when many, even sometimes those within her own party, did not. As a presidential candidate, Harris spoke with deep understanding of and empathy for the issues our community faces. It's clear the Biden-Harris ticket marks our nation's most pro-equality ticket in history. Now it's time to come together, unite like never before, and turn the page on the Trump-Pence brand of lies and hate."

"Senator Kamala Harris is an exceptional choice to serve as the next vice president of the United States, and Equality California is proud to stand with her and Vice President Biden in their historic campaign to take back the White House and restore the soul of America, Zbur stated. "Throughout her career, Senator Harris has demonstrated an unwavering commitment to civil rights and social justice for all LGBTQ+ people. As vice president, we are confident she will continue Vice President Biden's tradition of using the office to champion and advance full, lived LGBTQ+ equality — and equality for the diverse communities to which LGBTQ+ people belong."

"Senator Kamala Harris has been an incredible leader and inspiration for so many of us, and I'm proud to call her a friend and a mentor," Breed wrote on Facebook. "I'm thrilled that Vice President Biden had the vision to recognize that Senator Harris can bring the integrity, intelligence, and commitment to justice for all that our country so badly needs during this difficult time.

"I know how much it means to have leaders who reflect the people they represent, and today," the mayor added. "I'm thinking about all those little girls in this country that will see a strong, principled woman walk into the White House and know that they too can make that same journey some day."

Biden committed to picking a woman as his running mate March 15 after running against several in the Democratic presidential primaries including Harris.

Before becoming the presumptive presidential nominee, Biden was a two-term vice president under Barack Obama.

Harris, 55, was elected to the U.S. Senate in 2016 after serving as California attorney general and San Francisco district attorney. She is a native of Oakland.

Her prosecutorial style in congressional hearings and on the Democratic presidential debate stage earned her national notoriety — particularly during the confirmation hearings for Supreme Court Justice Brett Kavanaugh in 2018.

Harris left the presidential primary race in December 2019, before a single vote was cast, but not before landing blows against Biden for his cordial words regarding southern Democratic senators who had supported racial segregation and his 1970s opposition to busing.

"You also worked with them to oppose busing. There was a little girl in California who was part of the second class to integrate her public schools and she was bused to school every day," Harris said. "That little girl was me."