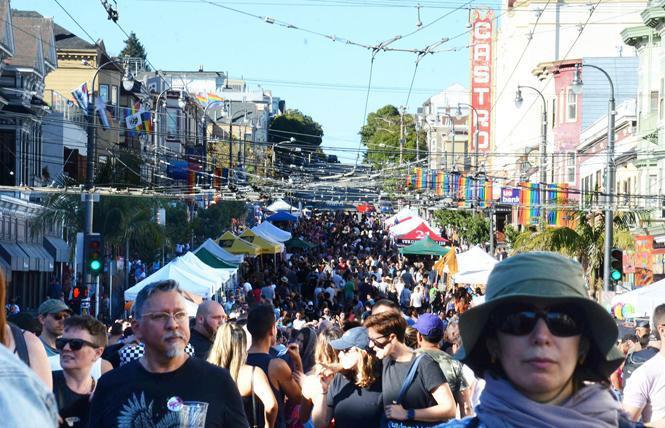 The Castro Street Fair will not take place in person this year due to COVID-19, according to remarks made by Fred Lopez, a member of the fair's board of directors, at an August 6 virtual meeting of the Castro Merchants association.

Jenn Meyer, president of the fair board of directors, wrote in an August 9 email to the Bay Area Reporter that more information would be announced Thursday, August 13.

As the B.A.R. noted in an online article August 6, the fair would have been held October 4.

As the B.A.R. previously reported, last year's Castro Street Fair expanded to Market Street for the first time in several years. It has taken place in person every year since 1974, when it was founded by Harvey Milk, several years before he went on to become the first gay person elected to office in San Francisco and California when he won a seat on the Board of Supervisors in 1977. He and former mayor George Moscone were assassinated in 1978.

B.A.R. joins state news group
The B.A.R. was one of several newspapers approved for membership in the California News Publishers Association, the organization's board announced August 4.

Joining CNPA will enable the B.A.R. to join with fellow publishers as it seeks to navigate the troubled times in the industry that were exacerbated by the novel coronavirus pandemic this spring. The B.A.R., which covers the LGBTQ community, is published weekly and has seen significant declines in advertising due to the economic fallout from the virus.

"I was warmly welcomed by CNPA. Reinvigorated by new leadership, CNPA is committed to supporting news publishers during these challenging times," Yamashita stated. "CNPA has made outreach to local news outlets a priority and membership has increased despite the coronavirus shutdown."

The CNPA board also approved several other papers for membership. They are the Fresno Flyer (monthly), Santa Paula Times (weekly), and the South Pasadenan News (weekly).

Online Alzheimer's study seeks volunteers
Researchers at UCSF are looking for participants age 50 and older with no memory loss to take part in the Alzheimer Prevention Trials, or APT, webstudy.

The APT is a first-of-its-kind online study that detects if people experience memory loss over time and need early intervention, and matches them with the right Alzheimer's study, as quickly as possible.

According to a news release, 14% of Californians, more than 5.6 million people, are 65 and older, making the state one of the "grayest" in the nation. Consequently, it has one of the largest populations of people with Alzheimer's disease — a projected 690,000. That number is expected to increase by 21% to 840,000 in the next five years.

Volunteers take no-cost memory tests online every three months to monitor memory changes over time. If changes are observed, volunteers may be invited to an in-person evaluation to determine eligibility for additional Alzheimer's studies.

To learn more and enroll, go to http://www.aptwebstudy.org

Covered CA extends period to apply
Covered California has announced that it is giving consumers until the end of August to sign up for health care coverage due to the novel coronavirus pandemic.

The state's health insurance marketplace initially responded to COVID-19 by opening the exchange to any eligible uninsured individuals from March 20 to June 30. It then extended the deadline to July 31, before the latest move to August 31.

"We are all doing our part in this health crisis, by wearing masks and practicing social distancing, and Covered California is committed to helping people access the health care they need," Covered California Executive Director Peter V. Lee, a gay man, stated.

The most recent data shows that 231,040 people have signed up through Covered California between March 20 and July 25, which was more than twice the number who did so during the same time last year.

Overall, 298,600 people have signed up for coverage since January 31, when Covered California ended its open-enrollment period, through July 25.

The latest data from California's Employment Development Department shows that 8.7 million unemployment claims have been processed in the state since the pandemic started. People who sign up through Covered California will have access to private health insurance with monthly premiums that may be lowered due to federal and new state financial help that became effective in 2020. After selecting a plan, coverage begins on the first day of the following month, meaning individuals losing job-based coverage would not face a gap in that coverage.

For more information, go to http://www.coveredca.com