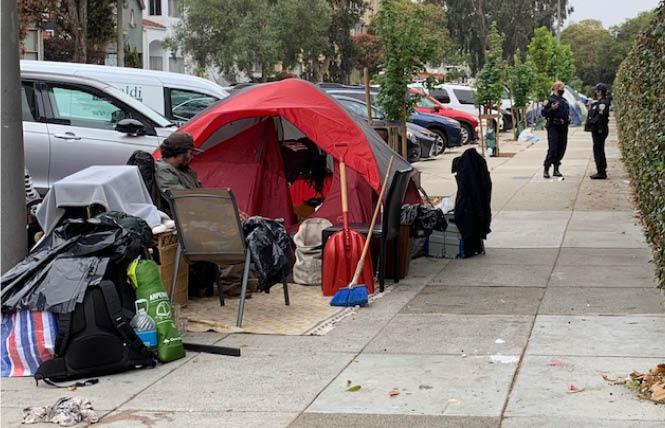 Police began arriving at the encampment at 7 a.m., followed by staff from San Francisco Public Works, among others.

The action by the city was announced Monday, August 10, by Jeff Kositsky, healthy street operations manager, at the virtual meeting of the Duboce Triangle Neighborhood Association. Speaking by phone, Kositsky told DTNA members that the encampment would be gone "by the end of the week."

The several dozen people at the camp would all be offered alternative space, including shelters, he said. Kositsky predicted that 90% of the Duboce campers would accept the city's offer of help, based on experience clearing other encampments around the city. The remaining people would be told they could not stay on Noe Street. Follow-up to be sure people don't return to the location would be handled by police and city workers, Kositsky said.

Kositsky arrived at the encampment about 8 a.m. August 11.

The announcement, kept under wraps by city officials until Monday night, was greeted with enthusiasm by DTNA board President Kimyn Braithwaite, who said that the questions prepared for Kositsky about city progress in dealing with the encampment could be scrubbed, since the solution seemed imminent.

Kositsky promised DTNA that the encampments on 16th Street, between Dolores and Market streets, would be cleared by the end of September. The city has prioritized all of the larger encampments, which include any with six or more tents, for removal. The 16th Street encampments are 19th on the list, with the city hoping to do two or three a week.

Acting SFPD Lieutenant Kathrine Holder told the BAR in a brief interview at the Noe Street encampment that the action would probably take several hours to complete.

Police had started talking to the campers as this reporter left.