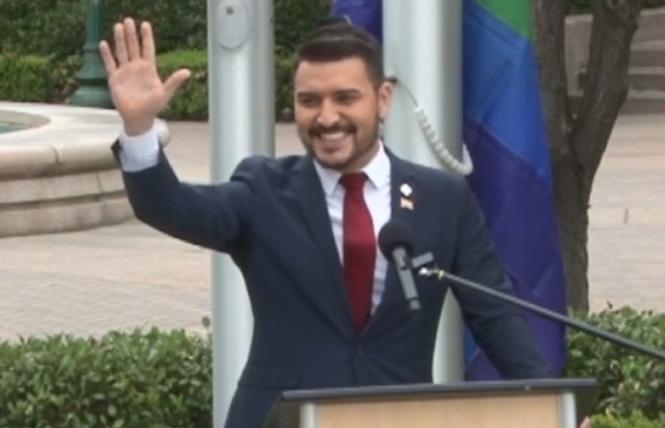 Last summer, gay Tracy City Councilman Dan Tavares Arriola was recuperating from being hit by a car in downtown Stockton after attending an LGBTQ event where he was an invited speaker.

A year later, having fully recovered, Arriola is running for his city's open mayor seat, as the incumbent is termed out of office. Should he be elected, Arriola would be the first LGBTQ mayor and first mayor of color.

"In the city of Tracy we've had a history of challenging history, and I think that given the political climate it is time to address so many issues we have not talked about before," said Arriola, 30, who works as a deputy district attorney for the San Joaquin County District Attorney's office. "When I looked at the candidates that were running, I didn't see the type of leadership I wanted for my city."

"I am hoping for a really good 31st birthday present," he told the Bay Area Reporter.

His decision to run for mayor of the Central Valley city adjacent to the Bay Area is hardly surprising. He had told the B.A.R. last year that he was keeping his "options open" when asked about seeking the position.

As of Wednesday morning, two women of color had also pulled papers to run for mayor: termed out Tracy Councilwoman Nancy Young, who is Black, and former Tracy planning commissioner and business owner Jass Sangha, who grew up in Mumbai, India. The filing deadline for the race is Friday, August 7, and several other local leaders are expected to enter the contest.

Gay Emeryville City Councilman John Bauters, who has served as his city's mayor as the position is rotated among the council members, has known Arriola for three years and is endorsing his mayoral bid.

"His candidacy shows that LGBTQ candidates are not only successful here in the East Bay but also successful in the Central Valley," said Bauters, who is running for reelection this fall. "It is exciting we can get someone with progressive values like his as a serious contender in a mayoral race in a city like Tracy."

Born in San Jose to a white mother and Latino father, his parents divorced after Arriola was born, and his mother moved them briefly to Portugal. When he was 3 years old, they returned to Northern California and settled in Tracy where his father was living. His parents remarried and had a second son, now age 24, but divorced again last year.

After leaving to attend college at UCLA, where he was the political science valedictorian in 2011, and then USC law school, Arriola moved back in 2014. Single, he continues to rent an apartment, as "the cost of housing is astronomical here," he said.

Arriola's campaign slogan of "a new generation of leadership" may ring familiar, as gay former South Bend, Indiana mayor Pete Buttigieg used it for his bid to be the Democratic Party's presidential nominee this year. But Arriola noted he has been using the phrase since 2016 when he mounted his first bid for public office, winning a seat on his local school board.

Two years later Arriola was elected to the City Council as its first LGBTQ member. In 2019 his request that the city fly the rainbow flag for one day in June in honor of Pride Month was approved, and this year it flew for the entire month.

"We also had a proclamation recognizing the LGBTQ community in our city, something I thought I would never see," said Arriola. "Growing up here, there was a lot of disdain for our community."

While last year's vote to fly the Pride flag for a day in honor of the 50th anniversary of the Stonewall uprising was a unanimous 5-0 decision, this year's vote to fly it for the whole month was 4-1. Afterward the council voted to ban the raising of "any flag" for a month, which Arriola objected to since it only impacted the flying of the Pride flag, and in late July the council rescinded the policy.

"So just that tells me there are still issues with people's perceptions of the LGBTQ community in my city," Arriola told the B.A.R.

During his school board race four years ago, Arriola was outed just days prior to the election by a local blogger who posted photos of Arriola at Los Angeles Pride under a headline asking how he could "represent Tracy family values." He won by more than 2,000 votes, which Arriola said was "a bit of a landslide" victory in the city.

"I think that Tracy has always had this historic idea it was a very small town. I am not sure that reflects the current reality today," he said. "As we have grown as a city we need to be really thinking about how our policies grow alongside that. The demographics of the city have changed substantially since I was a kid. We are a minority-majority city, as there are more Latino than white residents."

Having already won two citywide elections, Arriola's sexual orientation doesn't seem to be an issue with a majority of Tracy voters. The mayoral race is likely to be determined more on where he and the other candidates stand on various issues, like housing and transportation. Arriola is a proponent of transit-oriented housing development in the city's downtown near where new rail connections are planned to better connect residents to jobs in the Bay Area and Sacramento.

On the council Arriola has pushed a number of progressive proposals, from police reforms and renewable energy to addressing equity concerns, to mixed results. By April 2021 the entire city of roughly 100,000 people will be switched over to East Bay Community Energy, a public renewable energy provider. Although the equity and empowerment initiative he co-sponsored with another council member didn't garner enough votes to pass, the council did instruct city staff to conduct a feasibility study on it.

"It called for the creation of a government accountability commission so that the community themselves could hold officers and elected public officials accountable for their actions, as well as take a historical look at some of the policies in the past and to really re-evaluate to see if they are the most equitable policies we could make for our city," explained Arriola.

As the youngest person to serve on his city council, Arriola told the B.A.R. he is ready to bring a new perspective to the mayor's office.

"As our demographics continue to shift in Tracy, as its mostly people moving from the Bay Area here, the vision and the needs of our community are shifting to be more progressive," he said. "As that shifts, our leadership needs to be at the forefront of that."