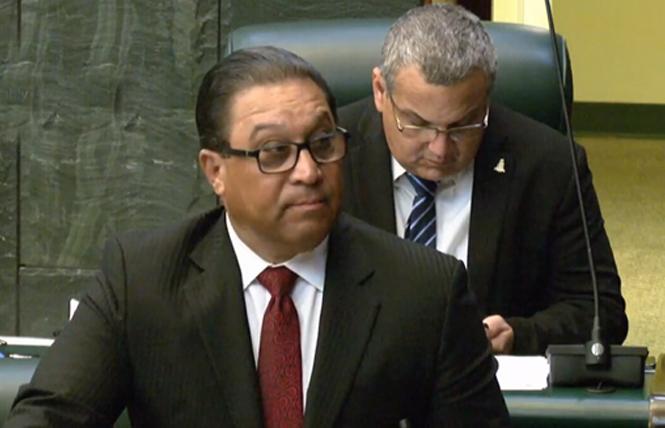 The 9-8 vote July 29 came after three days of heated debate among members of the Legislative Assembly.

Currently, same-sex marriage is illegal in the Cayman Islands. In November 2019, an appeals court struck down a lower court ruling that legalized marriage equality on the Caribbean islands. The court also ordered the Legislative Assembly to legally protect same-sex couples' relationships immediately.

Premier Alden M. McLaughlin Jr. and some other lawmakers urged legislators to vote for the domestic partnership bill, warning that if they didn't then the United Kingdom would decide the fate of same-sex relationships for the Cayman Islands.

McLaughlin noted the global movement toward same-sex marriage made it inevitable if they didn't act now.

McLaughlin introduced the bill, telling lawmakers the question before the assembly wasn't same-sex marriage, it was domestic partnership, which he repeated several times throughout his argument. He added the bill was also about the Cayman Islands upholding the rule of law and maintaining autonomy as a sovereign territory.

"It is that failure we are trying to rectify today," he said, referring to Bodden Bush and Day, who sued to have their relationship recognized.

Bodden Bush and Day's case was appealed all the way to the Judicial Committee of the Privy Council, the highest court for British Overseas Territories, in London earlier this year.

McLaughlin said the Court of Appeal mandated to the Assembly that Bodden Bush and Day "do not have a right to marry in the Cayman Islands, but they do have a right to family life." He argued that "as such, a legal framework that gives them the same legal recognition and security, but one that is not a marriage."

Addressing some legislatures' calls for a referendum on the issue in the general election, McLaughlin said, "This is not a policy decision; this is a matter of law, a constitutional matter."

The debate came more than seven months after the appeal court's order to urgently draft legislation to address the legal gap with same-sex relationships.

The bill was delayed due to the global coronavirus pandemic, McLaughlin said.

Some lawmakers accused the government of not providing enough time for the public to comment on the proposed legislation.

"The government action in this case today indicates to me that they had no intention of taking consultation, seeking input, accepting input and changing the intended course of action, none," opposition leader Arden McLean argued.

Lawmakers speaking out in support and against the bill expressed their constituents' and their personal opinions about same-sex marriage. Discussing the elements of the bill they separated themselves from their private opinions and focused on the issue.

Faced with the possibility of the U.K. deciding the legality of same-sex relationships for the island territory, the lawmakers leaned toward reason. Some lawmakers said they felt same-sex marriage was inevitable in the face of these forces, and passing a domestic partnership bill was the best alternative.

Some lawmakers expressed their concerns and reservations about some of the legal aspects of the legislation addressing age limits, bureaucratic obstacles, and privacy regarding a separate database.

Assembly member Ezzard Miller said he had "some fears" that the registry "could lead to abuse," stating that he preferred the database to operate like the marriage registry.

Despite these issues, some lawmakers called it a well-balanced bill between religious beliefs and personal choice and urged their colleagues to vote in favor of it.

LGBTQ advocates also approved of the bill in its current form, despite it falling "short in a small but significant number of very important legal aspects," Colours Cayman wrote in a statement July 23.

Billie Bryan, the founder and president of Colours Cayman, and legal counsel Leonardo Raznovich raised some of the community's issues with the bill with the premier July 23.

Bryan, a transgender woman, and Raznovich, a gay man, left the meeting satisfied that some of the revisions they suggested would be in the version of the bill introduced to the Assembly, they wrote in the statement following the meeting.

Despite the bill's flaws, it "goes a long way toward complying with the court of appeal requirement for a legal framework functionally equivalent to marriage," they wrote.

The activists vowed not to stop fighting for full marriage equality.

McLaughlin argued before House Speaker McKeeva Bush and the Assembly to leave same-sex marriage to the next generation of lawmakers.

"The next generation of legislators will legislate for same-sex marriage," he said. "They have a very different outlook than our generation and the one that has gone before us, so let us leave it for them to decide."

Opponents to the bill weren't deterred by the argument of Britain gaining more legal control over the territory.

Eden has been criticized for what some called "hate speech."

The lesbian couple spent four years in exile with their young daughter.

The two women were inspired to fight for their rights by Raznovich's own legal win against the island's government to be a dependent on his husband's workpapers in 2016, reported the Cayman Compass.

The couple returned to the Cayman Islands and sued the government.

In 2019, the Cayman Islands' Grand Court Chief Justice Anthony Smellie believed that the couple had suffered an "indignity" and legalized same-sex marriage on the island in his ruling.

The victory was brief as the law was overturned by the appeal court, which punted the issue back to the Assembly.

The court stated that Bodden Bush and Day and couples like them were "entitled, expeditiously, to legal protection in the Cayman Islands, which is functionally equivalent to marriage."

If the Assembly didn't, it would be a "continuing violation" of Article 8 of the European Convention on Human Rights, according to a release from the couple responding to the government's publication of the Domestic Partnership Bill 2020 in June.

Day told the Cayman Compass that her case had to do with "human rights and equality," not religion.

"I'm entitled to civil liberties as a Caymanian to marry and to have a child and to have a loving relationship legally recognized — the same way it's recognized for heterosexual couples in this community," she said. "That's what this case is about."

U.K. may decide
Bermuda and the Cayman Islands both have struggled with same-sex marriage between the islands' respective courts, Assemblies, and the U.K. within recent years.

Bermuda, also a British Overseas Territory, has its own case to be reviewed by the U.K. Privy Council.

That wasn't the end of the battle. The Bermuda government took the issue to London in one last effort to ban same-sex marriage. It's unknown when the Privy Council will announce a decision.

The Cayman Islands' case is anticipated to be heard in January, reported the Cayman Compass.

The council's decision will have a significant impact in the Caribbean.

England and Wales passed marriage equality in 2013 and that took effect in 2014. Scotland followed suit in 2014. Northern Ireland was the holdout in the U.K., and only legalized same-sex marriage at the beginning of this year.

The Privy Council's decision in these two cases could set a precedent for four other British territories in the Caribbean — Anguilla, British Virgin Islands, Montserrat, and Turks and Caicos Islands. Same-sex marriage currently isn't legal on these islands.

Fia'ailetoa Ken Moala and Vanessa Lee, Ph.D., of the Yupungathi and Meriam people will co-convene ILGA Oceania for the first time in the organization's nearly 50-year history, reported the Star Observer.

Lee called her appointment to co-convene ILGA Oceania a "game-changer for communities."

"It's a step toward our voices getting heard on a world level," Lee told the newspaper about being able to address the United Nations. "It's about a strength-based approach, as we are a minority voice."