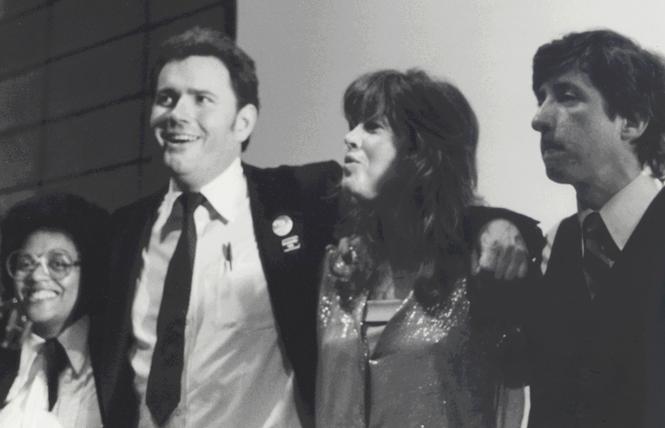 I had known Harry Britt since 1977, when he was president of the Harvey Milk LGBTQ Democratic Club (then the San Francisco Gay Democratic Club). After attending on and off for about a year, Britt finally recruited me to join the club. He was the second president of SF Gay, as it was referred to, following founding President Chris Perry.

So much of San Francisco's gay history was bubbling to the surface during this time. While the Alice B. Toklas Democratic Club (now the Alice B. Toklas LGBT Democratic Club) was already well-established and known by political insiders to be a club of lesbians, gay men, and their straight allies, SF Gay's claim to fame was that it was the first Democratic club to have the word "gay" in its name. This was in 1976 when the gay community not yet evolved to embrace bisexual or transgender members of our rainbow, and lesbians fought for visibility, leadership, and representation equal to gay men. Some out-and-proud lesbians and gay men viewed the Alice club as semi-closeted because recognition that it was a gay club depended on knowledge that Alice B. Toklas and Gertrude Stein maintained a closeted long-term relationship.

Britt gave numerous speeches about the necessity of the club to be highly engaged and visible because the word "gay" in our name forced straight politicians to acknowledge us for who we were. Britt was as much an evangelist for being out and authentic in our politics as Harvey Milk. I have no doubt that this is why Britt was one of Milk's top choices to succeed him in the event of his untimely death.

In the subsequent decades, Bill Kraus and I worked closely with Britt on numerous issues, including the No on 6/Stop Briggs campaign (that would have banned gays from being teachers), the aftermath of Milk's 1978 assassination, strategic organizing to have Britt appointed as Milk's successor to the San Francisco Board of Supervisors, the political response to the Dan White verdict (White had assassinated Milk and then-mayor George Moscone), the resulting White Night riots and Elephant Walk bar beatings, the fight for domestic partners rights legislation, and much more.

Britt, Kraus, and I were delegates to the 1980 Democratic National Convention in New York City, and worked with the Ted Kennedy campaign and with Kennedy himself to bring greater visibility and support for the LGBT community and agenda. Kraus went on to become an aide to Congressman Phil Burton (D-San Francisco), one of the most powerful members of the House of Representatives. His work resulted in significant and influential legislation, most notably funding for HIV/AIDS. Sadly, Kraus succumbed to that very epidemic himself in January 1986. Britt felt Kraus' loss very deeply.

As a supervisor, Britt led several important issues, particularly on rent control and tenants' rights. As an avowed democratic socialist, his eloquent speeches often included issues of economic equity and multiracial equality. Britt recognized he had a position of national spokesperson for the LGBTQ movement, and used the opportunity to promote a progressive vision that rose in partnership with movements to empower people of color, Indigenous people, women, economically and physically disadvantaged people, and other oppressed people everywhere.

Prior to coming to San Francisco and coming out as gay, Britt had been a minister in Texas. As a result, he could preach. His speech at the Milk club's first dinner in 1980 was particularly memorable — a real barn burner! It was a great night to show his stuff. Despite being a young club, we'd attracted a smorgasbord of local and state leaders, with Tom Hayden and Jane Fonda as guests of honor. (An often forgotten footnote: also on the program as a featured speaker, due to Kraus' inspiration and insistence, was Cesar Chavez.) Hayden and Fonda were so impressed with Britt's eloquence and passion. Not surprisingly, Britt became a leading ally of Hayden's organization Campaign for Economic Democracy, and Fonda and Hayden returned to campaign in the Castro for Britt's reelection to the Board of Supervisors.

Britt's great talent as a supervisor was as a coalition builder, continuing the path that Milk had walked in his short time in San Francisco's political life. Britt built relationships with community leaders rather than with power brokers. In doing so, he was essential to keeping the board's progressive majority intact. While he eventually retired from the board, he never retired from speaking on the movement for full rights for LGBTQ people. Britt passed away June 24 at the age of 82. His voice will be greatly missed.