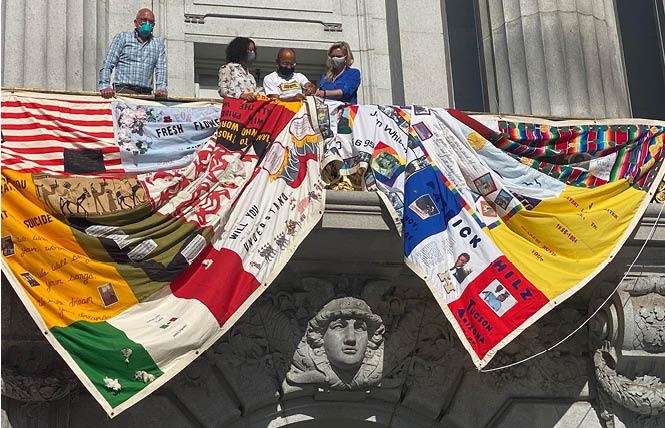 John Cunningham, a gay man who is the executive director of the AIDS grove, said in a Tuesday morning Zoom news conference that the lessons the quilt teaches apply very much to the present health crisis.

"The most profound one is to ensure we stand up and take action to hold our elected officials accountable for their inaction and for stigmatizing a virus," Cunningham said, referring to the widely-criticized federal response to the COVID-19 outbreak, which has killed over 130,000 Americans as of press time.

Cleve Jones, a longtime gay activist who came up with the initial idea for the quilt in 1985, echoed that sentiment.

"The quilt was never intended to be a passive memorial," Jones said. "It was about shaming a government for its inaction. ... Today, as we see people hoping for a vaccine, hoping for a cure, it brings back a lot of painful memories. But these are the memories we need in the front of our minds right now as we face this new challenge."

Quilt lessons
Cunningham also noted the quilt has lessons for this time of demonstration, being a tool of protest itself.

"That's part of what's in the fabric of our nation — challenging the bases of power to bring about profound change in our society," Cunningham said.

The virtual quilt is currently searchable by both name and quilt block number, according to Anne Balsamo of AIDS Quilt Touch, but there are still kinks to be worked out.

"The search capacity is still really crude," Balsamo said. "Many panels are dedicated to Ryan White, but you'll see it also returns the name Bryan White."

Balsamo added that she hopes for more search options in the future.

"People want to know where their quilt has traveled so that's another search option we'd like to add," Balsamo said. "Year of birth, year of death, city of significance."

Balsamo said that hopefully people will be able to see where each panel has traveled to as part of a display at a school or other institution. Jones said he wants to know where the first panel he made — to honor his friend Marvin Feldman — has visited.

"Marvin's quilt has traveled so far," Jones said, adding that on a trip to Cuba last year it was poignant to see panels honoring the dead on the island, and quilts honoring Cuban Americans, brought together in a ceremony.

"It was just such a moving experience to see the quilts united," Jones said.

Cunningham said information about who made each quilt is available on paper cards that have to be digitized. There are some "200,000 archival documents that came with the quilt: letters, birth certificates, death certificates," he added, and these will be digitized and catalogued in partnership with the Library of Congress.

"That's the power of the future," Cunningham said. "That is helping it stay alive and that is telling the story."

In addition to the virtual quilt, the grove website features an accompanying webpage called 2020/40, which features 21 faces of HIV/AIDS from the beginning of the epidemic through today.

Viewers of the website can click on the faces to read or see a video about that person's HIV/AIDS experience. Individuals featured include gay San Francisco Chronicle reporter and author Randy Shilts; Pedro Zamora, the 22-year-old Cuban American whose struggle with the disease was fractured on MTV's "The Real World: San Francisco;" the disco star Sylvester; and Jones.

"Each week these stories will be refreshed. We'll add new stories and people can come back," said Kevin Herglotz, a public affairs specialist who led a tour of the website. "There are plenty of stories of AIDS to tell."

Cunningham said he was thankful that the movement of the quilt to the Bay Area was completed in February, just weeks before the beginning of the shelter-in-place orders due to the COVID-19 outbreak.

There were plans for a display of the quilt in April at Golden Gate Park — which would have been "the largest display in San Francisco history, equal in size to the first display" — but these could not be executed due to the pandemic.

"At the present time the quilt is going out on a limited basis," Cunningham said. "We are still available for individuals and groups to view it."

Jones said that the quilt was a way for people to enter the movement against HIV/AIDS — his grandmothers, he said, "were not going to put on a black leather bomber jacket and get arrested at the FDA," like ACT UP activists, many of whom were also involved in making quilt panels.

Some of the funding for the grove and for this project came from Chevron, which was represented in the Zoom meeting by Dr. Huma Abbasi, who serves as the chief medical officer for the oil and gas company.

Chevron has provided $250,000 to the Surviving Voices storytelling project, and has donated another $140,000 in support of World AIDS Day since 2016, according to Herglotz.

Abbasi said that some employees at Chevron have taken the initiative on creating quilts, such as a celebratory quilt when individuals who were HIV-positive became able to give birth to children who are HIV-negative. Abbasi said Chevron, which is headquartered in San Ramon in Contra Costa County, has been involved in HIV/AIDS issues for over 30 years.

Cunningham said that first and foremost the quilt is about stories.

"We are the keepers of the stories, but by no means do we have all the stories," Cunningham said. "Help us keep the stories alive."

About 700,000 Americans have died of AIDS in the past 40 years. About 1.1 million Americans are living with HIV.