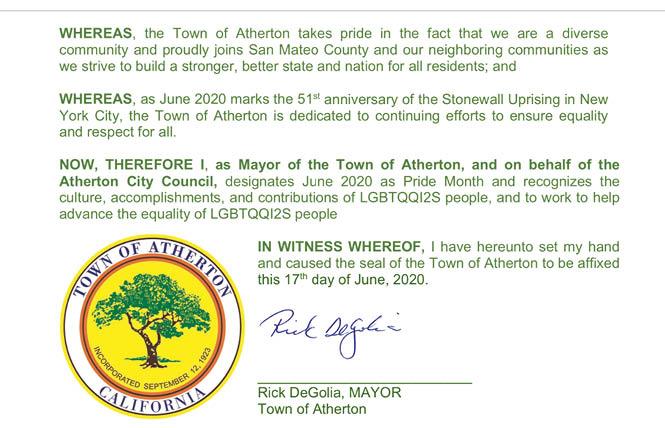 With Atherton the final city on the Peninsula to declare June as Pride Month, all 20 cities and towns in San Mateo County have for the first time observed the annual celebration. And more than half of the municipalities this month are flying the rainbow flag, the global symbol of the LGBTQ community.

The countywide Pride Month observance is the culmination of months of work by the members of the San Mateo County LGBTQ Commission and Peninsula residents and leaders who urged their city councils to sign on to the Pride Visibility Campaign. Due to the novel coronavirus outbreak resulting in the cancellation of in-person Pride events this month, replaced with virtual gatherings, LGBTQ advocates argued it was even more important for the individual municipalities to signal their support and embrace of their LGBT residents and employees.

While the LGBTQ community is "a community of resilience," noted Loyola, they added, "these symbolic acts of visibility are important."

Tuesday night Menlo Park's city council was the second-to-last to declare June as Pride Month. The city is also flying the rainbow flag in its Civic Center area on a flagpole adjacent to a small lake.

Rounding out the list to recognize Pride Month was Atherton, whose mayor issued the Pride Month proclamation at the start of his council's June 17 meeting Wednesday night. In presenting it to LGBTQ Commissioner Lelan Anders, Mayor Rick DeGolia noted he was doing so two days after the U.S. Supreme Court issued its landmark 6-3 ruling that prohibits employees from being fired solely based on their sexual orientation or gender identity.

"I am happy the Supreme Court ruled this month. I think it is great progress," said DeGolia. "It is a terrific Pride Month."

Anders, 55, who lives in Belmont, was appointed to the LGBTQ commission in January. They explained that having the cities and towns recognize Pride Month lets their local LGBT community members know "they are seen" as well as "important."

"By issuing this proclamation, Atherton is demonstrating how important it is for youth and those struggling to come out, like I once did, to celebrate Pride Month," said Anders, who came out as queer and nonbinary at the age of 51.

The rest of the county's cities and towns issued their first Pride Month proclamations this year. In addition to Atherton and East Palo Alto, they included Burlingame, Hillsborough, Millbrae, Pacifica, Portola Valley, and Woodside.

Contra Costa County
Next week, Contra Costa County LGBTQ advocates are also expected to achieve their goal of having all 19 cities and towns in the East Bay jurisdiction mark Pride Month in some manner for the first time. Brentwood and Oakley are set to issue Pride proclamations Tuesday, June 23, and Moraga will follow suit June 24.

In previous years Clayton and Danville were the Pride holdouts in the county that sprawls from the bay out to the Delta and northern flanks of Mt. Diablo. This year Clayton was not only one of the first to issue a Pride proclamation, its City Council also agreed to fly the rainbow flag in various downtown locations. The Danville City Council, meanwhile, issued a Pride Month proclamation in early June but initially ignored requests that it also fly the Pride flag.

This week, the council voted Tuesday night to become the 15th city to agree to raise a rainbow flag. The next morning the Philly Pride flag went up at the Danville Town Green at the request of LGBTQ advocates.

Thursday morning San Ramon followed suit to become the 16th city in Contra Costa County to fly the rainbow flag. It also hoisted the version known as the Philly Pride Flag, as it was first flown by the city of Philadelphia in June 2017. It includes black and brown stripes at the top of the flag in addition to the standard six colors of the rainbow.

San Pablo also raised a rainbow flag this week after its city council also held a contentious hearing Monday night about doing so that resulted in a 3-2 vote to fly it. The other cities flying rainbow flags in the county are Antioch, Concord, El Cerrito, Hercules, Lafayette, Martinez, Orinda, Pinole, Pittsburg, Pleasant Hill, Richmond, and Walnut Creek.

Updated, 6/19/20: with the news that Danville also raised the Philly Pride flag and that Millbrae is flying the rainbow flag.