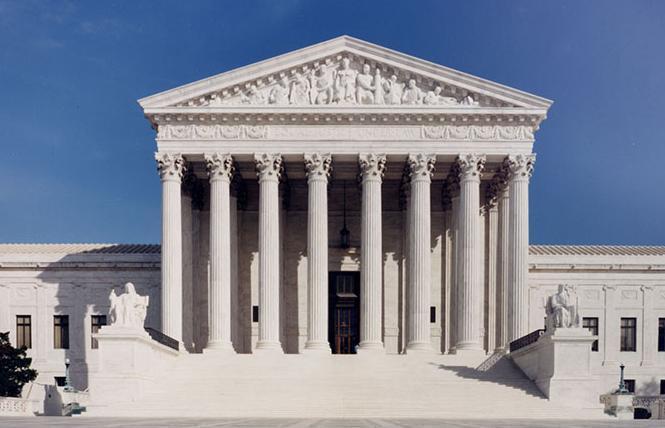 The U.S. Supreme Court, in a 5-4 decision, blocked the Trump administration from ending DACA.

The U.S. Supreme Court on Thursday in a 5-4 ruling
blocked the Trump administration from ending a program that allows young undocumented immigrants to remain in the U.S. and obtain work permits.

More than 600,000 immigrants have benefitted from the Deferred Action for Childhood Arrivals program since the Obama administration enacted it in 2012. The Williams Institute at the UCLA School of Law notes this figure includes 39,000 LGBTQ "Dreamers."

The Trump administration in 2017 announced it would end the Obama-era program, but this effort was challenged in court.

"Undocumented LGBT young adults are a particularly vulnerable population," said Williams Institute research director Kerith J. Conron in a statement. "DACA helps many of them to get an education, find employment, and support themselves and their families while contributing to the U.S. economy."

Santa Clara County Counsel James R. Williams hailed the decision a significant victory for the California county. It sued the Trump administration in 2017 over its attempt to repeal the DACA program.

"Today's Supreme Court decision is a victory for all Americans and a repudiation of the Trump Administration's heartless, anti-immigrant policies," stated Williams. "We challenged the DACA repeal to vindicate the rights of hardworking young immigrants to pursue their dreams and contribute to the only country they have ever called home—including, now, in critical roles as frontline workers in the fight against COVID-19. Under today's decision, these hardworking young immigrants, including thousands of Santa Clara County residents, can continue to live, study, and work without fear."

San Francisco City Attorney Dennis Herrera called the ruling "a victory for the American dream." The city was part of a coalition of local governments that filed a friend-of-the-court brief, also known as an amicus brief, in the case.

"DACA recipients came to this country as children through no fault of their own, and they have gone on to enroll in colleges, start businesses, and buy homes. They are our neighbors, our colleagues, our friends," stated Herrera. "The Trump administration should stop trying to shatter families and instead focus on supporting Americans as we struggle with a global pandemic and nationwide economic collapse."

The Human Rights Campaign and the National LGBTQ Task Force are among the LGBTQ advocacy groups that welcomed Thursday's ruling.

"Today, the Supreme Court put a speedbump in the road for Trump's attempt to use the lives of undocumented immigrants to drive his nationalist agenda," said National LGBTQ Task Force Executive Director Rea Carey. "The Supreme Court did the right thing by upholding the right of hundreds of thousands of DACA recipients, many of whom are LGBTQ, to stay in the U.S. to work, attend school and be protected from deportation."

The Supreme Court issued its DACA decision three days after it ruled Title VII of the Civil Rights Act of 1964 bans employment discrimination based on sexual orientation and gender identity.

Tony Lima is the chief operating officer of Arianna's Center, an organization that serves transgender women in South Florida and Puerto Rico. Lima during a telephone interview with the Washington Blade on Thursday noted he is the son of Cuban immigrants when he talked about the DACA ruling.

"As the son of immigrants who have had every opportunity in this country to go to school, to work, to thrive, I think it's a very exciting thing that the Supreme Court continues to support those that are most marginalized during this very difficult political time," said Lima.

D.C. Mayor Muriel Bowser is among the elected officials who applauded the ruling.

"'Dreamers' represent the best of us and our values as a nation of immigrants. 'Dreamers' are integral parts of our communities, creating jobs and growing our economy, attending our schools and universities, and helping us build safer, stronger neighborhoods," said Bowser in a statement. "Today's decision will help to end the uncertainty on whether they can stay and thrive in the only country they know as home."

California Attorney General Xavier Becerra — who is among the attorneys general from 20 states and D.C. who challenged the Trump administration's efforts to end DACA — echoed Bowser.

"Today, justice prevailed for every 'Dreamer' who has worked hard to help build our country — our neighbors, teachers, doctors and first responders," said Becerra in a statement. "Today, America told the Dreamers that this is their home."

"Dreamers are American citizens in every sense of the word," said the gay Democrat in a statement. "They were brought here as children. The president and his allies claim they are a burden on our country. To the contrary, they make rich contributions to our society every day."

And in California, lesbian state Senate President pro Tempore Toni G. Atkins (D-San Diego) noted that the Golden State has the most active DACA recipients of any state in the country, with more than 184,000 recipients, of which more than half are women.

"They are our family, neighbors, and friends, and their talents will help our state succeed for generations to come," stated Atkins. "This decision is a win for equality and immigrant rights, and rounds out a week in which it truly feels like justice, and the rights of the people, have prevailed. America needed the positive outcomes of the DACA case and LGBTQ workplace protection case more than ever, and these rulings reaffirm that focus, commitment, and courage can win the day."