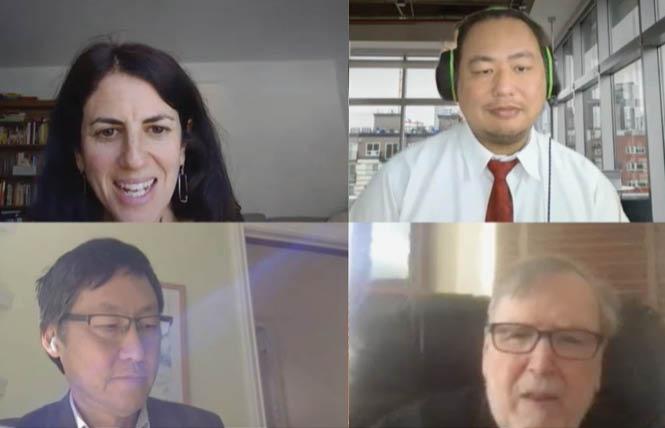 A unanimous Board of Supervisors Rules Committee on Monday recommended a gay man fill a vacant seat on the city's ethics commission.

Larry Bush, a Castro resident, was the only applicant for the seat. The term expires February 1, 2023.

During the virtual meeting June 8, Bush told committee members Supervisors Hillary Ronen (District 9), Catherine Stefani (D2), and Gordon Mar (D4) that this particular open seat has been designated for public outreach and education. Bush himself helped establish the ethics commission by assisting with drafting the charter amendment in 1994. He served on the Friends of Ethics citizen's group before resigning in 2018.

According to a San Francisco Examiner article at the time, Bush was angry that the commission and Board of Supervisors could not agree on a series of reforms to speed up revelations of big money backers funding super PACS and other items.

During the hearing, Bush commented on some ideas he has to make information more accessible to the public. These included searchable documents, rather than the unsearchable pdf materials that are used now, and enabling whistleblower complaints to have a record of when they are sent to the city attorney and district attorney.

"Right now, there's no record that they've been sent over or sent back," Bush said, referring to whistleblower complaints. "Those dots could be connected."

In a Facebook message to the Bay Area Reporter after the hearing, Bush said, "The appointment comes at a critical time."

"The board budget analyst [is] undertaking an audit of ethics, as is the mayor's request for the controller and city attorney to undertake a review and recommendations, and various proposals of board members," he wrote. "What's important now is to engage the public and not keep it in-house as a bureaucratic-only reform. I hope to be a part of that. If the full board approves my appointment I hope people will regard it as an open process."

Ronen brought up the need for the ethics commission to serve as a check in stemming local government corruption. As the Bay Area Reporter previously reported earlier this year, now-former public works director Mohammad Nuru was indicted on charges of corruption and lying to the FBI. He resigned after his arrest and the announcement of charges against him and a business associate by the U.S. Attorney's office.

"We should not have to rely on the FBI to keep San Francisco honest," Ronen said.

Ronen and Mar thanked Bush for his willingness to serve on the ethics panel.

If approved by the full board, which is expected to take up the matter at its June 16 meeting, Bush would succeed Lateef Gray and fill out the term. Gray resigned to take a position in the district attorney's office, Ronen said.

She also pointed out that when Gray applied, Bush decided not to in order to give someone else an opportunity to serve on the commission.

"I was so impressed by that," Ronen said.