Same-sex couples rush to the altar in Costa Rica 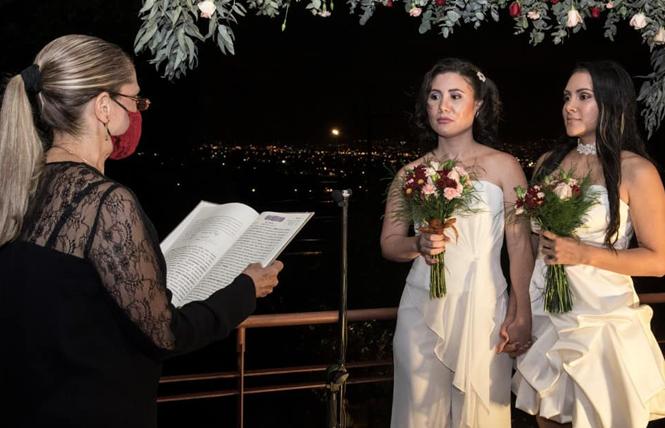 Costa Rica is the sixth Latin American country to grant marriage equality, and the first in Central America.

Same-sex marriage is legal in Argentina, Brazil, Colombia, Ecuador, and Uruguay, along with parts of Mexico.

Dressed in white and holding bouquets of flowers, Castillo, 29, and university student, and Arguedas, 24, a judicial technician, wed as thousands of people watched via public television and a livestream on social media.

The wedding was held in compliance with the country's rules and restrictions due to the global novel coronavirus pandemic.

Leading up to the wedding, a special three-hour documentary about Costa Rica's marriage equality battle was aired on public television.

The Civil Registry already had 55 requests for same-sex marriage registrations. According to Q Costa Rica, some couples married abroad months ago.

Among them, gay activist lawyer Marco Castillo and his boyfriend, Rodrigo Campos, who also married in the early morning hours after the new law came into effect, reported Thomson Reuters Foundation.

"It's a stepping stone toward equality that makes us keep up the fight for respect that those of us with a different sexual orientation deserve," Castillo told the media at the registry office in the country's capital city, San Jose, after they signed their marriage certificate and exchanged rings.

Costa Rican President Carlos Alvarado Quesada tweeted the day before the weddings were to commence that, "This change will cause a significant social and cultural transformation of the country."

"An extraordinary moment of celebration and gratitude to the work of so many activists and a quiet reflection of the lives of those who lived without seeing this moment," he wrote on Twitter.

Not everyone is ready for marriage equality in Costa Rica.

Cruickshank said he was "committed to defending the family as established and pleases our Heavenly Father."

"A legal change does not imply that there is a social change, but it is an enormous advance, a wonderful milestone in the history of Costa Rica," she told Q Costa Rica.

The runoff election followed on the heels of the Inter-American Court of Human Rights' decision on same-sex marriage and gender identity rights. The court ruled for Costa Rica, along with other Latin American and Caribbean countries, to legally recognize same-sex couples' relationships either by granting marriage or civil unions and gender identity protections if laws weren't already in place.

Quesada, a former cabinet minister for former President Luis Guillermo Solis, and the president, a member of the same party, both supported same-sex marriage and LGBT rights.

Marriage equality was a key platform during Quesada's campaign.

Same-sex marriage remained legally blocked by the ban, despite the court ruling. The country's Superior Notarial Council wouldn't issue marriage licenses to same-sex couples until the marriage ban was lifted by the country's constitutional court or legislative assembly.

Costa Rica's constitutional court struck down the ban in August 2018 and the court ordered lawmakers to legalize same-sex marriage within 18 months or it would automatically become law in November that year.

Legislators failed to act by the expiration date paving the way for same-sex weddings to begin last month.

The Transvanilla Transgender Association filed a constitutional complaint with Hungary's Constitutional Court on behalf of two unidentified transgender people impacted by the new law, according to a May 29 news release from the organization.

The organization declared the law unconstitutional and requested it to be annulled.

According to the release, the complaint is in addition to a case with 23 individual applicants being examined by the European Court of Human Rights.

Marie Cau, 55, won the mayoral seat of Tilloy-lez-Marchiennes by a nearly unanimous vote of the town's 550 residents in March's local elections.

She campaigned on social and environmental policies, reported the Agence France-Presse.

Cau, who transitioned 15 years ago and has resided in the village for 20 years, is a business manager and an expert in sustainability and agriculture, reported AFP.

The novel coronavirus pandemic slowed her receipt of the honorary sash of the office from the usual five days to two months, reported Republic World.

Managing the pandemic in Tilloy-lez-Marchiennes is her first action of business for the town that has an almost non-existent budget.

Malaysia's top court green-lights landmark anti-gay law challenge
The Federal Court of Malaysia on May 27 gave a green light for a Muslim man's challenge to the country's anti-gay Islamist law that criminalizes homosexuality.

The case was allowed to proceed May 14, but it wasn't made public until last week.

The test case mounted by a 30-something man, who's identity is being protected by his lawyer for his client's privacy, was filed following his 2018 arrest for allegedly attempting to proposition gay sex. The man denies the charges against him, reported Reuters.

He was among the 11 men arrested during a police raid of a party at a private residence in Selangor.

Five others pleaded guilty and were sentenced to jail, caning, and fines last year.

"This will be the first," the man's lawyer, Surendra Ananth, told the media outlet by phone.

The man claims that the central Selangor state, where he was arrested, had no power to enforce the Islamic ban when its already a crime under Malaysia's civil laws, reported Reuters.

LGBTIQ+ Network, a Malaysian coalition of 12 LGBT+ rights groups, praised the court's decision and expressed hope that it would limit harassment against the LGBT community.

Homosexuality is illegal in the Muslim-majority country under the British colonial-era anti-sodomy laws 377A and 377B. Individuals convicted under the law could be sentenced up to 20 years in jail under the civil penal code.

In 2018, two women were publicly caned for allegedly "attempting lesbian sex" under the Islamist laws in the east coast state of Terengganu. That same year, a transgender woman was attacked.

Malaysia has 13 states that operate on a dual-track legal system governing Muslims under Islamist laws and other citizens under the country's civil laws.

Surendra expects the court to hear arguments by the end of the year.

"[If we win], the state law will be struck down and the criminal charges in the Sharia court should be dropped," he told Reuters, adding he hopes the case will set a precedent for other Malaysian states with similar laws.

HRW calls for Turkmenistan to release suspected gay men
A high-profile Turkmenistani actor, along with nearly a dozen other men, was sentenced to two years in prison for gay sex last month.

The actor, identified in court documents as G.S., was sentenced for committing sodomy.

G.S., along with his unidentified boyfriend, and the other men were arrested sometime in mid-March, reported Turkmen News on April 15.

The celebrity and some other men known in the entertainment and modeling industries were sentenced May 7, according to the organization.

The news became public outside of the Central Asian country due to HRW's May 26 news release.

HRW called the law "blatantly discriminatory" and pointed out that it violated Turkmenistan's international rights obligations, along with enabling "police to subject gay and bisexual men to harassment, including with the purpose of extortion, humiliation, and abuse."

But authorities have rejected the international criticism based on the country's criminalization of homosexuality, reported the Turkmen News.

HRW called upon the Turkmenistan government to drop all charges against the men and release them.