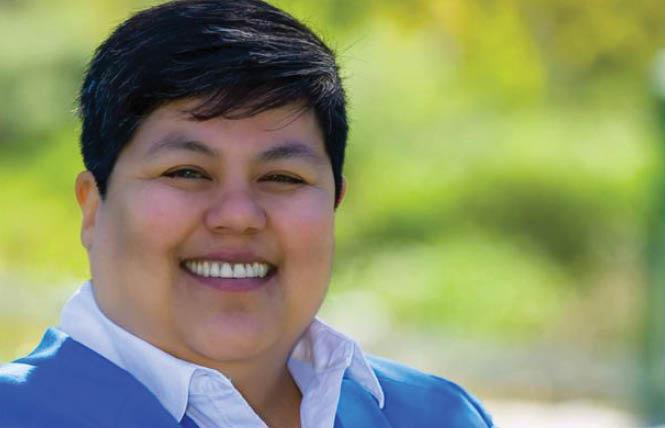 As she heads into a rough summer and fall campaign season, queer San Diego City Councilwoman Georgette Gómez has picked up the endorsement of the Human Rights Campaign. It is one of the last major LGBT rights organizations to endorse in the race, where two Democratic leaders are fighting for the open seat on the November ballot.

In the March 3 primary contest former Hillary Clinton campaign adviser Sara Jacobs, a straight ally, took first place with 29.1% of the vote. Gómez nabbed second place with 20% of the vote to advance to the fall contest, while the rest of the votes were shared among 13 other candidates.

Jacobs and Gómez are now in a heated race for the 53rd Congressional District seat. The incumbent, Congresswoman Susan Davis (D-San Diego), opted not to seek re-election this year.

In announcing its support for Gómez May 26, HRC noted the San Diego native made history in 2018 when she was unanimously elected as the first LGBTQ Latinx city council president. Gómez now has the potential to become one of the first openly LGBTQ Latinx members of Congress from any state.

"Georgette Gómez is a true changemaker and a champion of the LGBTQ community," stated HRC President Alphonso David. "Whether it was against deep-pocketed special interests or outsiders dictating what San Diegans needed, Gómez has always worked harder and smarter to achieve real change for San Diego."

Noting she was "proud" to have HRC's backing, Gómez pledged that if elected she would work with the organization "to pass the Equality Act, and make sure that everyone can live openly no matter who they are or who they love." The federal law would enact LGBT non-discrimination protections in a host of areas, like housing and employment, across the country. It was passed by the Democratic-controlled House but faces no prospect of being approved by the Republican-held Senate.

If she wins, Gómez would be only the third LGBTQ community member elected to Congress from California. In January, she picked up the backing of the LGBTQ Victory Fund, which is also supporting the reelection bid of the state's first out House member, gay Congressman Mark Takano (D-Riverside).

The first out woman among California's congressional delegation, bisexual Congresswoman Katie Hill, resigned last year following reports of an improper sexual relationship with a staffer, which she has denied, and the publication of nude photos of her. No out candidate ran in the special election to fill her 25th Congressional District seat north of Los Angeles. Republican Mike Garcia was elected, and he will now face Democrat Christy Smith in November as they compete to win a full-term.

Takano and Smith both have the backing of HRC, which this week announced a slew of endorsements for incumbent House members in California, all of whom are Democrats. As of May 27 HRC has now endorsed the reelection campaigns for the entire Bay Area congressional delegation.

Gómez and Jacobs are facing the prospect of having to campaign almost entirely by virtual methods or over the phone due to the novel coronavirus outbreak. It is unlikely they or any candidate this year in the Golden State will be able to host large in-person campaign events or send groups of volunteers out to canvass neighborhoods by knocking on voters' doors.

Most LGBT leaders in the state have lined up behind Gómez, who also secured the support of the state's Democratic Party and brought on former San Francisco Mayor Willie Brown as one of the co-chairs of her national finance committee. The others are state Senate President Pro Tempore Toni Atkins and former state Senator Christine Kehoe, both lesbian leaders from San Diego, Takano, and gay Congressman David Cicilline of Rhode Island.

As for Jacobs, her most high-profile LGBT endorser listed on her campaign site is gay Colorado Governor Jared Polis. On the board of statewide LGBT advocacy group Equality California, Jacobs last fall split EQCA's endorsement along with Gómez.

The day that HRC endorsed Gómez, Jacobs emailed her supporters asking them to sign a petition calling on federal health officials to end their discriminatory policies toward gay and bisexual blood and plasma donors. Already an issue prior to the current pandemic, the anti-LGBT blood donor rules have gained renewed attention due to blood banks reporting shortages as people shelter in place to help stop transmission of the novel coronavirus and avoid medical settings.

The federal Food and Drug Administration did relax its rules due to COVID-19 to allow gay and bisexual men who have not been sexually active in the past three months to donate. The policy, which also impacts some transgender and nonbinary people, had previously said only those who had abstained from sex for the past year could donate.

But it is not allowing gay and bi men who recovered from COVID-19 to donate their blood plasma that contains antibodies found to be effective at treating others newly infected. LGBT advocates and health professionals continue to argue the FDA's donor policies make no sense.

As Jacobs' email noted, "There is no scientific reason to continue this institutionalized homophobic, biphobic, and transphobic practice. Medical experts agree that we can safely lift the ban and save more lives as a result. It's time to call the FDA's ban what it is: unscientific, discriminatory, and wrong."

On April 14 Gómez had posted on her Facebook page a photo of herself wearing a mask while she donated blood and asked others to do so.

"I'm not a huge fan of needles but I was glad I could help the San Diego Blood Bank this weekend out with a donation. Please consider giving if you are able," she wrote.