Online Extra: Richard Grenell to step down as US ambassador to Germany 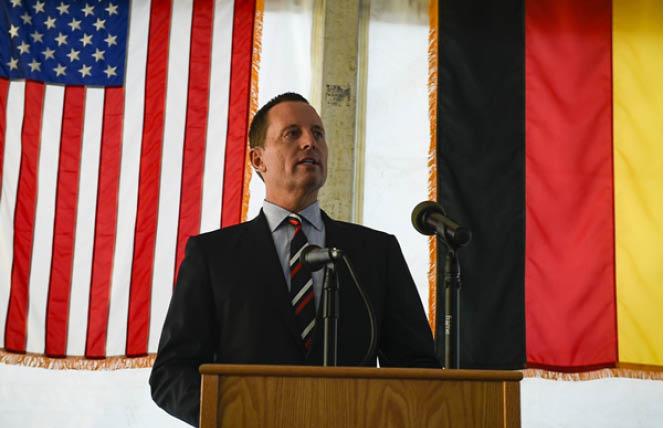 U.S. Ambassador to Germany Richard Grenell plans to step down from his post.

Grenell on Sunday (May 24) in a tweet confirmed a German media report that says he will formally leave the ambassadorship in a "few weeks."

Fox News on Sunday reported Grenell in March told the White House he planned to step down as ambassador once his tenure as acting director of national intelligence came to an end.

The U.S. Senate on May 21 confirmed U.S. Representative John Ratcliffe (R-Texas) as the next DNI.

A spokesperson for the U.S. Embassy in Germany on Monday declined to comment to the Washington Blade on media reports about Grenell's decision to step down. Grenell on Twitter thanked U.S. Senator Marsha Blackburn (R-Tennessee), Israeli Ambassador to Germany Jeremy Issacharoff, and others who praised his tenure.

He is one of five openly gay ambassadors under the Trump administration. Grenell in February became the highest-ranking openly gay presidential appointee in American history when the White House named him acting DNI.

The U.S. Embassy in Germany last summer hosted a group of LGBTQ rights activists from around the world. Grenell and U.S. Ambassador to the U.N. Kelly Knight Craft late last year organized an event on the sidelines of a U.N. Security Council meeting that focused on efforts to decriminalize homosexuality around the world.

Grenell, among other things, publicly criticized Brunei over a provision of its new penal code that sought to impose the death penalty for anyone convicted of consensual same-sex sexual relations. Grenell also faced sharp criticism in Germany and from LGBTQ advocacy groups in the U.S. and elsewhere because of his outspoken support of President Donald Trump.

German media reported Robin Quinville, deputy chief of mission at the U.S. Embassy in Germany, will likely succeed Grenell on an interim basis.