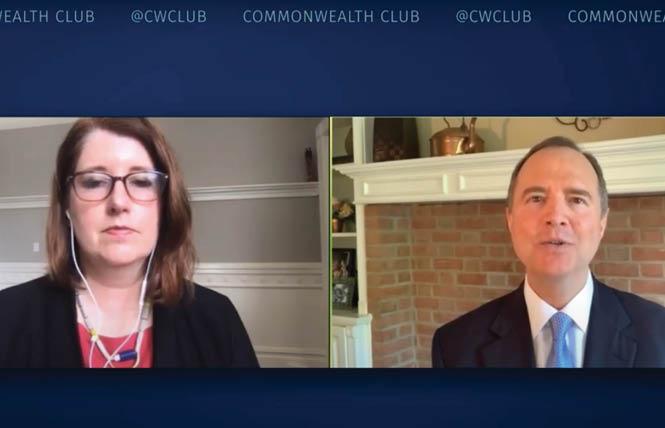 Congressman Adam Schiff, who made headlines as the lead House impeachment manager during the trial of President Donald Trump earlier this year, participated in an April 29 virtual town hall with the San Francisco-based Commonwealth Club of California during which he discussed the federal response to the coronavirus outbreak.

Schiff (D-Burbank), whose district includes the heavily LGBT West Hollywood, said that the "best approach" to deal with unemployment caused by stay-at-home orders would be for the government to pay everyone's salary to keep people financially afloat and avoid disruptions in the labor market.

During his Commonwealth Club talk, Schiff said he talked with counterparts in European and Asian countries that are providing payroll protection.

"That seemed to me much more equitable and efficient," Schiff said. "People got to retain the jobs they already had, even if they couldn't perform them."

"Germany has maintained their pre-pandemic employment, but America has made a decision to have people go on unemployment rolls. That's not good for America," Schiff added.

Schiff prefers government payroll protection to universal basic income as a way to deal with the economic crisis triggered by the shutdowns. Millions of Americans received a form of UBI this month in stimulus checks sent directly to individuals by the federal government as part of the Coronavirus Aid, Relief, and Economic Security, or CARES, Act.

The discussion was moderated by Clara Jeffery, editor in chief of the San Francisco-based progressive magazine, Mother Jones.

Ghosts of impeachment
Schiff has been one of the most prominent Democrats in the state and country as the chair of the House of Representatives' intelligence committee.

In that capacity, Schiff oversaw the impeachment hearings last fall and was the lead impeachment manager (or prosecutor) during Trump's Senate trial. Trump was impeached by the House but was not removed from office as the Senate acquitted him February 5.

Schiff said he is "haunted" now by comments he made during the Senate trial.

"You may be asking: how much damage can he really do in the next several months until the election," Schiff rhetorically asked the senators in January. "A lot. A lot of damage."

"I don't think I ever could have anticipated we would very soon lose more lives than in the Vietnam War, significantly due to the incompetence and maladministration of this president," Schiff said during the Commonwealth Club talk. "We underestimated the damage. I don't think in my worst nightmare we'd have a crisis so large and managed so poorly at such a dramatic cost."

Schiff brought up parallels between the central quid pro quo of the impeachment — the Ukrainian president was offered U.S. military aid that had already been approved by Congress in exchange for announcing he would investigate Democratic presidential candidate Joseph R. Biden Jr. and his son for alleged corruption — and the way in which Trump is handling coronavirus aid.

Schiff noted that California was second-to-last in access to small business funding approved by the federal government as part of the CARES Act.

Schiff said that while some people try to paint Trump's behavior as the result of incompetence, and others as the result of evil intentions, the lens through which he views it is a lack of individual restraint.

"One of the arguments we made during the trial is that you are not going to be able to constrain him," Schiff said. "He will continue to do what he wants to do."

Oversight in a time of pandemic
Schiff said he hopes (once the worst of the pandemic has passed) to have a blue ribbon commission investigate the federal response to the coronavirus, like those set up in the wakes of the assassination of President John F. Kennedy and the terrorist attacks of September 11, 2001.

He said that the Bush administration opposed the creation of the 9/11 commission, but that the families of victims pushed for it, and he believes people affected by COVID-19 in both parties will do the same.

"It was the victims who came together and became a potent force who demanded answers. I fully suspect that is going to happen here," Schiff said. "The virus is not going to discriminate on the basis of Trump supporters or Trump opponents."

Schiff said that congressional leaders received limited information on the pandemic in January and February, having only recently passed bipartisan legislation in late 2019 to require the intelligence community to report on American posture toward disease outbreaks following the presidents' dissolution of the pandemic response unit in the White House.

"We did get some briefings. We held a hearing the day of the verdicts (in the impeachment trial)," Schiff said. "It's too early to say if the (intelligence) community did a good job or a poor job on what it was seeing in China. We don't yet know what the president was seeing."

Schiff said that there has been "a tremendous politicization" of the intelligence community, particularly since officials who testified against Trump in the impeachment proceedings resigned or were forced from their jobs.

He mentioned Richard Grenell, the acting Director of National Intelligence and the first gay man to hold a cabinet-level position in the U.S. government, as someone who is negatively affecting the reliability of intelligence information. Grenell is "essentially a Twitter troll," the congressman said.

"Can we count on a loyal partisan of the president to reveal the facts of this threat," Schiff rhetorically asked. "At the end of the day, we will find the truth."

The intelligence committee will have a tougher time providing real time oversight, though that is "vitally important," than other congressional committees, he said, because of the classified nature of much of the material that is discussed at its meetings.

Top-secret government materials shouldn't be considered in an online setting, Schiff said, and he hopes to have the committee back to provide oversight — though in a somewhat physically distanced form.

Congressional oversight has already yielded important information, such as finding out that there wasn't as much personal protective equipment as the White House had stated, and the fact that a $10 billion contract for cloud computing expected to be awarded to a critic of the president was awarded to another company.

The inspector general who was supposed to oversee some $500 billion in federal funds for industry (including the $10 billion mentioned above) was dismissed by the president.

Schiff said that he soon expects the full House will be able to vote on legislation without having to physically assemble in the U.S. Capitol in Washington, D.C., having previously dropped the ball on similar proposals during the Cold War and after the September 11 attacks.

"Maybe (Congress) didn't want to think of its demise," Schiff said, after which Jeffery commented that representatives should watch more disaster movies and Schiff agreed, noting that he represents Hollywood in the People's House.

At the end of the talk, Jeffery asked if Schiff would want to become a U.S. senator from California if Biden picks Senator Kamala Harris as his running mate (the former San Francisco district attorney is reportedly on his short list), and the ticket wins the election.

"This is not the time or place to express an interest in that," Schiff said — as his face visibly blushed.

For the April 30 EQCA event, the statewide LGBT rights organization is asking that people purchase a ticket for $25, though they can watch for free. To RSVP, click here.